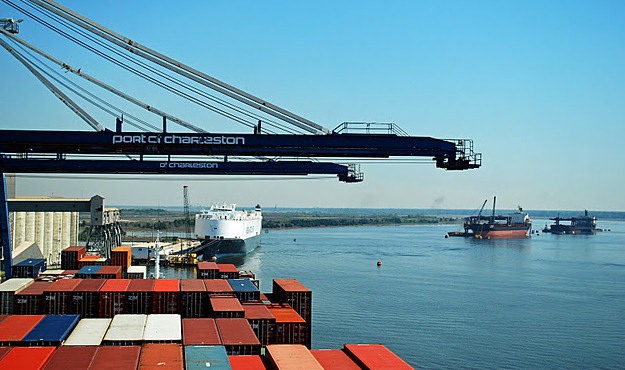 ALSO, FORECAST CALLS FOR “SLOW GROWTH” IN GLOBAL SHIPPING IN THE DECADE TO COME

The Port of Charleston’s new 52-foot depth – secured via a $300 million direct appropriation from taxpayers – won’t make the government-run facility any more competitive in the battle for global shipping business.

That’s according to Dr. Asaf Ashar, a port expert and research professor emeritus with the National Ports and Waterways Initiative (NPWI).

Asked whether the port’s much-ballyhooed dredging project would provide it with a competitive advantage over its east coast neighbors, Ashar had a blunt answer.

Charleston used to be one of the nations’ top five ports.  Now it barely ranks in the top ten.  Meanwhile, the government that runs its facilities has totally squandered its chance to build a facility on the last, best deepwater port location on the eastern seaboard (in job-starved Jasper County).

Well, with a little help from S.C. governor Nikki Haley.

Anyway, according to Ashar the global competition for shipping business isn’t exactly heating up, either.  We asked him to look into his crystal ball over the coming decade.

“My general forecast is for slow growth, following similarly slow growth in the U.S. (gross domestic product),” he said, adding that this downward pressure would be “exacerbated” by an uptick in the re-shoring of manufacturing jobs.

That’s consistent with what those in the manufacturing industry tell us, too.

“It’s interesting because as products and processes become more complicated and high tech, they’re coming back to the United States because it’s too expensive to do that kind of work overseas where you see a lack of that talent, and the process requires a whole another level of skills and education to produce the goods well,” one Palmetto State manufacturing expert told FITS.

This website supported the dredging project … arguing that state government was at long last spending taxpayer money on something with a tangible economic benefit for the entire state (not a narrow handout to a specific business).

One thing we do hope: That the Jasper County project is permitted to leverage private investment, because it’s abundantly clear at this point South Carolina’s lack of prioritization on core functions of government is pretty damn dangerous.