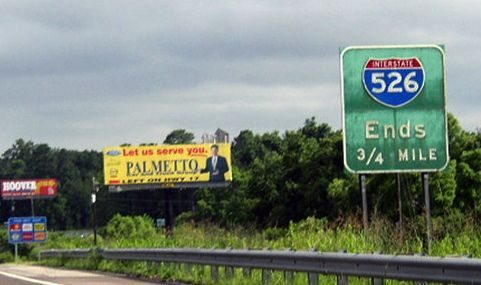 This website has consistently opposed the totally unnecessary, obscenely expensive Interstate 526 project in Charleston County, S.C. This eight-mile, $558 million project – which has negligible public benefit and dubious local support – is a poster project for everything that’s wrong with highway funding in the Palmetto State.

Seriously … state lawmakers bitch and moan about not having enough money to care for our roads and bridges (and borrow tens of millions of dollars to care for them) yet somehow always find the cash for boondoggles like this one. Oh … and contracts for powerful elected officials.

Last fall the S.C. Department of Transportation (SCDOT) correctly voted against this project – although given the influence aligned in support of 526 we noted that the battle was far from over.

“There are some incredibly powerful politicians still pushing this boondoggle, including S.C. House Speaker Bobby Harrell and City of Charleston, S.C. Mayor Joe Riley. And trust us, they’re not just going to let this thing die,” we wrote at the time. “Also, one rejection doesn’t mean that our state has fixed its root problem – which is the fact that political pressure, not the merit of a particular project, is what drives highway dollars in South Carolina.  Until that issue is addressed, we will continue to see money wasted as needs go unmet.”

Well guess what … political pressure has won out.

This week, the SCDOT was prepared to take another vote blocking the project, but a so-called “fiscal conservative” – S.C. Sen. Larry Grooms (R-Berkeley) – had the item removed from the board’s agenda.

“I called a few folks and the agenda was changed,” Grooms admitted to reporter Diane Knick of The (Charleston, S.C.) Post and Courier.

Not only did he prevent the SCDOT from blocking the project, Grooms added “I hope it doesn’t come up again.”

We called Grooms out on this act of treachery and received a laundry list of excuses. 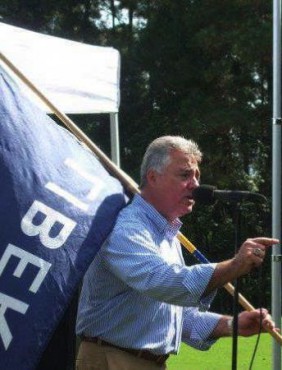 “I believe that there are higher priority projects in Charleston County than the extension of I-526 and that Sate Infrastructure Bank (SIB) projects should also be subject the prioritization ranking of Act 114,” Grooms told us. “Under Act 114, the 526 extension would fall behind other projects. I regret that I was unable to convince my colleagues to extend prioritization criteria to SIB projects and I will continue to push for common sense reforms of the SIB.”

Okay … but why wave the white flag?

Grooms added that he was eager to avoid a “default by the SCDOT regarding their obligations (that) would have long term negative implications in moving forward with any large transportation projects involving multiple parties.”

“It would also have set the dangerous precedent of one DOT Commission voiding the obligations created by a previous a previous DOT Commission,” Grooms said. “Actions of the DOT must be consistent and legislation extending prioritization to all highway projects (including SIB projects) should be passed by the General Assembly.”

No offense to Grooms but we call bullsh*t.

Several years ago, Grooms and his fellow lawmakers told us they had “reformed” the SCDOT so that transportation projects in the Palmetto State would be chosen on their merits – not at the whim of powerful lawmakers like Harrell.

If SCDOT was truly “reformed,” then why are taxpayers being hit with new fees and fines to subsidize essential repairs while hundreds of millions of dollars go to projects like this one? Also why is South Carolina – the nation’s fortieth-largest state in terms of geography – still subsidizing the fourth-largest network of state-maintained roads in the nation?

But we don’t expect so-called “taxpayer heroes” like Grooms to accommodate them … and make excuses for them.

Grooms sold us out on this one … and as a result we will think long and hard before we ever endorse him for higher office again.