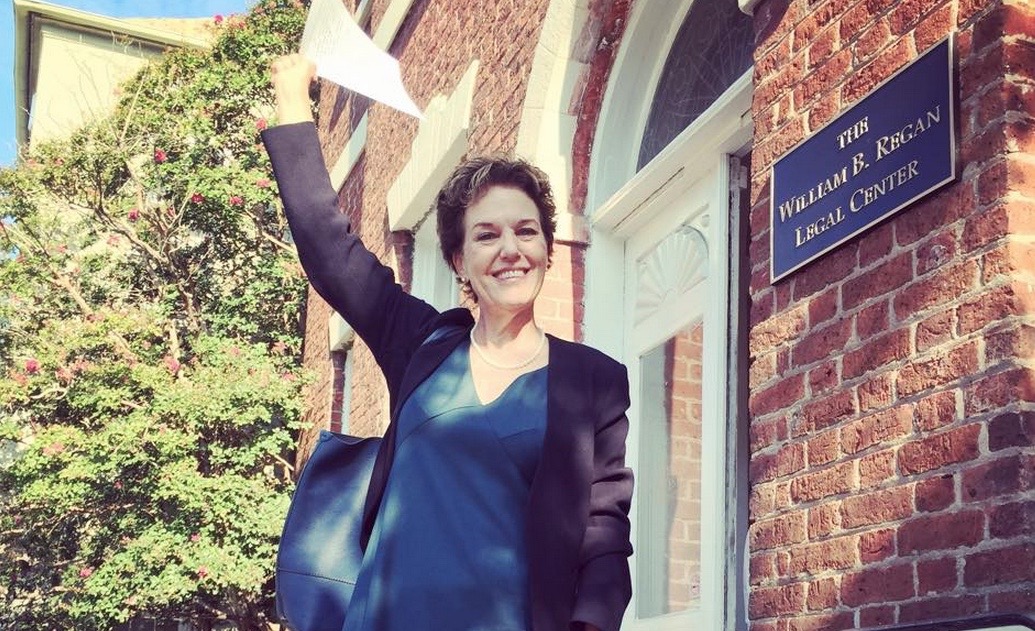 || By FITSNEWS || One of the candidates for mayor of Charleston, S.C. made the city’s infrastructure issues part of her formal filing for office.

Ginny Deerin – a nonprofit director who ran unsuccessfully for S.C. Secretary of State last year – drove herself across town from her home in West Ashley to file the paperwork to run for mayor.

“It’s official! After sitting in traffic on Ashley River Road, hitting some potholes and looking for parking, I’m formally filing my candidacy for Mayor of Charleston,” Deerin said. “I’m running for mayor to preserve and protect the Charleston we love, and that starts with comprehensive and bold action on transportation so we’re not all stuck in traffic.  I am the only candidate with a transportation plan for Charleston.  My experience points to a record of thinking big and getting things done – which is exactly the approach I’ll take as a candidate and as a mayor.”

Worth considering, though?  Charleston has received a disproportionate share of state road funding in recent years.  In fact one powerful state Senator recently said lawmakers in Columbia, S.C. had been “force feeding asphalt to the coast, while the Upstate and many rural areas starve.”

So the fact Charleston is still having infrastructure problems ought to tell you a little bit about how poorly this particular core function of government has been managed.

Anyway, Deerin is one of six candidates seeking the post.

The frontrunner?  S.C. Rep. Leon Stavrinakis – who is known affectionally around the Palmetto State House as “short stack.” In fact the diminutive Stavrinakis has already reportedly reached out to S.C. Rep. Jimmy Merrill and offered him a position as chief of staff in the event he wins the election.

This race needs Kwadjo Campbell to um light things up.

Shouldn’t she be running for mayor of Sullivan’s Island?

The fact that she has obviously paid FITSNews to run this propaganda BS not only places her intelligence into question, it sullies her character.

Lot of political caracesses produced by this website. Far more losers than winners.

Did she say to mind her wood?

Folks plays for pay? Who knew?

The People want to know, where the hell is Nikki and what the fuck is she doing to secure her well deserved place in History

… prolly fuckin’ whoever and whenever that promises her a leg up on VP or other desired appointment, like ambassador to India…

This is kinda like, “if you live outside Charleston, who cares.”
But, it seems she is the man for the job.

She’s at least as much of a man as Riley is.

Which makes her twice the man you are.

But I’m afraid of Dykes …

Yep, and the US Army Corps of Engineers escaped with their jobs anyway.

What was it? Other than what looked like some rather shapely and attractive female leg at the very beginning, I didn’t get anything but some lights, wind noise, and the most irritating, exaggerated, laughter ever heard.

it must have meant something to somebody, but what — and who?

I like the ones that are really fem or reasonably fem. When I was in Elementary School, our teacher read us a story about this little boy who stuck his peter in the dyke. Apparently it made her really wet and the people in his village cheered him for doing that. I believed that story and wanted to be like that little boy ever since I heard it. Been trying to find a dyke that will let me stick my peter in her ever since with no luck.
:’-(

She lives on Sullivan’s Island, not West Ashley. Which, by the way, is not in city limits. She “rented” a townhouse West Ashley so she could run…best Charleston can do? Also her transportation “plan” looks like a political prop and would cost at least $1.5 BILLION. Who foots that bill?

Isn’t Ginny asshole buds with Jenny Sanford? That right there should be enough to remove her from serious consideration.

Yep. She would give her lover Jenny a job if elected. Charleston needs a black mayor.

Frankly, I’m very surprised someone hasn’t tried to cash in on this year’s horiffic, racially motivated incident for the political capital needed for the coup. I guess millions of dollars of Federal largess doesn’t buy what it used to.

I think the fact that officials of the government not being involved made it a horse of a different color.

Some screwed up kid that didn’t even live there, isn’t exactly the same as a paid public employee preforming their official duties.

Infrastructure improvements should be a priority for any candidate running for mayor, after Joe Riley ignored infrastructure for years in order to build his legacy projects. Ruptured gas and water lines are a daily occurrence in Charleston. When the gas lines rupture, the fire dept responds until SCE&G can make the repairs. Some of the pipes are over 100 years old and have been buried in the salt water mud that is only a few feet below the street surface. When Charleston has its next major earthquake (a 6 to 7 on the Richter scale) the pipes will rupture, releasing explosive gas into the air. The city will be so overwhelmed by the extensive damage and building collapses that it will be unable to make emergency gas line repairs before the fires start. Ruptured gas lines, fires, and historic buildings after an earthquake will result in a nightmare scenario. I applaud Ginny for addressing infrastructure improvements.

Actually, gas lines would be SCE&G’s domain, not the city’s. Nice try though.