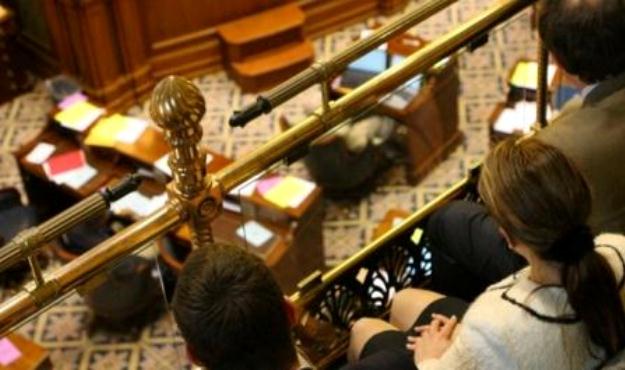 || By FITSNEWS || At least three South Carolina State Senators who voted to remove the Confederate flag from the grounds of the S.C. State House have received death threats in the wake of the vote, sources in the chamber tell FITS.

Two of the three reported the threats against their life to the S.C. State Law Enforcement Division (SLED), resulting in at least one ongoing investigation – sources at the agency tell FITS.

Last week we reported on lawmakers receiving threats over the flag … but those didn’t appear to be especially serious.

According to state law (S.C. Code § 16-3-1040), it is unlawful “for a person knowingly and willfully to deliver or convey to a public official or to a teacher or principal of an elementary or secondary school any letter or paper, writing, print, missive, document, or electronic communication or verbal or electronic communication which contains a threat to take the life of or to inflict bodily harm upon the public official, teacher, or principal, or members of his immediate family.”

Violators can receive a $5,000 fine or a prison sentence of up to five years.  Or both.

Senators voted 37-3 this week to remove the flag from the north lawn of the State House in the aftermath of last month’s horrific, racially motivated “Holy City Massacre” – the mass murder of nine black churchgoers at the Mother Emanuel AME Church in downtown Charleston, S.C.  The Mother Emanuel victims – among them S.C. Senator Clementa Pinckney, the church’s pastor – were gunned down during a Bible study by Dylann Storm Roof, a 21-year-old white supremacist who used the Confederate flag as his calling card.

The measure will be voted on one additional time by Senators before heading to the S.C. House of Representatives – where it will have to navigate a contentious debate over a proposed replacement banner.

House members have three options: They can pass the Senate bill, amend it or vote it down.  If they amend it, the Senate would have to concur with any changes prior to the legislation being sent to S.C. governor Nikki Haley – a former flag supporter who now says she wants the banner to come down.

This guy is a cult leader. For real, he advocates cutting ties to friends and family that don’t buy into his cult’s views, which he calls DeFOOing. His wife is a “therapist” and was found guilty of professional misconduct for being associated with this kind of crap.

He is an idiot. A very dangerous, cultish idiot.

I agree. On occasion he still makes good points, logically- but he himself is an emotional train wreck.

He gets WAY too far into people’s very personal lives/decisions. He could simply make his “defoo” argument and leave it at that…but no…he has to be the busybody white night trying to save each kid.

Here’s the mind fuck though, he was the product of a shitty parent(s)….so I suspect his boundary issues are a result of his own inner demons.(he’s admitted it before)

Still yet, he’s right about Dylan Roof & the Confederate flag despite the fact at times he shows poor decisions making.

Yes, in a Venn diagram, he can be a crazy cult leader and correct in his assessments, a dangerous combination. Had a Logic teacher once say “The truth is not the sole property of the sane”. don’t know if he was re-quoting someone.

NBC News totally flubbed Nikki’s name today. They reported the Senate passed the measure, it would head to the House today and could be ready for Governor Nikki Hardgrave or something like that. Guess that national name recognition theory ain’t working.

Stephen and your eight “likes”, continue to grasp at that straw tightly.

Only one person is creepy, vile, and hateful enough to do this.

I am Mr.Smith’s attorney. We will be in touch.

Stay away from him!

Nice touch, but any lawyer worth his salt would check just who he is defending, and any lawyer with an ounce of gray matter would know someone who talks like pogo will never win a case of any sort. Trolls getting trolled is a joke of a court case.

Who do you think you are?You come on here as STNTwist-write TWO ‘Dear
Will’ whiny ass letters that contributors are being mean….apologize
for that….switch to Garbage…Frank Right and now Sybil-accusing and
libeling a tv personality of being KKK and a racist while threatening to
release information and files on your political enemies…attacking
posters personally and questioning their intelligence(TGB)

Apparently with 6 year-old child wondering-WHERE THE FUCK IS MY MOMMY! LMAO!!!!

Lady you crazy or a drunk!

ain’t that sweet…a socialist professor giving aid and comfort to a dead beat mommy and daddy.

Damn.Somebody just shit their pants.You lib/soc can dish but you sure can’t take it! Carry on.

You and GrandTango love to talk about soiling yourselves. We all know you’re faking the lawyer thing.

The dying gasp of the haters always ends in threats. Carry on Legislators – you’re almost there.

Kinda like Obama losing the House and Senate then declaring a lawless war on the American people and Constitution?

Good point.We elect people in our Representative government to carry out policy and vote our wishes.If South Carolinian’s don’t like the way their representative votes, they can elect someone else.Ain’t gonna happen.

Republicans in the SC Senate and House know they have safe seats as Obama has made the state RED + for the next 100 years.Sanford ran against Pelosi and Haley ran against Obama.

The Confederate Flag is coming down because the RNC wants it down prior to 2016.Haley was smart to get ahead of the violence and looting although I disagree with her decision to remove the flag.

Will just make it easier to remove the American Flag next time. Democrats/leftists are as a majority Godless/Souless/lawless(see sanctuary cities) and think of politics as war-Republicans as a majority are people of faith,love their country and believe in the rule of law.Problem is Republicans are appeasers.

SCOTUS also ruled that women could murder their own unborn child. Doesn’t make it right and actually is closer to the cause of the Charleston shootings than the Confederate Flag.

Legalized abortion devalued human life and why a generation of children appear hopeless and without direction.Dylan Roof is a product of Roe V. Wade.

SCOTUS didn’t rule on the ‘constitutionality’ of Obamacare OR gay marriage.

Obamacare was upheld FOR NOW UNTIL REPUBLICAN PRESIDENT.They passed the ‘buck’ back to the legislatures and avoided a train wreck until 2016 elections.

Read the dissents on gay marriage and Kennedy.Kennedy said everybody deserves to be loved.That decision had nothing to do with the law.Why we are seeing people filing lawsuits for polygamist and other types of perverted marriage now.

You are correct. It is the law of the land-for now.Obamacare will eventually go away-the perversion of what will come out of the gay marriage decision will have to shock this country into a real ‘awakening’ before that will be reeled in.

FOR NOW UNTIL REPUBLICAN PRESIDENT – Dream on buddy. Jeb ain’t gonna touch this with a ten foot pole. It’s a loser to mess with the insurance markets again. It would cost him the House. Unlike his brother, Jeb’s the smart one.

With gerrymandering not a CHANCE pubs could lose the House.
ZERO.

All politics is local in these districts and the SCOTUS gay marriage decision will destroy Democrats.

Yes they did rule on the constitutionality of Obamacare, specifically the mandate.

If it ain’t your fetus, what do you care?

lol…you were probably just fucking dumb enough to walk around telling family and friends, ‘hey, my wife is going to have a fetus’!

You’re blaming Dylann on Roe v. Wade? If he had been aborted we wouldn’t be having this conversation.

The flag is coming down because the State Legislature and the citizens of this state want it down. No one wants to remove the American flag, true patriots died for that flag. That flag is a symbol of freedom all over the world. The RNC has nothing to do with it. The American flag represents freedom and equality. Freedom to purchase affordable insurance on the exchanges. Freedom from annual coverage caps, and lifetime caps that destroy a family, or ensure a patient cannot afford treatment. Equality to be treated fairly under the rule of law, to marry the partner of your choice, to live in happiness and love with your significant other. It’s a beacon that brings to our shores (and across the rivers) those seeking a better life, a chance to provide a better future for their families based on hard work, sweat and toil. So get off it Flip. Have you found your SCOTUS yet?

It’s a shame that stupid people don’t know their place any more.

Whew. Glad the haters will all be dead when the flag comes down.

Someday, you too will be able to touch type, spell and think critically….

You could support corporate welfare and thousands of US troops dying for nothing.

by The Hill Holder sees possible DOJ deal with Snowden

Government leaker Edward Snowden may some day be able to strike a deal to return to the U.S. without jail time, according to former Attorney General Eric Holder.

In an interview with Yahoo News published on Monday, Holder threw cold water on the notion that the former contractor — who has been holed up in Moscow for two years — would never again step foot on U.S. soil.

“I certainly think there could be a basis for a resolution that everybody could ultimately be satisfied with,” Holder said. “I think the possibility exists.”

During the interview, Holder also appeared to go further toward praising Snowden’s actions than other members of the Obama administration have been willing to do.

“His actions spurred a necessary debate,” Holder told Yahoo News, and “we are in a different place as a result of the Snowden disclosures.”

It’s a great term. Usefully offensive but not racist. Used to be “poor white trash” but many are poor no more.

White Trash is a term that is used to describe worthless white people that choose to live on social programs without making any real effort to better themselves. It also refers to those that have no respect for their property or the property of anyone else. These people often have a racist point of view but not always. Many associate and emulate blacks that have chosen to live in a similar manner and vice versa. While it is a derogatory term it can also be considered a racist term because of the word white. To eliminate racist overtones this group of people should be referred to as trash, regardless of their skin color. These are usually the southerners that the national media chooses to interview after a natural disaster.
This group should not be confused with those that need government assistance and are working to improve their situation in life so that they no longer need government assistance.
A hand up not a hand out.

Yeah, like the black folk have such a calm and rational demeanor.

Weird that they just targeted 3. Seems like the death threat guys have a rather tenuous grasp of math.

When I was a kid,my father was part of the real civil rights movement.He’d joined the NAACP in the 1940’s.Death threats were common.