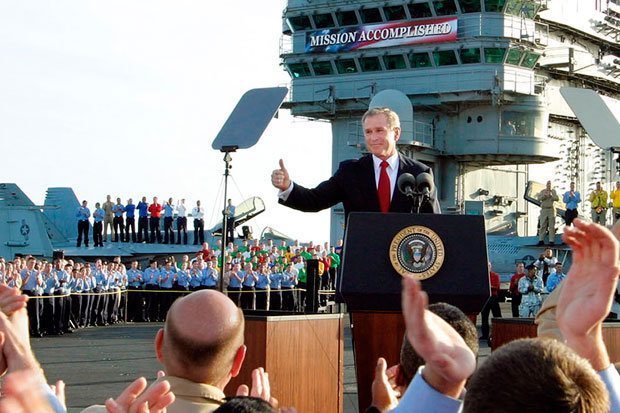 First, the 30,000-foot view: The 2016 presidential campaign is taking place against a backdrop of heightened support for U.S. military invention (and the ever-escalating price tag that goes with, um, “national defense“).  Sure it was all the result of some relentless (and ongoing) scaremongering, but whatever … the bottom line is America (especially early-voting South Carolina) is in a tizzy.

Don’t believe us?  Read this story.

Things have gotten so crazy that even non-interventionist Rand Paul has become something of a warmonger (although he doesn’t like getting called out for it).

Against this broader backdrop, though, is a general acknowledgment that the once-concluded – now rebooted – Iraq War was sold to the American public via a pack of lies.  And that this pack of lies – spoon fed by former U.S. president George W. Bush – will hurt the presidential ambitions of former Florida governor Jeb Bush.

Anyway, we’ve long maintained the most compelling indictment of America’s last “rush to war” – and the costly quagmire it created – was a skit performed by comedian David Chappelle for Comedy Central.  We’re written about “Black Bush” on several occasions (HERE and HERE) but the clip bears re-watching …

What is Jeb Bush’s view on his brother’s war?  Would he have invaded Iraq, too?

“I would have and so would have Hillary Clinton, just to remind everybody,” Bush recently told Megyn Kelly of Fox News. “And so would almost everybody that was confronted with the intelligence they got.”

Of course Bush acknowledges the intelligence was “faulty.”

“In retrospect the intelligence that everybody saw – that the world saw, not just the United States – was faulty,” he told Kelly.  “And in retrospect, once we invaded and took out Saddam Hussein, we didn’t focus on security first, and the Iraqis in this incredibly insecure environment turned on the United States military because there was no security for themselves and their families.”

But Bush still says he would have invaded ..

“News flash to the world, if they’re trying to find places where there’s big space between me and my brother, this might not be one of those,” he told Kelly.

Wow … talk about an interesting “strategery.”

America’s “War on Terror” – initiated by George W. Bush and pursued by Barack Obama – cost American taxpayers between $4-6 trillion.  It also cost thousands of American lives – yet failed to make our nation safer.

Hence the War on Terror II …

Of course to be fair to Bush, his “if at first you fail, throw more money at it” approach to warmongering fits the broader “Republican” view of government championed by his brother.

Meaning he’s nothing if not consistent …

George Pataki Gets It Wrong On ISIS