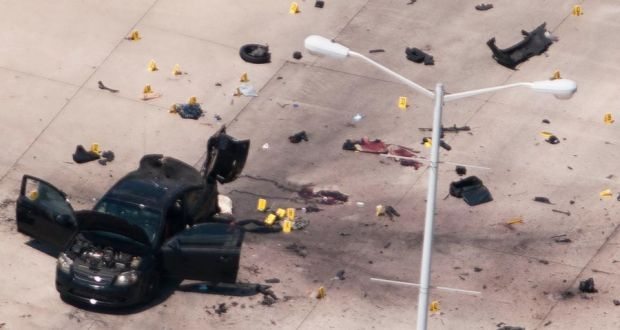 || By FITSNEWS || The Islamic State in Iraq and Syria (ISIS) – America’s newest enemy in a perpetual “War on Terror” – has claimed responsibility for its first terrorist attack on U.S. soil.

The question is … “why?”  The attack was a total bust … and there’s zero evidence ISIS had anything to do with it.  Or even knew about it.

Simpson and Soofi were no doubt hoping to reprise the bloody attack on the satirical publication Charlie Hebdo in Paris four months ago … in which twelve people were slaughtered.

Upon arriving at the facility, Simpson and Soofi began firing at a security guard – wounding him in the ankle.  Garland police responded by opening fire on the two shooters – killing them both.

Astoundingly, ISIS believes this is a result to trumpet …

“This fair was conducting a competition of offensive cartoons of the Prophet Muhammad,” a statement from the organization reads. “The brothers were killed during an exchange of fire, and we ask God to welcome them into heaven.  And we say to America … that what is coming is worse and more bitter, and you will see from the soldiers of the Islamic State what ill will come.”

“The Islamic State soldiers will inflict harm on you with the grace of God,” the group added. “The future is just around the corner.”

The future is just around the corner?

We’re not saying America shouldn’t be vigilant as it relates to credible threats against the homeland.  It absolutely should.  In fact that’s one of the handful of core functions the federal government ought to perform.  But this botched attack isn’t evidence of ISIS at work in America – it’s evidence of opportunism on the part of the shooters and the organization.

Of course the more America meddles where it doesn’t belong – using money it doesn’t have – the more likely our country is to experience real terrorist attacks.