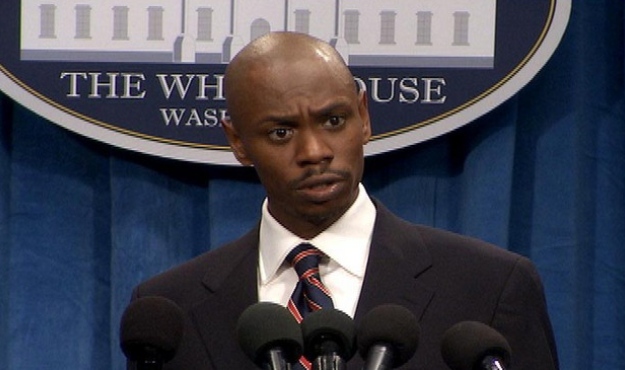 Back in the early 2004, comedian Dave Chappelle produced a masterpiece entitled “Black Bush” – a comedic mockumentary of the events leading up to (and immediately following) the United States’ “second crusade” in Iraq, led by former president George W. Bush.

We’ve written about this sketch before, but in case you’ve never seen it for yourself CLICK HERE.

You won’t regret it …

Anyway, now that Amerika’s “third crusade” in Iraq is ramping up, we thought it was worth revisiting the “Black Bush” sketch – especially the reference it makes to the region being “ripe for regime change.”

That’s exactly what U.S. Sen. Dianne Feinstein (D-California) said this week in reference to the administration of Iraqi prime minister Nouri Kamal al-Maliki – a U.S.-supported puppet who was hand-picked by the CIA to lead the country due to his opposition to Iran.

Now they’re our allies or something … sort of like al-Qaeda (who we were supporting in Syria) is now our enemy in Iraq.

Ah yes, the fickle American war gods. They’re like dementia sufferers … except with a limitless expense account and absolutely no accountability.

Anyway, back to the “ripe for regime change” theme …

“The Maliki government, candidly, has got to go if you want any reconciliation,” Feinstein said of the situation in Iraq.

“There’s no question that not enough has been done by the government, including the prime minister, to govern inclusively, and that that has contributed to the situation and the crisis that we have today in Iraq,” Carney said.

Not to be outdone, U.S. Secretary of State John Kerry added that “if there is a clear successor, if the results of the election are respected, if people come together with the cohesiveness necessary to build a legitimate government that puts the reforms in place that people want, that might wind up being very salutatory.”

There’s a simple message here: Be Amerika’s puppet, or else.

Amerika’s foreign policy meddling and military interventionism in Iraq (and the rest of the Middle East) has been a colossal, categorical and costly failure.  How much money has gone down the drain?  An estimated $4-6 trillion in Iraq and Afghanistan alone when it’s all said and done, according to a recent Harvard study.

And let’s not forget the thousands of body bags sent home over the course of the last decade-and-a-half … or the tens of thousands permanently disfigured or suffering from post-traumatic stress disorder.

So that Lindsey Graham and politicians like him can campaign saying they “have the military’s back?”

“More like a knife in the back,” says Thomas Ravenel, a likely independent U.S. Senate candidate from South Carolina who has been especially critical of Amerika’s failed military interventionism.

I’m going to do a White Obama…where he snatches DEFEAT from the Jaws of Victory, and freedom, and squanders a VERY VALUABLE Strategic advantage in Iraq…just so Dumb@$$ liberals and Liberal-Tarins have something to blame Bush for.

Understand: The 45,000 soldiers who gave their lives for freedom, and to purge a terrorist incubator, look at you like the piece of $#*! you, John Kerry, and Sanford are…

Being against WAR is easy. No one likes it (especially after they vote for it – see Reid, Kerry and Clinton) …but to exploit it, because you are a F*#k up, and you are ignorant (see FITS) makes you a Coward. .

It was worse than we thought…..

We all saw you change it, Douchey Douchington.

Understand: The 45,000 soldiers who gave their lives for freedom, and to
purge a terrorist incubator, look at you like the piece of $#*! you,
John Kerry, and Sanford are…

I have it screenshotted too. Want me to post that to imgur?

Tampering with evidence. I hear the Obama IRS is looking for crooks…errr…people just like you…LMAO…

Don’t you have your on fucking blog? Then, why bother us? Oh, that’s right, no fun to be had there…

You are really, really full of shit bro.

Completely without even the most elemental sense of self-respect.

He accused my copy/paste and screenshot of being “tampered with.” I guess we’re all conspiring against him now.

Everybody makes typos, just man up, change it and note it. No embarrassment there, but there is dishonesty in trying to slide a change past people thinking they won’t know better. Shame on you.

Shame? GrandTango? That Venn diagram does not overlap.

Do you actually think that any sane person would take YOUR word over TBG OR Smirks?

Please take Nikki with you and don’t come back.

There is 1 country in the world who ever used WMD, twice !! Any clue ?

If I have to be Amerika’s puppet, my demands are this:

1. The hand shoved up my ass, moving my lips, MUST be coated with some type of benign lubricant.
2. I would appreciate if said hand has $100 dollar bills stuffed into it, so when I need money I can simply put my finger in my throat and puke some up.
3. I would also appreciate if the hand would make a cursory attempt to match my moving lips with the words coming out of the US governments mouth so I don’t look as stupid to the rest of the world.

So while I may have no choice about having the US govt’s hand up my ass, I do have my standards when it comes to how they put it in there….unless of course they tell me I don’t.

That Blog is REALLY P!$$*ng you off. Gettin’ in your head ain’t it. Liberals not used to anybody thinking against Obama, are you?….

You’ve been scared before, but NOTHING like this. Wipe that S#!* off, that’s running down your leg. Hahahahaha…

“a country he recently said was planning to bomb Charleston harbor in the event the United States didn’t invade Syria.”

Hyperbole much? He didn’t say that and you know it.

That’s OK, because today on WORD, Russ Cassell said that the Iraq War was a good idea because we got rid of Hussein and his two sons. In other words, trillions of dollars in current and future costs, 4500+ American lives was worth it. Now pardon me while MY FUCKING HEAD EXPLODES!!!

Cassell and his cohort McLain, are both idiots

lol…Glenn Beck admitted that “liberals were right” on Iraq(which is ironic because many of them voted for Iraq as well, only the almost universally hated Ron Paul was telling everyone it was a mistake) and that we need to pull up stakes….so Russ Cassell is an idiot of the caliber beyond Glenn Beck and it takes a very special person to perform at that level.

Liberals were screaming for Bush 41 to go into Baghdad. Liberals are such hypocrites. To his credit, he stayed within the UN Resolutions to liberate Kuwait.

After 8 years of idiotic policies and vacillating from the Clinton WH, things fell apart culminating in the USS Cole attack.

Bush 43 screwed up as well. The Iraq War was poorly executed by Cheney and Rumsfeld.

Obama co-opted many from Clinton’s team to utter disaster.

If Governor’s like Sebelius and Haley and Huckabee and US Senators like Kerry and Hagel are the talent pool to run Departments in the Cabinet, we are all screwed regardless who is President.

The vote was based on false information, get the story right.

So what? Ron Paul was able to see it for what it was, the UN was screaming that there was no proof, it was a pretext for war…obvious to many.

Was Glenn crying when he said that? Did it “change his life” as well?

I rarely make decisions, but when I do, I change them!!!

G.W. Bush should be exiled to Skankonia.