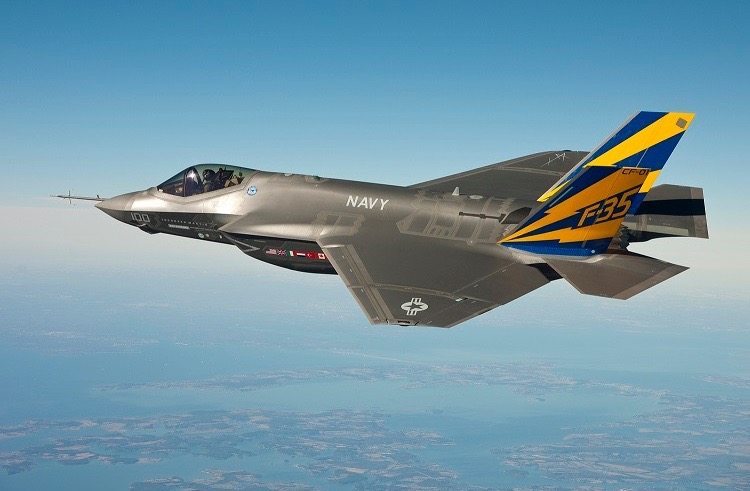 LET’S DO A STATUS CHECK ON THE F-35 PROGRAM, SHALL WE?

|| By FITSNEWS ||  Warmongers in Washington, D.C. are demanding billions of additional dollars be routed to the U.S. military in current and future budgets … even as their next generation fighter jet continues to be the poster project for Pentagon waste and incompetence.

The Lockheed Martin F-35 fighter – a plane which is years late, billions of dollars over-budget and of dubious combat effectiveness – is dealing with perhaps its most serious problem yet.

Two new reports – one from the Government Accountability Office (GAO) and another from the Department of Defense’s Inspector General – highlight “systemic nonconformities” with the plane’s Pratt and Whitney engines.

The U.S. House has launched an investigation into the plane’s engine issues – which surfaced as the Pentagon officials requested billions of dollars in new funding for the chronically mismanaged program.

The latest cost estimates?  According to the military, the F-35 program will cost taxpayers between $850 billion and $1.1 trillion.  Although independent experts say the true cost is much higher – upwards of $1.5 trillion.

“The F-35 Joint Strike Fighter is the most expensive, and possible the most error ridden, project in the history of the United States military,” David Francis of The Fiscal Times wrote last year.  “But DOD has sunk so much money into the F-35 – which is expected to cost $1.5 trillion over the 55-year life of the program – that the Pentagon deemed it ‘too big to fail’ in 2010.”

The F-35 has been a debacle from the beginning.  In addition to its recently revealed engine issues, the plane’s software is screwed up, its flight control and helmet display functions don’t work, its fuel tank needs to be redesigned, it is vulnerable to lightning strikes and it won’t be able to carry its most advanced weapons until 2022 at the earliest.

No wonder military analysts have found the F-35 to be woefully deficient going head-to-head against the newest Chinese fighters.

“The F-35 is double inferior,” the analysts concluded after their tests, saying the plane “can’t turn, can’t climb, can’t run.”

U.S. Senator Lindsey Graham has been a consistent supporter of the program – despite its serious cost overruns.

Last fall, Graham praised the F-35 program again – singling it out as one of the reasons he opposed so-called defense spending “cuts.”

“When we deploy our military, I want it to be overwhelming, I want it to be decisive, and end it as soon as possible,” Graham said.  “I don’t want to have anybody on the other side having the same capability as we do.  And to keep distance from the enemy means you have to innovate.”

Maybe Graham is so keen on the F-35 because he believes it will be an essential weapon in the war against Iran that he’s so desperate to launch.

For those of you keeping score at home there’s no way this ends well … for your wallet, your liberty or your future safety.

Trey Gowdy needs to investigate this.

I think that she has agreed to testify publicly but Gowdy wants it in private. So much for government transparency.

He’s got open invitations for both: http://www.politico.com/story/2015/04/hillary-clinton-benghazi-email-hearings-117286.html

“…The House Committee investigating Benghazi is asking Hillary Clinton to appear for two public hearings on the 2012 terrorist attacks and her email use, according to a letter sent to her lawyer on Thursday.

This is a departure from what Benghazi Committee Chairman Trey Gowdy originally requested from the former secretary of state. The South Carolina Republican wanted a private, transcribed interview on Clinton’s email use and a public hearing on the terrorist attacks.

But Clinton had refused to appear in private to take questions on her use of a private email address while at the State Department. Her lawyer, David Kendall, had insisted that Clinton was prepared to take questions about her emails, the server that stored them and the Benghazi attacks during a single, public hearing.

The reason she won’t do the private interview is that it will be sworn and transcribed as well as able to delve into classified materials – where she is extremely vulnerable.

That and it’s easier to play the victim of mean Ed Grimley spike hair if it’s in public. She’ll get her way – they have the best lawyers.

Iiiiii don’t know, Howdy Gowdy (google Howdy Doody, the hair style similarities are striking) can be a handful when he gets his back up, even in public.

I thought his style was more like Cobblepot on the Gotham series. At least the one on this website. Was on the .gov site but has been changed as has his hair style.

Trey Gowdy “investigating” anything is the joke.

He’s simply a frontman carrying out his orders.

Will, for once, you’ve got a military issue right. The F-35 is a boondoggle and needs to be canceled.

Hating based on his ignorance…is NEVER right….
No credit given….

THat makes no sense. Please – sit down and shut up.

“flagged as YOU are a MORON”

Correct, as usual. One could build ten+ A-10’s for the price of one F-35. Even more if the air refueling tanker support fleet were just remodeled instead of scrapped and replaced with new.

Key word that kills that idea – cheaply. The procurement office has never been about cheaply unless its boots and t-shirts. When it comes to anything with wings, tracks or high-technology – the sky is the limit.

You know, I finally got what I consider to be a good pair of boots from the Army two years ago. Every other pair I’ve been issued up to this point was crap. I asked the civilian running the issue point in Bagram about the boots – she said they were commercial off the shelf “interim issue”….

… and has been the case since the Civil War.

What the Hell is “iterim issue” – geesh.

Stuff they gave us because it was immediately available and worked and that they could issue until they had time to get government procurement involved to completely screw them up?

… all too often, all too true.

True. But if we are going to send someone to be judge, jury and executioner, he should be on the scene. (My opinion: Remote controlled Death From Above can devolve into little more than a parlor/video game. Just because Obama does it does not make it right or just.)

We’ve been heading that way since 1988. The difference between a Tomahawk and a drone, the drone doesn’t need to crash itself into the target to deliver a payload.

Yeah, reusable… Just like the reset button on your game boy.

The air frames you mention only have so much structural life in them.

B-52s are up to at least model G now. Submarine hulls also have only a finite number of dives in them. Nuclear reactors have concerns with neutron bombardment over time. Nothing material lasts forever.

No argument that nothing lasts forever, however all of the aircraft I mentioned are decades younger than the BUFF. Extending their lives allows for the development of truly revolutionary weapons of war rather than the not so effective F-35.

An excellent comparison of the F-15 Strike Eagle and the F-35. The author explains why the F-35 isn’t nearly as revolutionary as it might seem. http://randomthoughtsandguns.blogspot.com/2013/09/f-35-vs-f-15se.html

Uh, that would be triple inferior.

Next generation is going to have to be full on unmanned. You can’t compete with a plane that isn’t limited by pilot g-force limits and airframe limitations aren’t structural anymore, but on board pilot related.(at least in air to air close combat)

War via Nintendo is becoming the norm, nay, required.

Pimple faced kids at the height of their reaction times controlling high performance drones seem to be the way in the short term future.

Maybe even one day land based terminators until Skynet can do the chore.

Ready the Mountain Dew & Cheetos for the future of combat.

What a stupid, fucking comment.You prove once again you are clueless.

I’m really sorry I boned your mom. Please forgive me.

News flash for Folks. Pratt and Whitney is not a government-run company. Its free market.

If we ever get into a shooting war with either the Chinese or the Russians no number of super jets on either side are going to save any of us. But, build away! That provides jobs and boosts the economy…for now.

Airforce picked the locheed f35 they liked the way it looked, looked like a cool fighter a/c. The Boeing JSF was a tad on the ugly side Signed tax payer now stuck paying for a cool looking fighter.