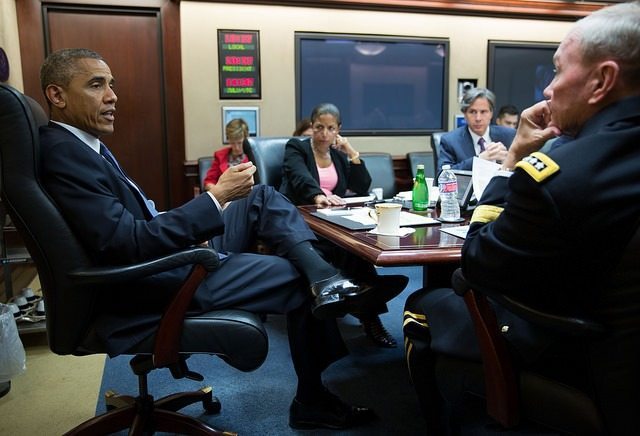 The artillery sites – reportedly operated by the Islamic State of Iraq and Syria (ISIS) – were targeted one day after U.S. president Barack Obama authorized the use of military force in Iraq.

Obama – who did not receive congressional approval for the airstrikes – has previously referred to America’s eight-year engagement in Iraq as a “dumb war” and the “wrong war.”  In fact he campaigned for president in 2008 on removing American forces from Iraq, a goal which was accomplished in December 2011.

Since then, Iraq has descended into chaos – which Obama believes he must correct with military action.

“Today, America is coming to help,” he said in authorizing the airstrikes.

What about the millions of Americans  who need help as a result of his evisceration of the middle class?  Oh right … they’re the ones Obama will stick with the bill for these airstrikes.

Look, we fully understand that terrible things are going on in Iraq between Sunni and Shiite Muslims (thanks to Western-drawn borders).  We’ve all heard the horror stories about tens of thousands of refugees trapped on Mount Sinjar with no food or water.  And about the ISIS soldiers lurking at the base of the mountain waiting to kill them.

We get it: It’s terrible.  But it’s also not our problem .

More to the point: What evidence is there to suggest our intervention is going to do anything to help?

These people are going to kill each other, pure and simple.  Same thing in the Israeli-Gaza fight.  There’s nothing we can do to stop it.  In fact the more we meddle in their affairs, the more they want to kill us , too.

The U.S. government utterly and completely fabricated the basis for its 2003 invasion of Iraq – a conflict that cost thousands of American lives and trillions of our tax dollars.  Now faced with the abject failure of this intervention – notably the emergence of an al-Qaeda-led rebellion against the U.S.-backed “democratic” government in Baghdad – our politicians want to tell us “something must be done” in the country.

And of course Obama is vowing that “no combat troops” will be sent to Iraq – a promise we’ve all heard before.

“I will not allow the United States to be dragged into fighting another war in Iraq, so even as we support Iraqis as they take the fight to these terrorists American combat troops will not be returning to fight in Iraq,” Obama vowed.

If that’s the case, why get involved at all?  Especially seeing how American tax money being used to bomb ISIS in one country and support it in another?

Here’s the bottom line: No matter how bad things are in Iraq, the situation on the ground there is proof positive that American intervention does not help .

America “Opened The Gates Of Hell” In Iraq