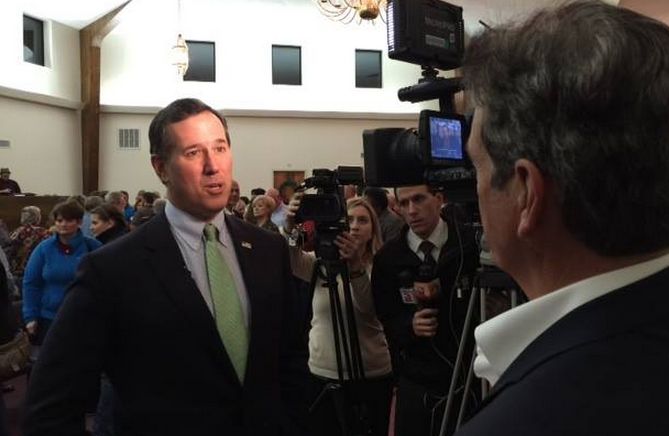 || By FITSNEWS ||  Rick Santorum has found the sweet spot … or so he thinks.

The fiscally liberal “Republican” – drummed out of the U.S. Senate over a decade ago by Pennsylvania voters – rose to prominence during the 2012 election cycle by shamelessly pandering to the GOP’s dwindling sanctimonious social conservative electorate.

It was worth four million votes … and first-place finishes in eleven states (including early-voting Iowa).  But Santorum got nowhere near the GOP nomination.  And with better-known evangelical candidate Mike Huckabee mulling a 2016 bid of his own (threatening to eat into Santorum’s base of 2012 support), the sweater vest-wearer has been forced to stake out new ground on the campaign trail.

What’s he come up with?  A new militant brand of social conservatism – a fusion candidacy which incorporates the bigotry he’s known and loved (loathed) for with the sort of rabid global military interventionism typically reserved for the likes of U.S. Senator John McCain and Lindsey Graham.

During a recent speech at The Citadel – early-voting South Carolina’s famous military college – Santorum fleshed out the details of his militant Christianity.

Santorum said point blank America needs to stop negotiating with Iran – adding if the Islamic nation continued down the path toward nuclear capability then the United States needed to stop them.  And not just with sanctions, with war if necessary.

Santorum also stated his support for providing money and weapons to the current Egyptian and Jordanian governments, as well as the Peshmerga Kurds in Iraq.

“Stop giving them bandaids for their wounded and caskets for their dead,” Santorum said.

Never mind that the Peshmerga Kurds in Syria are viewed by the U.S. government as “terrorists,” or that arming them is likely to infuriate Turkey – where several U.S. military bases are located.

One of the problems of being everywhere … constantly fighting all sides of various conflicts.

According to Santorum, the war against the Islamic State in Iraq and Syria (ISIS) is a war not against a specific terrorist organization but a religious war – and to him, the only way to deal with radical jihadists is to kill them.

In fact Santorum went to great pains to make clear that this was a religious war and should be treated and labeled as such.  He also talked about the “enemy from within” and Muslims in this country, but did not specify how he would handle the threat.

“What concerned me with Santorum’s speech was the tangling of his personal religious beliefs with the military might of the United States,” one soldier who listened to Santorum told FITS.  “Although not stated openly, the rhetoric sounded like a modern day crusade.  He said every Islamic extremist group is the same, the only difference is the level of violence they are willing to tolerate.  That Islam is not a religion of peace and never has, they want a caliphate and are doing what Mohammad did in 622 AD.”

Seriously … American intervention in the Middle East has been a disaster.  One that’s cost our country trillions of dollars and thousands of lives … and accomplished nothing.  Well, nothing aside from the creation of a new enemy that’s supposedly more dangerous and more motivated to do America harm than the last enemy we were fighting.

How is that keeping us safe?

Sadly, the battle for the hearts and minds of Americans appears to have been won by the warmongers – which means the military money presses are once again warming up.