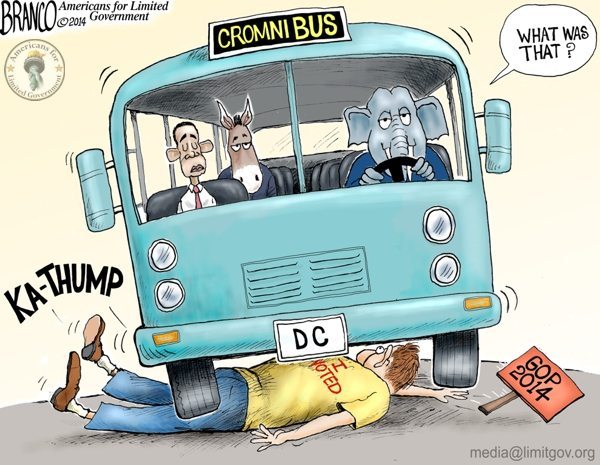 RED OR BLUE: WHOEVER’S DRIVING, A CRASH IS INEVITABLE

By FITSNEWS  ||  There’s been a lot of talk about how the first thing “Republicans” did following their big election win was sell taxpayers down the river via the passage of a pork-laden “bipartisan” spending bill (a.k.a. the “Cromnibus”).

Which is true … that’s exactly what they did.

And yes,  a trillion here … a trillion there … sooner or later we’re talking about real money.

“This year’s omnibus resembles omnibuses of Christmas past in that it was drafted in secret, was full of special interest deals and disguised spending increases, and was voted on before most members could read it,” former U.S. Rep. Ron Paul wrote of the boondoggle.

Absolutely.  In other words it’s more of the same “bipartisanshit” that has American taxpayers (and the economy they are attempting to support) drowning in red ink.

Beyond the budget deal, there’s also a growing awareness that Washington’s deficit spending addiction has now reached a “point of no return.”

Which also happens to be true …

Putting all of this in context?  A brilliant political cartoon by A.F. Blanco, whose “Cromnibus” depiction – published by Americans for Limited Government – hits the nail on the head.

Is Kela Thomas’ Head The Next To Roll?

I don’t know of too many enterprises that do not work without bipartisanship. Companies engage in collaboration and cooperation all day long with people they either like or need to like, for the sake of their owners and shareholders. It’s how they make money, and live the American Dream.
There is a great article by Thomas Edsall in the NYTimes this morning about the rise of welfare chauvinism. It talks about having a voice in a democracy, and suggests why having more than 2 political parties may be the way to go. Food for thought.

“I don’t know of too many enterprises that do not work without bipartisanship.”

#1 The goal of a company is very simple, make money. There is no “bipartisanship” to start because the goal is common. Hence, any bickering is relegated to personality differences, arguments over profitibility, etc.

That is all, carry on.

If gov’t isn’t a business, then why are the Republicans always touting the private sector business experience of their nominees and trying to discredit those that don’t?

Probably because the inference is that business requires performance competency and gov’t does not.

My government experience has allowed me to go into private practice and make a comfortable living. Not everyone in government is doing a bad job. The problem with government is that it condones mean, vicious supervisors, and sloppy, arrogant mediocre people. The people need the service or perhaps they don’t but so many people in government are there for the ease and the pension. Which is a shame. Look at the VA. It takes forever to get disability claims approved. I am going on my 4th month waiting for a fee I won. Everyone is out having a baby on FMLA I guess.

There is no “bipartisanship” to start because the goal is common.

The goal may be the same, but there’s more than one way to get to that goal. Departments/projects competing for limited resources, execs bickering over random shit, etc., lots of opportunity for compromise.

“Bottom line…we’re screwed.”? Does the fear mongering ever stop here? The fact is the country has done best in the past 25 years when a Democrat has been President. The republicans threw all the fear out there they could in an attempt to rally their base. Now that the election is over, their electorate is still going around frightened as hell, while the rest of the country looks forward and moves on.

Does the fear mongering ever stop here?

Only when it’s politically convenient for it to.

The problem is, how many of the “no” votes voted “no” because it was going to pass comfortably anyways?

DOn’t forget how the parties are secretly working together over the Christmas break to craft an amnesty bill to pass in February.

Oh yes they will. Jeb will see to it.

I agree with you. Why didn’t they include a couple of homosexuals on the bus?
Sexy hispanic men? xoxoxoxoxo

I like the cartoon. I would just relabel the person under the bus with the names Sandi, Pogo2, Grand Tango and Guest. And put an illegal alien in one of the bus seats.

Yeah, he should use Flop Costco – it would be better and more fitting. Or Wally Wal-Mart.

The cartoon? Shouldn’t O’B & the donkey be sitting further back?