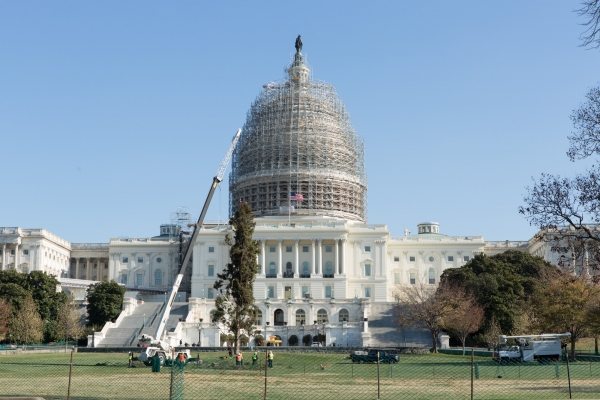 THE REALITY BEHIND D.C. “BRINKSMANSHIP“

By RON PAUL  ||  The political class breathed a sigh of relief Saturday when the U.S. Senate averted a government shutdown by passing the $1.1 trillion omnibus spending bill.  This year’s omnibus resembles omnibuses of Christmas past in that it was drafted in secret, was full of special interest deals and disguised spending increases, and was voted on before most members could read it.

The debate over the omnibus may have made for entertaining political theater, but the outcome was never in doubt.  Most House and Senate members are so terrified of another government shutdown that they would rather vote for a 1,774-page bill they have not read than risk even a one or two-day government shutdown.

The political class’ shutdown phobia is particularly puzzling because a shutdown only closes 20 percent of the federal government.  As the American people learned during the government shutdown of 2013, the country can survive with 20 percent less government.

Instead of panicking over a limited shutdown, a true pro-liberty Congress would be eagerly drawing up plans to permanently close most of the federal government, staring with the Federal Reserve.  The Federal Reserve’s inflationary policies not only degrade the average American’s standard of living, they also allow Congress to run up huge deficits.  Congress should take the first step toward restoring a sound monetary policy by passing the “Audit the Fed” bill, so the American people can finally learn the truth about the Fed’s operations.

Second on the chopping block should be the Internal Revenue Service.  The federal government is perfectly capable of performing its constitutional functions without imposing a tyrannical income tax system on the American people.

America’s militaristic foreign policy should certainly be high on the shutdown list.  The troops should be brought home, all foreign aid should be ended, and America should pursue a policy of peace and free trade with all nations.  Ending the foreign policy of hyper-interventionism that causes so many to resent and even hate America will increase our national security.

All programs that spy on or otherwise interfere with the private lives of American citizens should be shutdown.  This means no more TSA, NSA, or CIA, as well as an end to all federal programs that promote police militarization.  The unconstitutional war on drugs should also end, along with the war on raw milk.

All forms of welfare should be shut down, starting with those welfare programs that benefit the wealthy and the politically well connected.  Corporate welfare, including welfare for the military-industrial complex that masquerades as “defense spending,” should be first on the chopping block.  Welfare for those with lower incomes could be more slowly phased out to protect those who have become dependent on those programs.

The Department of Education should be permanently padlocked.  This would free American schoolchildren from the dumbed-down education imposed by Common Core and No Child Left Behind.  Of course, Obamacare, and similar programs, must be shut down so we can finally have free-market health care.

Congress could not have picked a worse Christmas gift for the American people than the 1,774-page omnibus spending bill.  Unfortunately, we cannot return this gift.  But hopefully someday Congress will give us the gift of peace, prosperity, and liberty by shutting down the welfare-warfare state.

Beyond $18 Trillion: What The Debt Means For Your Bottom Line