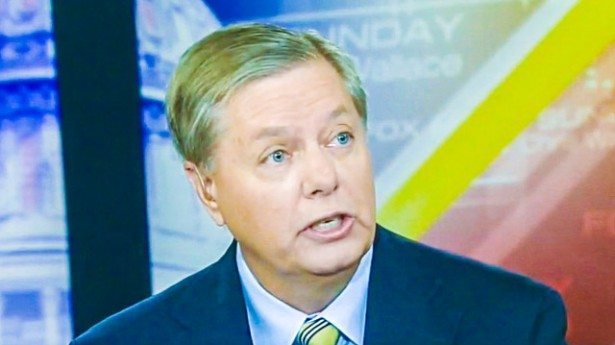 U.S. Sen. Lindsey Graham is still refusing to appear at a series of town hall debates in his home state, but God forbid you stand between him and one of the “Inside the Beltway” talk shows in Washington, D.C.

Graham may not have time for South Carolina, but apparently he’s still got plenty of time to shill for defense contractors via the establishment media …

To wit: Graham appeared on Fox News Sunday  this week, ratcheting up his best fearmongering yet as it relates to the ongoing American military intervention in Iraq against the Islamic State of Iraq and Syria (ISIS).

“I think of an American city in flames because of the terrorists’ ability to operate in Syria and Iraq,” Graham said.

Wait … in Syria?  Isn’t that where Graham and his fellow whore for the military-industrial complex, John McCain, have been supporting radical jihadists linked to ISIS?  Why yes … yes it is.

In fact Graham said America had to help those  jihadists because if we didn’t, Iran would nuke the Port of Charleston.  And Iran, of course, is the country Graham recently said we should ally with in order to stop the spread of the radical jihadists in Iraq.

Does any of that make even one iota of sense?

Of course not.  Nor does the fact that America’s bomber-in-chief – currently enjoying a two-week vacation in Martha’s Vineyard – still hasn’t requested or received permission from the U.S. Congress for his latest military action.

“Iraq and Syria combined represent a direct threat to our homeland,” Graham said on Fox News Sunday .  “His responsibility as president is to defend this nation. If he does not go on the offensive against ISIS, ISIL — whatever you want to call these guys — they are coming here!”

Heard that line before?  It’s the exact same rhetoric used by McCain when he ran for president in 2008 against Obama – who frequently belittled the 2003-11 Iraq War as a “dumb war” and the “wrong war.”  Come to think of it, “if we don’t go there, they’ll come here” is the tired old logic of most of these “neoconservative” warmongers … who neglect to point out that “they” keep coming here precisely because we won’t stop going over there .  Usually going on the thinnest of pretenses – and in a manner that winds up killing thousands of innocent people.

Actually, Senator, the “blunder for the ages” is ongoing – it is the dumping of trillions of dollars and thousands of American lives into conflicts in which we have no business intervening.  All to fatten the pockets of the military contractors Graham so slavishly serves.

Which brings us to the bottom line: If an American city does  wind up in flames, it will be precisely because we couldn’t stop meddling in the Middle East.  Not because we refused to follow Graham’s advice of bombing and invading everybody under the desert sun.

America “Opened The Gates Of Hell” In Iraq