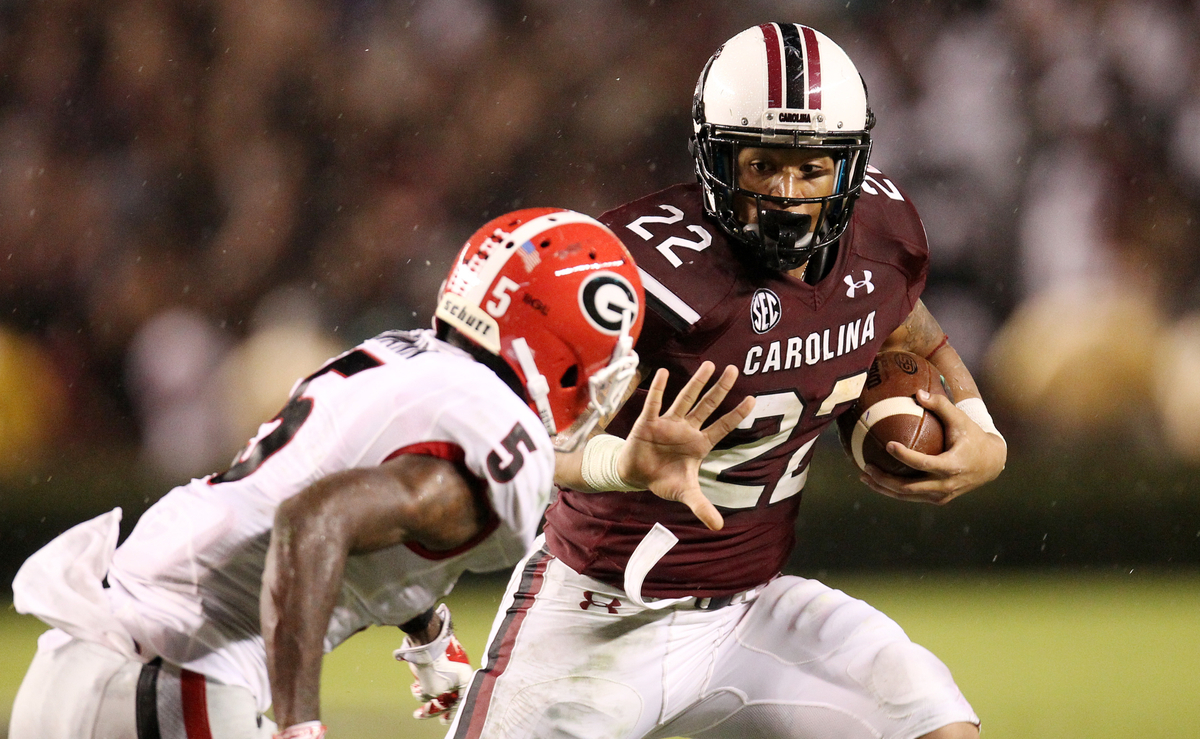 They got three-and-a-half … a whisker-thin margin that delivered Steve Spurrier‘s team a potentially season-saving victory over the No. 6 team in the nation and their top rival in the SEC Eastern Division.

A fourth down quarterback sneak by fifth-year senior Dylan Thompson with less than a minute-and-a-half to go in the fourth quarter picked up a critical – and controversial – first down, icing a 38-35 Gamecock win over the sixth-ranked Bulldogs.

No. 24 South Carolina (2-1, 1-1 SEC) has now won four out of the last five against Georgia (1-1, 0-1 SEC). The victory also gave Spurrier his 201st win as an SEC coach – tying him for second all-time with former Georgia head coach Vince Dooley.

The spot of the ball following Thompson’s sneak was challenged by Georgia head coach Mark Richt – but to no avail.  No replays were conclusive to overturn the call, which spotted the tip of the football right at the last link of the first down chain.

Thompson had a huge game in his first career start against the Bulldogs – completing 21 of 30 passes for 273 yards with three touchdowns and one interception.

That pick nearly cost South Carolina the game, though, setting Georgia up with a first-and-goal at the Gamecock four-yard-line trailing 38-35 with just over five minutes on the clock.  Inexplicably, the Bulldogs did not hand the ball to Heisman Trophy frontrunner Todd Gurley in that situation – instead calling a quarterback rollout that resulted in an intentional grounding penalty against Georgia quarterback Hutson Mason.

Expect to hear that play call pilloried in Athens, Georgia in the weeks to come … 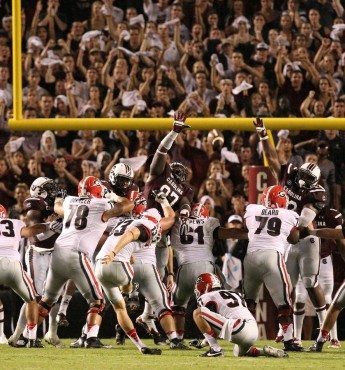 The game – delayed for more than an hour-and-a-half by inclement weather – more than lived up to the hype.  Gurley had another huge game – 131 yards on 20 carries – although his biggest play, a 54-yard touchdown scamper in the first half, was called back by a holding penalty.

South Carolina’s top two running backs – juniors Brandon Wilds and Mike Davis – had 93 and 66 yards, respectively, with Wilds providing the margin of victory on a 24-yard touchdown scamper with thirteen minutes left in the game.

That was one of several plays in which South Carolina’s offensive line provided textbook blocking up front.

The much-maligned Gamecock defense continued to struggle against Georgia – giving up 35 points and 408 yards to the Bulldog offense.  But they defended the best running back in the country about as well as could be expected.  South Carolina did benefit from the Bulldogs missing three of their top wide receivers – Malcolm Mitchell, Jonathon Rumph and Justin Scott-Wesley – due to injury.

In addition to its big win over Georgia, South Carolina’s Week 2 opponent – East Carolina – scored its own big win on Saturday, a 28-21 victory on the road over No. 17 Virginia Tech.

Both outcomes should serve to help the Gamecocks in the polls.