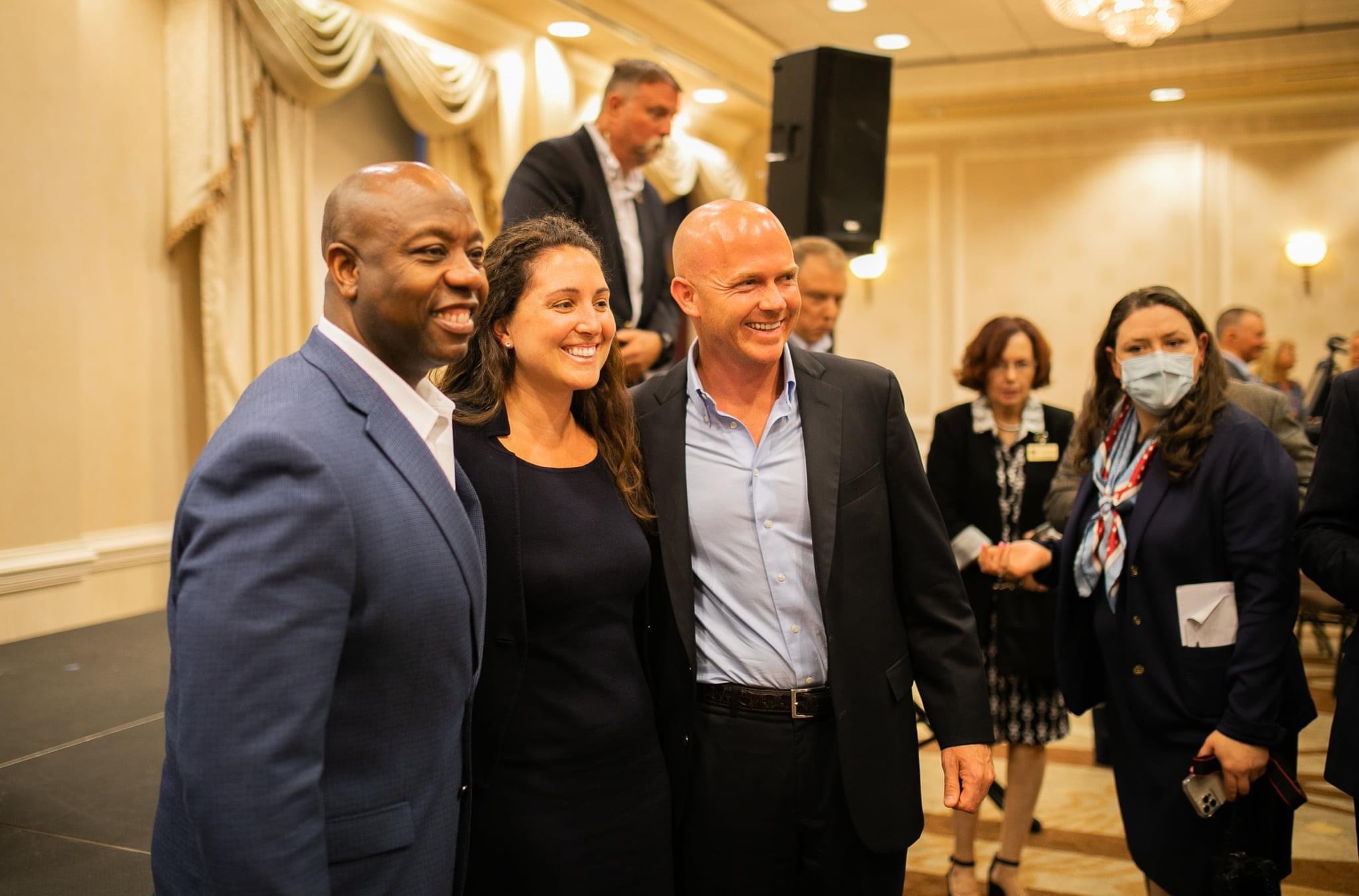 Sarah Timmons – the estranged wife of philandering “conservative” U.S. congressman William Timmons – has filed for separation from her husband.

Documents to that effect were submitted at approximately 9:51 a.m. EST on Friday (November 18, 2022) in family court in Greenville County, South Carolina – part of a district William Timmons has represented in Washington, D.C. since January 2019.

“Good for her,” a friend of the couple told me upon hearing the news.

Sarah Timmons’ filing starts the clock on a one-year separation period during which she and Timmons must live apart prior to being able to seek a divorce – part of the Palmetto State’s controversial family court laws, which place an emphasis on marital reconciliation. However, if theirs is a “fault-based” divorce – i.e. if there is independent evidence of adultery, abuse, drunkenness or abandonment by one of the parties – the separation period is reduced to ninety days.


The couple announced their separation in a statement provided to reporter Devyani Chhetri of The Greenville News.

“It is with both love and mutual respect for one another that we have ultimately made the difficult decision to end our marriage,” the statement noted. “We have always been and will continue to remain close friends. We wish each other happiness as we enter these next seasons of our lives separately. We respectfully ask for privacy as we navigate this process.”

The court documents – in which Sarah Timmons asked the court for “separate support and maintenance” from her husband – were sealed as soon as they were submitted. This news outlet plans on petitioning the court to unseal these files …

Why? Once again, the argument here is simple: Why should wealthy, powerful and politically connected people be allowed to keep their dirty laundry hidden from public view?

The rest of us don’t get the same courtesy …

This is a drum I have been beating for some time, though …

“The sealing of public records for influential individuals is standard operating procedure in South Carolina … yet another example of the preferential treatment received by those in power (or those with proximity to power) in the Palmetto State,” I noted in this 2020 post. “It works like this: When normal people screw up … everybody gets to read about their dirty laundry.  When those with ‘connections’ screw up, the sordid details of their dirty deeds are kept under lock and key … zealously guarded by judges who clearly have no conception of the notion of equal protection under the law.”

Of course, it’s not as though this story has been much of a secret since the 38-year-old congressman – a scion of one of South Carolina’s richest, most influential families – issued a bizarre 18-word statement in the aftermath of an uninspiring win in the GOP primary in June.

Rallis’ antics included a pink paint job given to the now-famous ‘Trap Church’ – a West End property owned by Rallis which served as the location for this exclusive interview he gave us back in July.

The scandal also received a big boost thanks to Timmons’ own indignant response to the drama and some unhinged responses from his family members – some of whom have threatened to cut this prodigal son off from the family fortune.

In October, I reported Timmons, 37, was “planning on initiating divorce proceedings against her estranged husband within the next few weeks.”

“An attorney who spoke on condition of anonymity indicated a reconciliation between the two was ‘not happening,’ and that Sarah Timmons had decided to cut ties with the philandering politician once and for all,” I noted.

The Timmons were married on the Robert J. Dole balcony of the U.S. Capitol on July 17, 2019 – a little more than three years ago. U.S. senator Tim Scott officiated at the ceremony – which was held six months after the businessman/ attorney was sworn in as a member of congress.

This news outlet has previously reported on some questionable financial arrangements between the former couple – including the transfer of a 5.41-acre plot of land which is the site of a massive residential construction project. These arrangements were finalized just weeks before Timmons went public with his “prayers and privacy” statement.

FITSNews has also reported on a $16,000 gift Timmons made to his his mistress in August.

William Timmons’ various extracurricular imbroglios could be on the verge of a significant escalation, having reportedly attracted the attention of the U.S. House ethics committee.

Timmons won the GOP nomination for a third term representing South Carolina’s fourth congressional district in uninspiring fashion back in June – and was unopposed on the ballot this fall. Still, a surprisingly large chunk of the district’s electorate – 9.19 percent – wrote in the name of someone other than Timmons on their ballots.

That means the incumbent is exceedingly vulnerable to a primary challenge in 2024 – in the event he runs again.

Timmons’ family is an institution in the Palmetto Upstate. His great-grandfather – William R. Timmons Sr. – built an empire in and around Greenville beginning in the mid-1920s, focusing on the real estate, trucking and insurance industries. The family – which helped establish and maintain Greenville’s civic and philanthropic communities – is reportedly worth hundreds of millions of dollars.