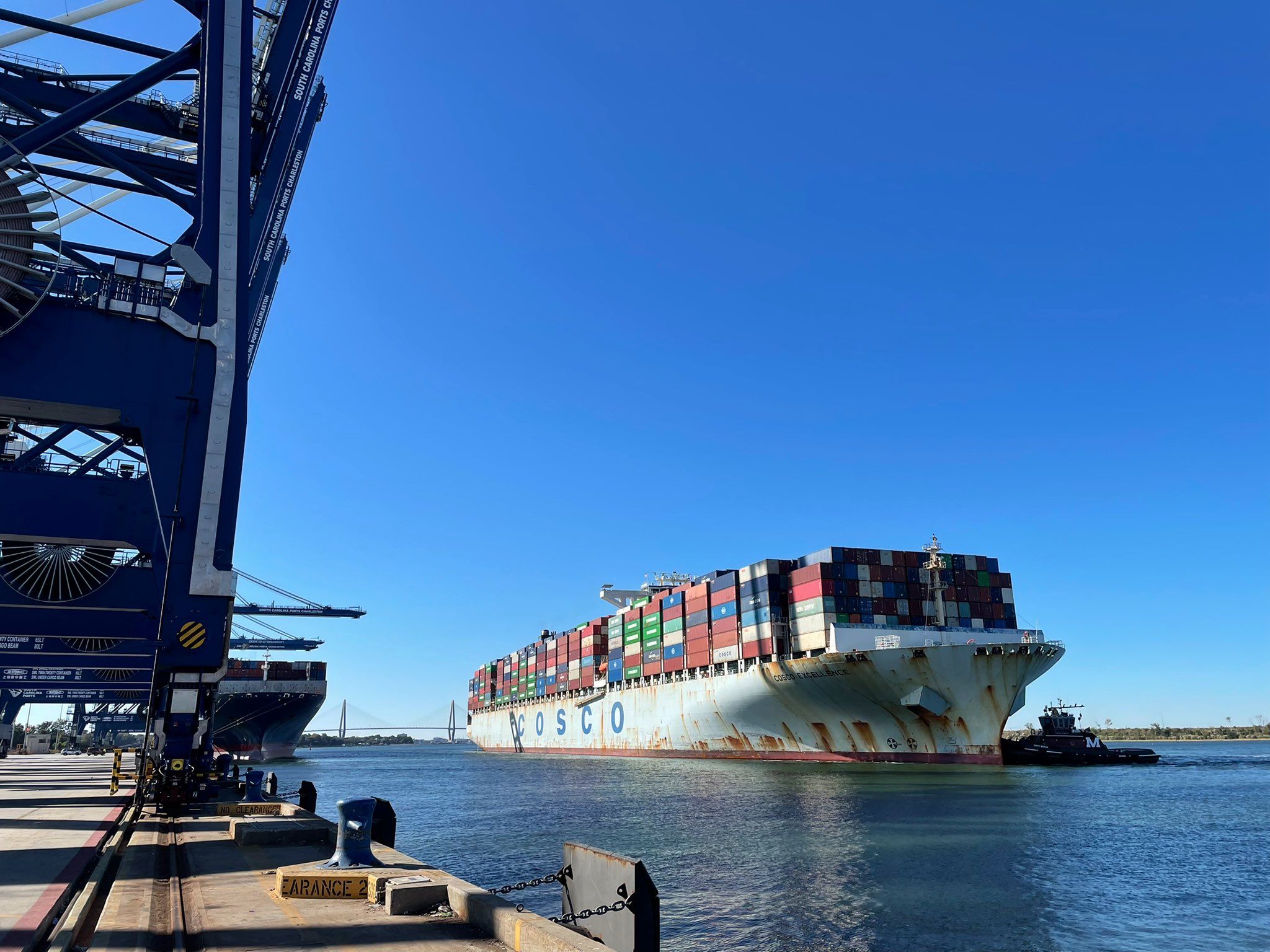 Just before Christmas, I downloaded the Marine Traffic mobile app on my iPhone. The app – which provides real time coordinates for container ships and other sea-faring vessels – came in handy during our brief family vacation to Tybee Island.

Tybee Island is a city/ barrier island located about twenty miles east of Savannah, Georgia. It also overlooks the “Tybee Roads,” which is where the Savannah River estuary meets the Atlantic Ocean.

As the doorway to the bustling port of Savannah, this is one of the busiest maritime arteries in the world – with massive container ships passing through its channels “on the reg,” as the cool kids say.

Anyway, I used the app to let my growing brood of kids know whenever a big boat would be passing by outside – and without fail they would crowd around the windows of the Airbnb where we were staying to catch a glimpse of it.

In fact, here’s a picture of my second-to-youngest (Otto) alerting us to the arrival of one of these massive ships during our stay on Tybee …

Be glad there is no volume on that picture because Otto is loud, people. Very loud.

Upon returning to South Carolina, I’ve been using this app to track the massive shipping logjam off the Palmetto State coast – which I referenced earlier this month in an article about the results-challenged port of Charleston.

I am not the only one, either.

“I was walking the beach here in Hilton Head and noticed four ships (two tankers and two container) anchored off of Savannah this morning,” one of my readers observed earlier this week. “While that isn’t that unusual, I looked at Marinetraffic.com and noticed that there were twenty seven anchored off of Charleston. Twenty-seven!!! The port at Virginia Beach had 22 and the port with the supply chain issue (Long Beach) only had twelve. What the hell is going on that there are that many ships waiting for the port?”

Only four ships were anchored off the coast of Savannah.

According to South Carolina port officials and their mainstream media mouthpieces – a.k.a. reporters at The (Charleston, S.C.) Post and Courier – the problem is “a lack of space in the port’s container yards.”

“We have a shortage of warehouse space, a shortage of container truck and dray capacity and a shortage of chassis (drivers),” SCPA chief executive officer Jim Newsome told his propaganda organ last month. “What are the things that are causing this? Record import volumes and a relatively fixed supply chain that’s not flexible to go up 20 percent in volume.”

As my news outlet has meticulously documented over the years, the port of Charleston has been slow to address regional infrastructure challenges – specifically a lack of road and rail access to port facilities and the overall lack of waterfront space for new port operations in Charleston harbor.

As S.C. senator Tom Davis has frequently pointed out, South Carolina’s politicians and port leaders continue trying to “shoehorn additional capacity” into Charleston – even though it clearly won’t fit.

But this is only part of the story …

Studious users of the Marine Traffic app have noticed something else as they scroll through its maps – namely the lack of ships calling on the S.C. Ports Authority (SCPA)’s gleaming new Hugh K. Leatherman terminal. This costly facility – which opened last year – stood completely empty when I checked the app earlier today. By comparison, there were three container ships moored at SCPA’s Wando Welch terminal and another three moored at its Columbus Street terminal.

Why is there no action at the Leatherman terminal?

According to my sources, the problem is rooted in organized labor issues this news outlet exposed over a year ago when this facility was first opening. As I exclusively reported last January, SCPA was having “trouble with the unions who wield tremendous influence on the waterfront in Charleston harbor.”

Wait, though … isn’t South Carolina a “right-to-work” state? Yes. Very much so.

As its “Republican” politicians love to boast, the Palmetto State has the lowest percentage of unionized workers in America – with only 1.7 percent of its workforce represented by organized labor groups in 2021, according to data (.pdf) from the U.S. Bureau of Labor Statistics (BLS).

The only place unions are thriving in South Carolina? At the SCPA … (well, and in the mainstream media).

Oh, and in the failed government-run education arena …

While union membership in South Carolina cannot be made compulsory, SCPA is one of many state agencies which supplements its taxpayer-funded workforce with union labor.

And yes, that often puts the Palmetto State’s anti-union politicians in difficult positions …


This is the root of the current port strife. According to a waterfront insider who spoke with me this week on condition of anonymity, the International Longshoremen’s Association (ILA) and its Local 1422 want control of all “heavy-lift equipment” on the Leatherman site – including all ship-to-shore cranes and all “RTG” cranes, or “rubber-tryed gantry” cranes.

Currently, the workers operating these heavy-lift devices are non-unionized.

Newsome will not give in to the ILA, believing the port of Charleston would sacrifice efficiency were it to allow the union control over this equipment. Influential lawmakers and South Carolina governor Henry McMaster – who appoints the members of the port’s governing board – are supporting him, too, whipped into an anti-union frenzy by port lobbyists.

Meanwhile, S.C. attorney general Alan Wilson – a longtime political ally of the port – is also in the mix, accusing the ILA, its local branch and the United States Maritime Alliance (USMX) of “pressuring ocean carrier customers not to use the state’s new Hugh Leatherman terminal.”

“The union is expected to follow the rule of law like everyone else,” Wilson said at the time. “South Carolina has long been a staunch right-to-work state and the union cannot undermine our laws guaranteeing the right to work. Those laws do not permit the union to take over jobs from state employees.”

Wilson (above) is onto something … in fact, according to my sources, the limited vessel calls the Leatherman terminal is currently receiving are a direct result of his legal challenges. Without Wilson’s decision to take the ILA to court last January, the terminal would have been completely boycotted.

Still, the Leatherman terminal’s prognosis for long-term competitiveness is not good. Most shipping lines are simply unwilling to risk retaliation from the union at other ports of call on the eastern seaboard.

“ILA has SCPA over a barrel,” the insider I spoke with said. “Their back is up against the wall. They have this new terminal but they can’t use it. They have all these containers but no way to move them inland. ILA is basically saying give us what we want or we will just stage a work slowdown or walkout.”

The insider added “SCPA has known all along” that the Leatherman terminal would create a union standoff.

“They knew this before the first shovel of dirt was turned,” the source said.


Also, the two sides are nowhere near reaching an agreement. In fact, there haven’t even been any formal negotiations between union and port leaders over the Leatherman standoff.

“To my knowledge there have been no discussions between the port and the union,” my waterfront source said.

Newsome is too proud to negotiate with the ILA, multiple sources familiar with the situation tell me.

“He will not give in,” one source said. “And the governor and legislature are going to back him to the hilt. I can tell you for a fact his pride and his ego will not allow him to enter into any agreement with the ILA.”

That dynamic could be changing soon, though …

Earlier this month, SCPA chief operating officer Barbara Melvin – who will replace Newsome as chief executive officer on July 1, 2022 – attended an ILA regional convention in Florida. At this event, she posed for pictures with Charles Brave – president of Local 1422 – and Lenny Bailey, another ILA local leader.

While Melvin’s views on the Leatherman labor dispute are unclear, sources familiar with her thinking say she is more “pragmatic” than Newsome when it comes to negotiating with the ILA.

She may not have a choice, either …

“SCPA has already set a precedent that they will cede jobs to the union,” the insider said, referring to the ILA’s management of gate operations at all SCPA terminals.

What would the harm be in allowing ILA to manage the cranes?

“It works in Savannah, it works in Norfolk … I don’t know why it couldn’t work here,” the insider said.

Still, the political pressure brought to bear against any expansion of the unionized workforce in Charleston will be absolutely blistering. Especially during an election year. Also, with the “First in the South” presidential primaries looming in 2024 expect national organized labor activists – and their right-to-work rivals – to turn Charleston into ground zero for a major national battle.

(Not unlike the fight over the Boeing facility … which has turned out to be another crony capitalist disaster for the Palmetto State).

In the meantime, don’t expect the logjam off the Palmetto State coast to clear anytime soon …

“It’s going to get worse before it gets better,” my waterfront insider predicted.

The Queen Is Pissed …