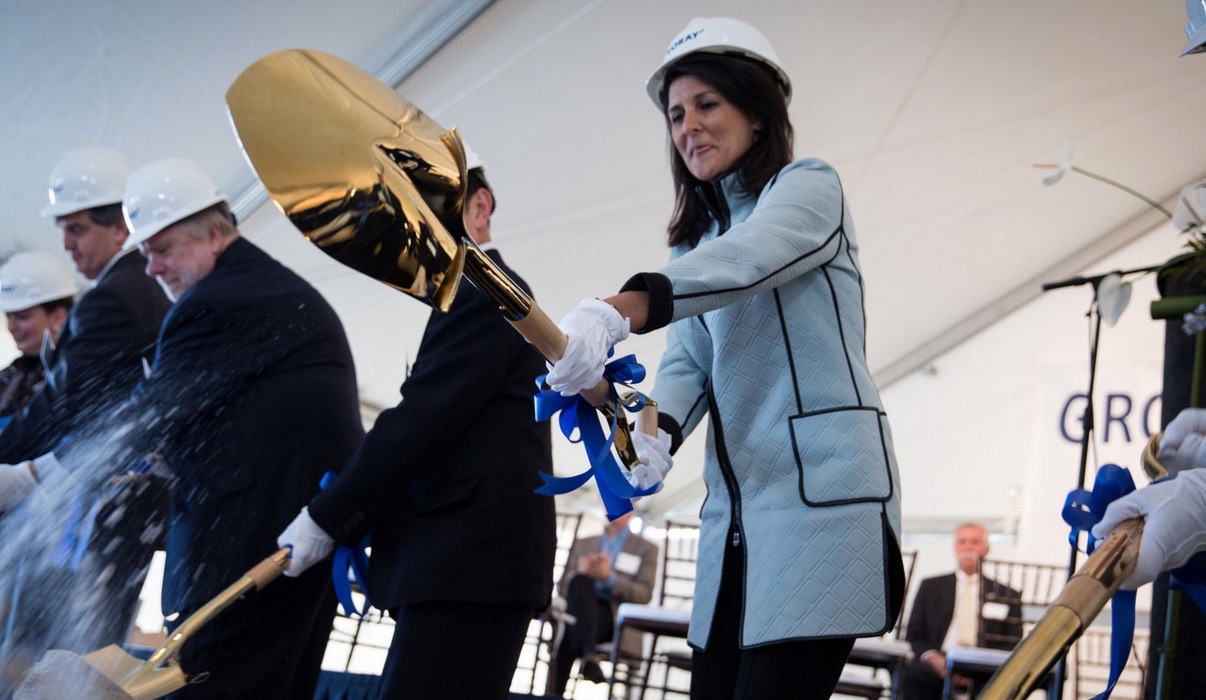 S.C. governor Nikki Haley has made hating on labor unions an underlying theme of her national ambitions.  When she first came into office in 2011 (no pun intended), she vowed to “talk smack” to unions – and she’s done so.  Repeatedly.

Never mind that South Carolina has one of the lowest percentages of organized employees of any state in the nation … and that Haley’s tough talk rings especially hollow here.

“We discourage any companies that have unions from wanting to come to South Carolina because we don’t want to taint the water,” Haley said during her campaign for reelection in 2014.

Still, she gives them hell …

In fact she once claimed one the reasons she frequently wore high heels was to “kick” unions.

Odd, then, that Haley’s Department of Commerce – the state’s primary “economic development” agency – would employ one of the labor unions she claims to be fighting.  And not just any union, either.  We’re referring of course to the IAM – otherwise known as the International Association of Machinists and Aerospace Workers.

This is the labor organization that’s been trying to unionize the heavily government-subsidized Boeing facility in North Charleston, S.C. Haley opposed the IAM’s efforts at the Boeing facility – going so far as to run radio commercials against the unionization drive.  IAM is also the union that filed suit against Haley in 2011 for fostering a “governmental policy of hostility to unions and workers seeking to join unions.”

Imagine our surprise, then, to stumble upon a press release touting IAM’s work with Haley’s Commerce Department – which oversees three government-run railroads in the Palmetto State.

The release – which hasn’t been posted on the Commerce Department’s website – celebrates Palmetto Railways as a “successful company owned and operated by the State of South Carolina.”

Yeah … there’s the first problem.  South Carolina has absolutely no business running a railroad – let alone three of them.  This clearly isn’t a core function of government.  Also, the fact this railroad network is run out of the state’s economic development agency reeks of crony capitalism.

Anyway, the release goes on to single out the IAM by name, saying that a recent national award won by the state “would not have been possible without the combined efforts of all South Carolina state employees and members of the International Association of Machinist(s) and Aerospace Workers.”

The release refers to the IAM by its longer acronym – IAMAW – but it leaves absolutely no doubt as to the organization it is referencing.  To say nothing of the nature of the relationship between the union and Haley’s cabinet.

“The longstanding contractual relationship between the State of South Carolina and IAMAW points to the ongoing success of a joint union and non-union operation,” the release stated.

So to recap: The labor union Haley has targeted in radio commercials, that she has vowed to “kick” with her high heels and that has actually sued her and her administration … is also employed by her administration.

Yeah … let that sink in for a moment.

We reached out to the Department of Commerce seeking comment on this curious state of affairs but didn’t immediately receive a response.

Also of interest?  Sources tell us Haley and her “economic development” leaders were repeatedly warned about the bad optics associated with the IAM contract with Palmetto Railways – but chose to ignore those warnings and continue employing IAM workers anyway.

Remember that the next time Haley bashes unions … (which she actually did last week in this story in The Greenville News).

The McGills: May 20 Court Date Set

She panders, she tells whoppers. She has watched the scandal after scandal and done nothing. Since she has become Governor her budget has grown, the pension system has doubled its debt while her appointee is chairman. DSS is still a mess and so is Juvenile Justice.

Trump scares people like that because he can out them with one comment, whereas the other politicians all take blood oaths to cover for each other!

I heard a troubling thing from a traveling salesmen about the Boeing plant last Friday… he said there was a “lack of activity”…a strange lack of activity. He fully intended to suggest that lack of activity might be an indicator of the future too.

I hope he was misinformed.

It must be true because it came from a “traveling salesman”.

I’m actually fishing to see if anyone else heard such a thing.

I prefer a Traveling Wilbury

“We reached out to the Department of Commerce seeking comment on this curious state of affairs but didn’t immediately receive a response.”

That’s because you called during Bar-O-:30 and Bobby Hitt doesn’t take calls between drinks.

That ahem railroad union might indeed come in handy for Haley because when President Trump takes office and Haley’s NOT around
Well you know that union-hack railroad might just be her only means of transportation when’s she’s tarred and feathered and run out of town !!!

“when’s she’s tarred and feathered and run out of town !!!

doesn’t count unless she is naked….

Butt, would that automatically lead to the declaration of a HAZ-MAT location?

We should work on that….

Why didn’t her parents get her the help she needed years ago?

The gold shovels a bit much huh ?

Haley’s staffers have been buying gold dildo’s from Robert Ford on the down low. One of them thought a gold shovel would be good for continuity.

I can’t tell you what the white gloves are for, it’s just too nasty.

South Carolina is so over with this witch….. She has no where to go because her little Rubicon aint gonna win…..maybe back to pandering at Lexington Medical…

NAH, just like the high school slut everybody took turns with:
THEY HAVE ALREADY HAD HER!!!!!!!!

Having been a union member, I have nothing good to say about them.

Did NIMRATA get dressed in the Tele-Tubbies closet?

We need Templeton. Now. Get the unions out of SC! She did it at LLR for Boeing. She’ll clean these Teamsters out.

I am currently a member of the IAM in Washington state and have been for years. Only an idiot would be blind still to the benefits of being in a union after all this time. Sure, it’s not perfect but I make 80,000$ a year instead of the 50,000$ I would make doing the same job outside of the union. Numbers don’t lie.