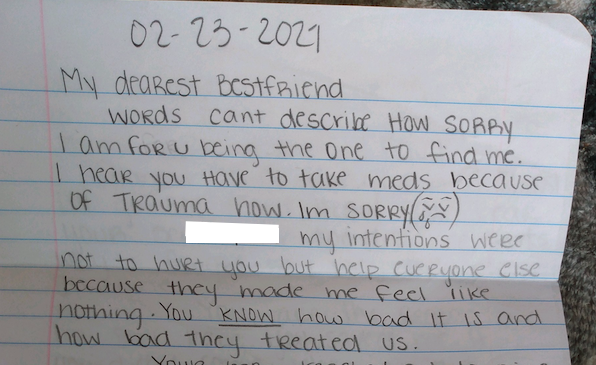 For more than a year, sources at the S.C. Department of Juvenile Justice (SCDJJ) have been sounding the alarm to expose the imploding disaster inside the state-run facilities.

Recently, FITSNews obtained a letter that sheds light on a tragic perspective of the lives affected by the scandal-scarred agency — from the kids at the Upstate Evaluation Center (UEC) in Union, South Carolina.

Earlier this year, a 16-year-old girl — who will be called “Jane” for the sake of privacy — tried to hang herself by a sweatshirt in the shower at the UEC, according to sources close to the situation (who told us the story below).

Jane would always sing in the shower, so her best friend — who will be referred to as “Sarah” in this story — immediately knew something was wrong when she heard nothing but silence from the bathroom.

As each minute passed, the quiet became more concerning for Sarah.


She tried to get the guard to check on Jane, but was told to get back in her pod.

Several more minutes passed, and the bathroom was still silent. Again, she tried the guards and begged for them to open the shower door, but was ordered to mind her own business.

She pounded on the bathroom door and screamed as loud as she could to try to get in.

Finally several minutes later, a guard opened the door and Sarah bolted into the bathroom and saw something no teenager should ever have to see — her lifeless best friend dangling by a sweatshirt.

They got Jane down and immediately started CPR.

Jane was hospitalized and then transferred to another facility.

In a heartbreaking letter to Sarah, Jane explained why she tried to kill herself at the UEC.

“My intentions were not to hurt you but help everyone else because they made me feel like nothing,” the 16-year-old wrote of her suicide attempt. “You know how bad it is and how bad they treated us.”

When Jane says “they,” she is talking about DJJ employees, specifically the guards at the UEC, according to a source close to the situation.

“Best friend that place is horrible,” Jane said of the UEC. “I don’t want you guys to suffer without me. It’s not fair that I had to attempt suicide to be heard. But I don’t want you to think this is your fault.”

In the letter, she thanked her friend for saving her life.

“Honest to god… I almost let go but I felt like I could hear your scream in the distance and that’s why I fought my way through the blurriness,” Jane wrote. “You are the reason I’m still here. You saved me…. so thank you best friend. I love you. Don’t ever forget that.”

A source close to the situation told us that kids are being abused by guards at the UEC. The source said the SCDJJ is a “legalized system of child abuse.” Particularly, the source said they lock the teenagers in what they call a “wet cell” — an isolated room with no bed or furniture — for days at a time.

Sarah was sent to the wet cell for two weeks after she disobeyed the guard’s orders when she was trying to save Jane, according to our sources.

In the last few months, we’ve heard from dozens of SCDJJ sources who have all echoed the same sentiment — the situation at the SCDJJ is exceedingly dangerous for both frontline employees and juveniles.

“Does someone have to die before they do anything?” a SCDJJ employee recently asked.

Jane almost did die — but her suicide attempt was kept quiet and the dangerous cycle inside SCDJJ facilities kept spinning.

This week could be a major turning point for the employees and juveniles at the SCDJJ.

For several weeks now, the S.C. Senate corrections and penology subcommittee has been reviewing a damning SCDJJ audit by the S.C. Legislative Audit Council (SCLAC).

The report concluded that SCDJJ director Freddie Pough — who was hand-picked by Gov. Henry McMaster to fix the troubled agency — isn’t doing the job.

In fact, auditors concluded that the agency is now worse than it was in 2017, when SCLAC’s last audit led to the resignation of the former SCDJJ director, who was appointed by Nikki Haley.

This audit could have similar consequences for SCDJJ leaders.

On Thursday morning, Pough will be questioned (likely grilled) by lawmakers about the disturbing audit on SCDJJ.

The audit provides evidence of what sources have been telling FITSNews for years — SCDJJ is spiraling out of control as the number of security officers decreases and the number of violent incidents climbs.

At the UEC, for example, monthly recorded incidents have increased 372 percent since Pough took over, according to the audit.

Essentially, auditors said SCDJJ officials have created a disastrous and exceedingly dangerous cycle within its facilities. They aren’t spending enough money on programs to keep incarcerated teenagers occupied and out of trouble, which has sparked an increase in violence. Adding fuel to the flames, the agency has failed to offer essential employees competitive wages, so its security staff members are leaving in droves.

Most of the problems detailed in the SCLAC report revolve around SCDJJ’s staffing shortage and the agency’s inability to retain qualified staff who can keep the facilities safe. SCDJJ has lost over 32 percent of its security positions since 2017 while violence has increased by 42 percent at its facilities.

FITSNews has spoken to dozens of SCDJJ employees who confirmed it was fairly common for guards to work 24-hour shifts as the workforce shortage has gotten worse.

Multiple guards told FITSNews that they often put kids in isolation because they don’t have a choice when they are outnumbered to such an extent.

While the report contained damning information on the SCDJJ — one of the most troubling accusations was that SCDJJ leaders falsified records on sexual assault reports and downplayed the severity of gang-related violence in incident reports.

Senators who reviewed the audit last month were not only alarmed that the SCDJJ was mismanaged — they were concerned officials might have committed crimes.

McMaster has stood by Pough as the SCDJJ has continued to spiral and said he has “full confidence” in the embattled leader.

Is It Getting Worse?

Last year, the Department of Justice (DOJ) reported that conditions at the Broad River Road Complex (BRRC) in Columbia, South Carolina, violate the Fourteenth Amendment of the Constitution.

It appears that not much has improved since the DOJ wrote that report in February 2020. If anything, it might have gotten worse.

Last week, a behavior specialist at the BRRC was charged with sexual misconduct, FITSNews founding editor Will Folks first reported.

In April, three violent incidents occurred within 24 hours at the BRRC

Auditors found that the 2019 riot was caused in part because of staffing issues.

“The gravity of the situation is so severe, because staff is responsible for the well-being of the kids,” a BRRC worker told us. “Because it is so poorly staffed, these kids are not getting the adequate care that they need. Sometimes if a kid is injured or feeling suicidal, it could take a couple hours before they are seen by medical staff. And if a juvenile is feeling suicidal, they are placed in Laurel Unit on lockdown. To say that the staffing situation is at a dangerous level is an understatement.”

Lawmakers tasked with reviewing the SCDJJ audit have expressed urgency in the fight to fix the SCDJJ.

“Our job is to protect the children and the staff at DJJ,” S.C. Senator Katrina Shealy said. “Everybody’s worried about management and (saying) that we don’t want to hurt anybody’s feelings, but there are a lot of children out there and y’all need to be thinking about them and quit worrying about management. Think about the staff and their safety…. That’s what I’m worried about.”

Tomorrow, the Law Enforcement and Criminal Justice Subcommittee of the House Legislative Oversight Committee and the Senate Corrections and Penology Subcommittee will meet in the Gressette Building in Columbia, South Carolina at 10 a.m. to question Pough and discuss the state of the SCDJJ.

FITSNews will cover the meeting tomorrow and will continue to shine a light on the problems at SCDJJ —the agency has been tasked with performing a core function of government – a key part of the broader criminal justice system that includes law enforcement, courts and corrections.