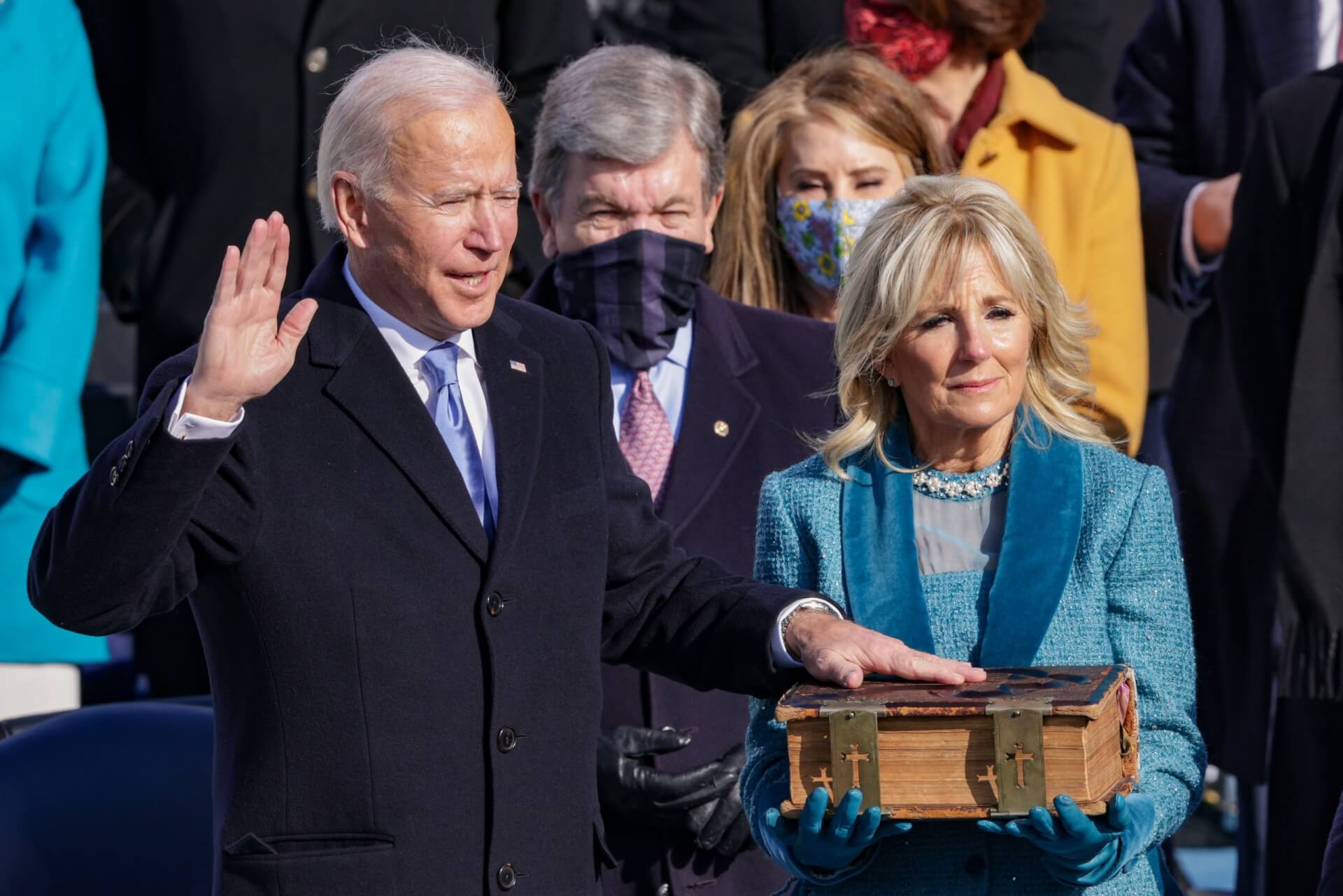 Former U.S. senator and vice president Joe Biden took the oath of office shortly before 12:00 p.m. EDT this Wednesday, January 20, 2021 to become the United States of America’s 46th president – preaching unity and pledging to “end this uncivil war that pits red against blue.”

“So help me God,” Biden said in concluding the famous presidential promise, his right hand raised into the air and his left hand placed on a five-inch thick family Bible that was previously used to swear him in as vice president in 2009 and 2013 (and as a U.S. senator way back in 1973).

Upon completing the oath, the 78-year-old Biden became the oldest president in American history. In fact, on his first day in office the Scranton, Pennsylvania native was older than the late Ronald Reagan on his final day in office.

Reagan was previously the nation’s oldest chief executive, attaining the age of 77 when he left office in January 1989 (the year after Biden mounted his first bid for the presidency, ironically).

Despite his lengthy tenure in Washington, D.C. – 36 years in the U.S. Senate and eight years as vice-president – Biden is among America’s least likely presidents. In fact, he was nearly knocked out of the Democratic presidential primary last February.

Readers will recall Biden departed early-voting New Hampshire with his formerly front-running presidential candidacy in tatters – finishing fifth in a crowded Democratic field. Prior to that, Biden finished in fourth place in early-voting Iowa.

Pundits wrote his candidacy off … although Democratic power-brokers rallied to his defense, believing him to be the candidate most likely to defeat GOP incumbent Donald Trump.

Which state wound up saving Biden’s proverbial bacon in the primary? South Carolina …

“George Bush said to me today, ‘you know, you’re the savior because if you had not nominated Joe Biden, we would not be having this transfer of power today,’” Clyburn told reporters on Wednesday. “He said to me, ‘Joe Biden was the only one who could have defeated the incumbent president.’”

Biden preached unity in his speech to a deeply polarized nation – one in which three swing states granted him his electoral college victory margin by a scant 42,921 combined votes (out of more than 158 million ballots cast nationwide).

Nevertheless, disputes over the conduct of the 2020 election led to a GOP effort to challenge the certification of Biden’s electoral college victory. During that process, a mob of mostly Trump supporters stormed the U.S. capitol building in Washington, D.C. – a violent melee which saw five people killed and dozens more injured.

Trump was impeached in the aftermath of the riot for allegedly inciting the mob to violence. Now, the U.S. Senate must determine whether to convict him – and potentially bar him from ever seeking the presidency again.

Against this dramatic and polarizing backdrop, Biden took the podium in Washington, D.C. on Wednesday morning to preach a message of national unity.

“To overcome these challenges, to restore the soul and secure the future of America requires so much more than words,” he said. “It requires the most elusive of all things in a democracy: Unity. Unity.”

Biden quoted 16th president Abraham Lincoln as saying he would put his “whole soul” into that task.

Biden implored America to “start afresh” – specifically imploring those who did not support his candidacy to give him a chance to lead.

We concur with that assessment … although we will certainly wait and see whether Biden consistently practices what he preaches.

On the policy front, Biden is expected to begin his administration with a flurry of executive orders.

“There is no time to waste when it comes to tackling the crises we face,” Biden wrote in his first presidential tweet. “That’s why today, I am heading to the Oval Office to get right to work delivering bold action and immediate relief for American families.

One order will implement a nationwide “mask mandate” in federal buildings and on federal lands, while another will revive the office of “Global Health Security and Biodefense” within the White House. A third Covid-19-related executive order will put the United States back in the World Health Organization (WHO).

Additionally, Biden plans on signing executive orders that will recommit America to the Paris climate agreements – while revoking permits for the Keystone XL pipeline. These are the first of what are expected to be “hundreds” of reversals of Trump-era environmental policies.


On the immigration front, Biden will restore travel and immigration into America from the nations of Eritrea, Iran, Iraq, Kyrgyzstan, Libya, Myanmar, Nigeria, Somalia, Syria, Sudan, Tanzania and Yemen – reversing the so-called “Muslim travel ban” adopted by Trump in 2017 (and expanded in 2020).

As previously reported, Biden will also stop construction on Trump’s border wall – and begin counting non-citizens in the U.S. Census.

Bigger ticket items – including his proposed $1.9 trillion “stimulus” – will require legislative approval. Also, we will be very interested in seeing how Biden – who campaigned as a “moderate” – works with the radical wing of his party, which is pushing to pack the U.S. supreme court, add seats to the U.S. Senate, defund the police, collect reparations for slavery, censor speech (and other liberties), open the border in perpetuity, further socialize medicine and impose all manner of anti-competitive policies on the nation’s economy.

Trump did not attend the inaugural, traveling instead to his home at the Mar-a-Lago Club in Palm Beach, Florida.

“I will be watching, I will be listening,” the former president told reporters prior to departing the White House. “We will be back in some form.”