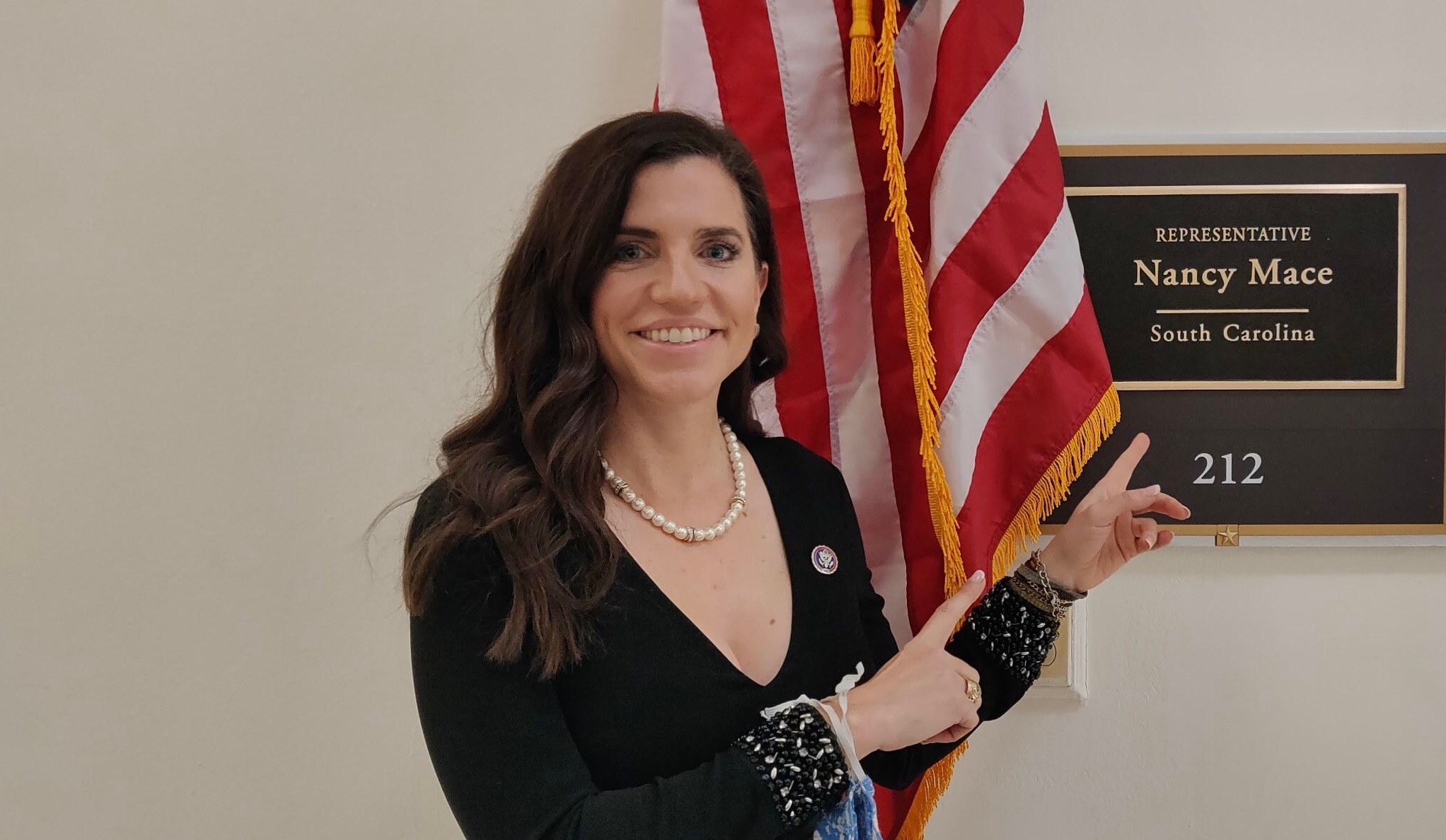 First-term congresswoman Nancy Mace of South Carolina is in the midst of a bitter battle within the freshman GOP caucus – and with members of her home state’s Republican delegation – following the violent rioting that rocked the U.S. capitol last week.

Well, to be precise: The broader civil war spawning all of these battles was already underway …

The rioting has only intensified things …

A former campaign staffer and erstwhile supporter of U.S. president Donald Trump, Mace has apparently decided the best way to walk the tightrope regarding her former allegiance to the 45th president is to … well, not even try.

Mace has made multiple waves in Washington, D.C. this week, sparring with pro-Trump members of her freshman caucus and then suggesting that lawmakers who objected to certifying U.S. president-elect Joe Biden’s electoral college victory over Trump should be censured (although her office disputed that characterization of her statements).

(Via: Greene for Congress)

According to Alayna Treene of Axios, the testy exchange began when Greene (above) forwarded an article to the group asserting that Trump had gained support amongst the American electorate in the aftermath of the riots.

“I’m disgusted by what you and other Q-conspiracy theorists did last week in the chamber after all of the violence,” Mace wrote in a group reply to Greene’s message.

Greene responded that she condemned the violence at the capital – as well as the bloody Black Lives Matter riots that did $1 billion worth of damage in city centers across the country last year.

Greene – who was supported in the exchange by freshman congressman Burgess Owens of Utah – was livid that the group’s confidential exchanges had been leaked to the media.

“Who is the freshman representative that is betraying everyone’s trust and leaking our group chat to the press?” she told Axios.

While Mace was sparring with her fellow freshmen, she was also making waves within the South Carolina Republican delegation – suggesting to a CNN reporter that “censure should be on the table” for GOP lawmakers who voted to reject the certification of Biden’s electoral college victory.

Eight U.S. senators and 139 GOP members of the U.S. House voted to object to the certification of electoral votes.

Included in that tally? All of the other GOP members of the S.C. congressional delegation – Jeff Duncan, Ralph Norman, Tom Rice, William Timmons and Joe Wilson. Also included? House minority leader Kevin McCarthy, who was one of Mace’s first and most important establishment endorsements in her 2020 campaign for the House.

According to Mace’s communications director, Natalie Johnson, the reference to censuring fellow lawmakers reported by CNN was not directed at members of congress who voted in support of various electoral challenges. Instead, Johnson told us it was a reference toward lawmakers whose speech incited violence.


One of Mace’s fellow delegation members told us that was consistent with their understanding of her comments as well, saying they believed Mace was referring to U.S. congressman Mo Brooks of Alabama and his “crew” in referencing censure.

“I anticipate that happening,” the lawmaker told us, referring to a potential censure of Brooks.

Not all of Mace’s colleagues were buying the clarification, though.

“She has lost it,” one of Mace’s fellow delegation members told us. “Better dance with the one who brought you, (as) they say.”

“Freshman goes after her party caucus leader days after being sworn in,” one Washington, D.C. operative told us. “Man, talk about dumping flaming oil on your head to get a media hit.”

Is he correct? Is Mace setting herself on fire? Or worse … is she following in the footsteps of U.S. senator Lindsey Graham and becoming a “Washington weather vane?” Flowing with the ever-leftward currents as opposed to standing firm on the principles that got her elected?

As we noted in an article yesterday addressing issue of election reform, we continue to believe it is highly likely that fraudulent voting took place in several key swing states with respect to mail-in ballots.

Still, we believe Trump and his allies failed to prove how “specific fraudulent acts provided Biden with his winning margin in (four) battleground states.”

“We have not seen the evidence-based narrative necessary to support a legitimate electoral challenge,” we wrote on the day before the riots, concluding there were no grounds upon which to block Biden’s certification.

Still, we do not believe those questioning the results of the 2020 election – or vigorously protesting what they believe was a stolen vote – ought to be demonized. Or censured.

To us, that constitutes free expression and free speech … which must never be conflated with the lawless violence inflicted on the seat of our national government last week. Similarly, we must never conflate legitimate calls for racial justice with the mob violence that overtook so many American cities – including Charleston, S.C. – in the aftermath of the killing of George Floyd last spring.

Seriously, people … this is not complicated.

Is it so hard to draw a simple demarcation line when it comes to violence – or threats of violence – and hold everyone accountable when they cross it?