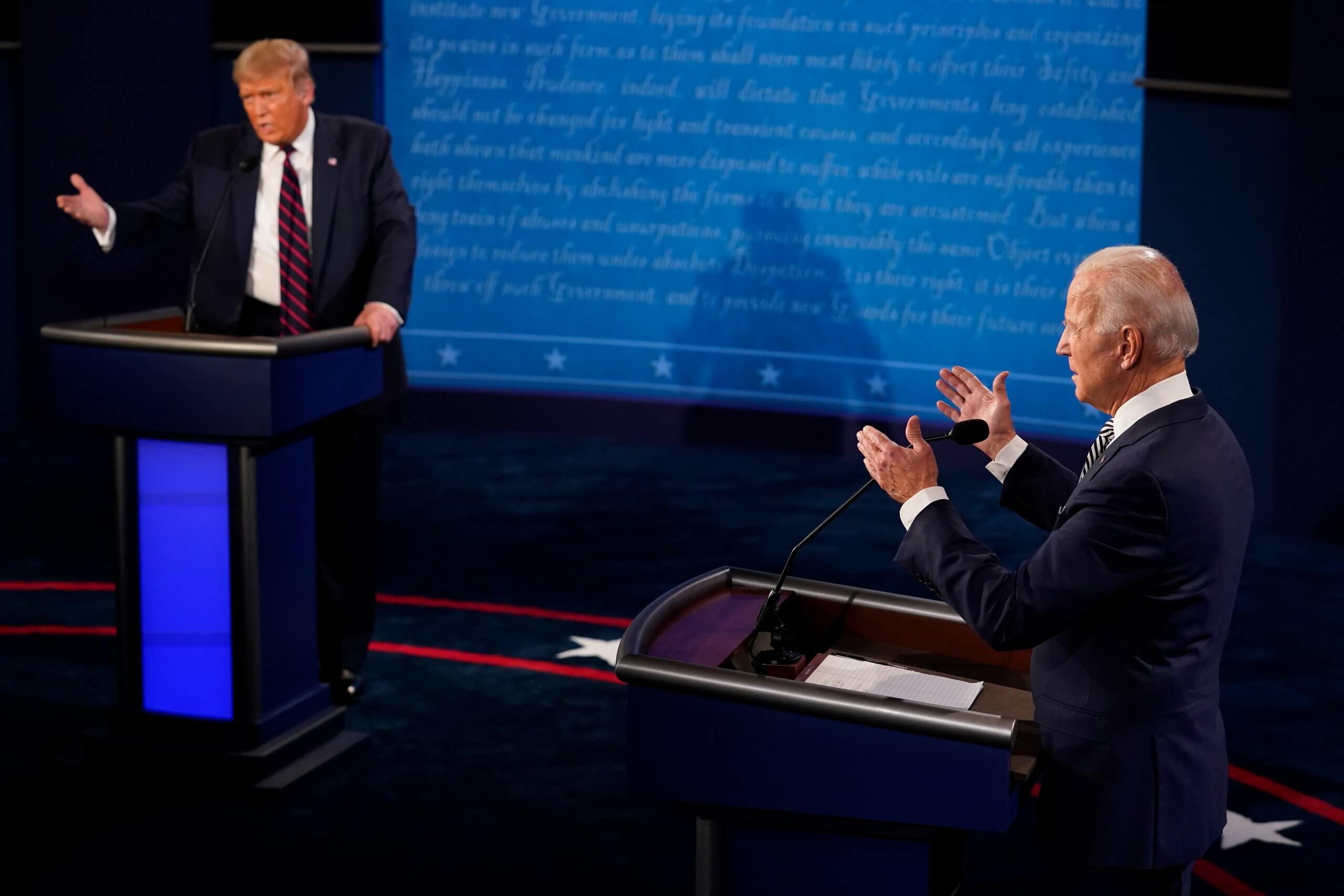 There is obviously a lot to unpack from the first presidential debate of the 2020 election – held on Tuesday night in Cleveland, Ohio. First and foremost? Jo Jorgensen, the 2020 Libertarian party nominee, was not allowed to participate in this exchange of ideas … such as it was.

That was disappointing … particularly in a country where a plurality of voters do not identify with either major party.

And particularly given the reflexive, hypocritical tribalism evidenced by both major parties right now.

With Jorgensen absent from the proceedings, America was “treated” to an unruly back-and-forth between U.S. president Donald Trump and former vice president Joe Biden, the 2020 Democratic nominee.

To say Biden exceeded expectations is an understatement … but then again, when those expectations included possibly falling down and/ or dying on stage, well, that’s not a high bar to clear.

As for Trump? He was aggressive to the point of bellicosity … leading a litany of interruptions that made the discussion difficult to follow. And which provided ample fodder for mainstream media outlets eager to pillory his performance whether he succeeded or failed.

According to Fox News – whose moderator Chris Wallace was clearly in the tank for Biden on Tuesday night – Trump interrupted his rival 71 times and interrupted Wallace 74 times, while Biden interrupted the president 49 times and Wallace 18 times.

As a result of all the crosstalk, the commission on presidential debates announced it was “carefully considering” formatting changes for the two remaining debates in order “to ensure a more orderly discussion of the issues.”

The most famous interruption of the evening?

When an exasperated Biden exclaimed to Trump, “will you shut up, man?”

That rejoinder quickly went viral … although it is probably important to bear in mind what Trump was badgering Biden about at that particular moment in the debate.

Forgotten already? Allow us to refresh your memories: It was a back-and-forth over whether Biden intends to pack the U.S. supreme court with additional justices in the event Trump’s nominee to replace the late Ruth Bader Ginsburg is confirmed by the GOP-controlled U.S. Senate.

TRUMP: Are you going to pack the court?

TRUMP: Are you going to pack the court?

BIDEN: Make sure you, in fact, let people know, your Senators.

TRUMP: He doesn’t want to answer the question.

BIDEN: I’m not going to answer the question.

TRUMP: Why wouldn’t you answer that question? You want to put a lot of new Supreme Court Justices. Radical left.

BIDEN: Will you shut up, man?

“Will you shut up, man?” was certainly a memorable line, but “I’m not going to answer the question” has the potential to loom large for Biden, too. So does his refusal to answer the question of whether he and his fellow Democrats would approve statehood for Washington, D.C. and Puerto Rico (a.k.a. the election of four new Democratic senators).

Packing the legislature, in other words.

And of course the rest of his not-so-moderate agenda …

“This time around, once the Democrats win, they will change the rules so they can never lose again,” noted Andrea Widburg for American Thinker. “Heed this warning: if Biden wins, our constitutional America is gone.  We will be a socialist country.  If you don’t believe me, just read the Democrat platform.  They’re not hiding their goals.”

Trump’s bet? That enough Americans who don’t want to live in a country like that will vote for him … in spite of himself.

This news outlet has said for the past three-and-a-half years that we cannot bring ourselves to endorse Trump again. He betrayed us and other fiscal conservatives on the tax and spending promises he made as a candidate in 2016 – and his caustic, cacophonous performance on the debate stage in Cleveland was another glaring example of how he remains his own worst enemy.

“Central to the Biden team’s strategy is their recognition that Mr. Trump’s Achilles’ heel is personal criticism,” noted Daniel Henninger for The Wall Street Journal. “He can’t take it. Ever. His instinct to crack back is hair-trigger.”

But (and this is a huge “but”) … can America survive as a free and prosperous nation under the socialist hordes Biden would bring with him to Washington? Especially if they plan to pack the court and the congress?

We have said it before, we will say it again: This is why our nation needs more choices at the polls … and why it is so disappointing that we do not have them.