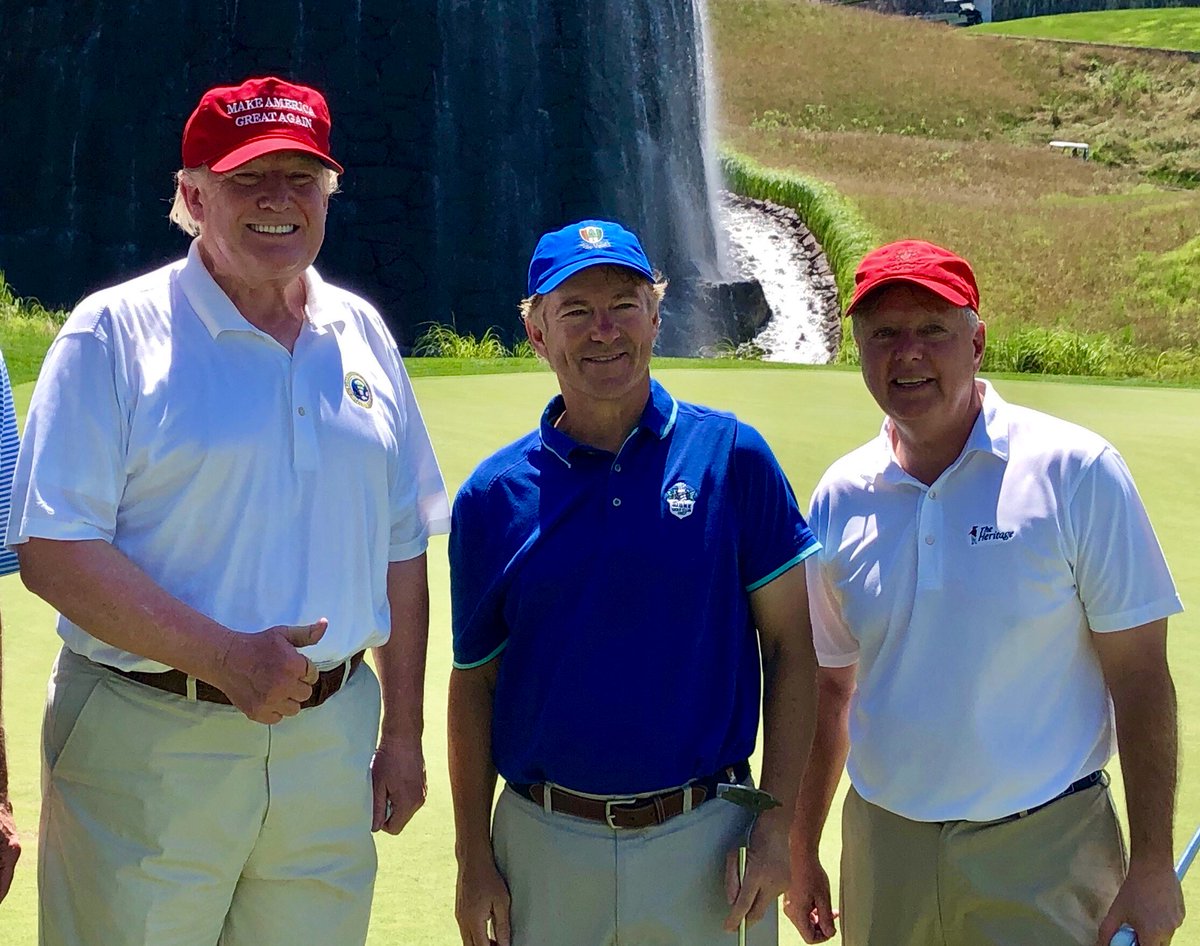 A new television advertisement is going after U.S. senator Lindsey Graham over his golf outings with “ally” Donald Trump – raising questions as to whether the career politician is fully supportive of the president’s agenda.

“I love golf and I’m fine with Lindsey Graham playing golf with President Trump,” the ad’s narrator stated in the 30-second spot. ” But here’s the rub: What does he do with all that access and supposed power?”

“Graham is against the president on term limits, he fights FOR drug companies and FOR cuts to Medicare and Social Security,” the narrator continued. “Oh, and he’s taken millions from special interests.”

“Twenty-five years in Congress has turned Lindsey Graham into a living, breathing example of the swamp we need to get rid of,” the narrator concluded.

The ad is the handiwork of the Senate Majority PAC, an organization “solely dedicated to building a Democratic majority in the U.S. Senate.”

“Lindsey Graham has nothing to show for his 25 years in Washington and South Carolina voters know it,” the group’s spokesman Matt Corridoni said in a statement. “Instead of using his access to help his constituents, Lindsey Graham is taking money from the special interests and voting to gut Medicare and Social Security. Graham is a typical D.C. politician who represents the worst of the Washington Swamp.”

The ad is part of a $6.5 million media buy in the Palmetto State aimed at influencing an unexpectedly tight race between Graham and Democrat Jaime Harrison.

Just this week, Roll Call added Graham to its list of America’s ten most vulnerable GOP senators – noting that “outside groups have started to spend in the Palmetto State.”

Can Harrison pull off the upset, though?


“Question marks here include whether Harrison can win independents and moderates or tap into enthusiasm from young and black voters who might otherwise stay home,” Roll Call noted in its assessment.

Our big question mark? Whether Graham and his allies will continue to ignore Harrison’s vulnerable left flank.

As we noted in a recent post, “Harrison played an integral role” in the theft of the 2016 Democratic presidential nomination from socialist U.S. senator Bernie Sanders of Vermont.

Remember this scam? Wealthy Democratic donors would write big checks to a “victory fund” supporting former Democratic presidential nominee Hillary Clinton. This fund would in turn wire money to state Democratic parties – which would then route the money to the DNC (often on the same day).

This creative funneling process enabled these wealthy donors to bypass limitations on the amount of money they could give to the national party, which – as it became clear during the #DNCLeaks saga – was totally in the tank for Clinton and actively working to sabotage Sanders’ candidacy.

As many as 400 Democratic donors funneled up to $9.3 million to the national party through this shady network of “state party passthroughs” – including the S.C. Democratic Party (SCDP).

Was Harrison involved in this scam? Absolutely.


Not only was the SCDP one of the state parties that participated in funneling donor money to the DNC, but at the time of the funneling he was employed by a lobbying firm founded by Clinton campaign manager John Podesta.

Harrison also conveniently would up being one of Clinton’s superdelegates at the 2016 Democratic national convention – and was rewarded for his efforts on behalf of the Clinton machine with a coveted speaking slot.

Why has Graham failed to seize on this vulnerability? Why haven’t his allies exposed Harrison as a fraud with the progressives he is depending on turning out for him next month?

Good question … but along with his ongoing failure to win over the conservative wing of the SCGOP, Graham’s inexplicable inability to divide and conquer the Democratic electorate is one of the two main reasons he is in danger of losing this seat.

That is significant considering Democrats have not won a U.S. Senate race in South Carolina since 1998 – and have not won a statewide election since 2006.