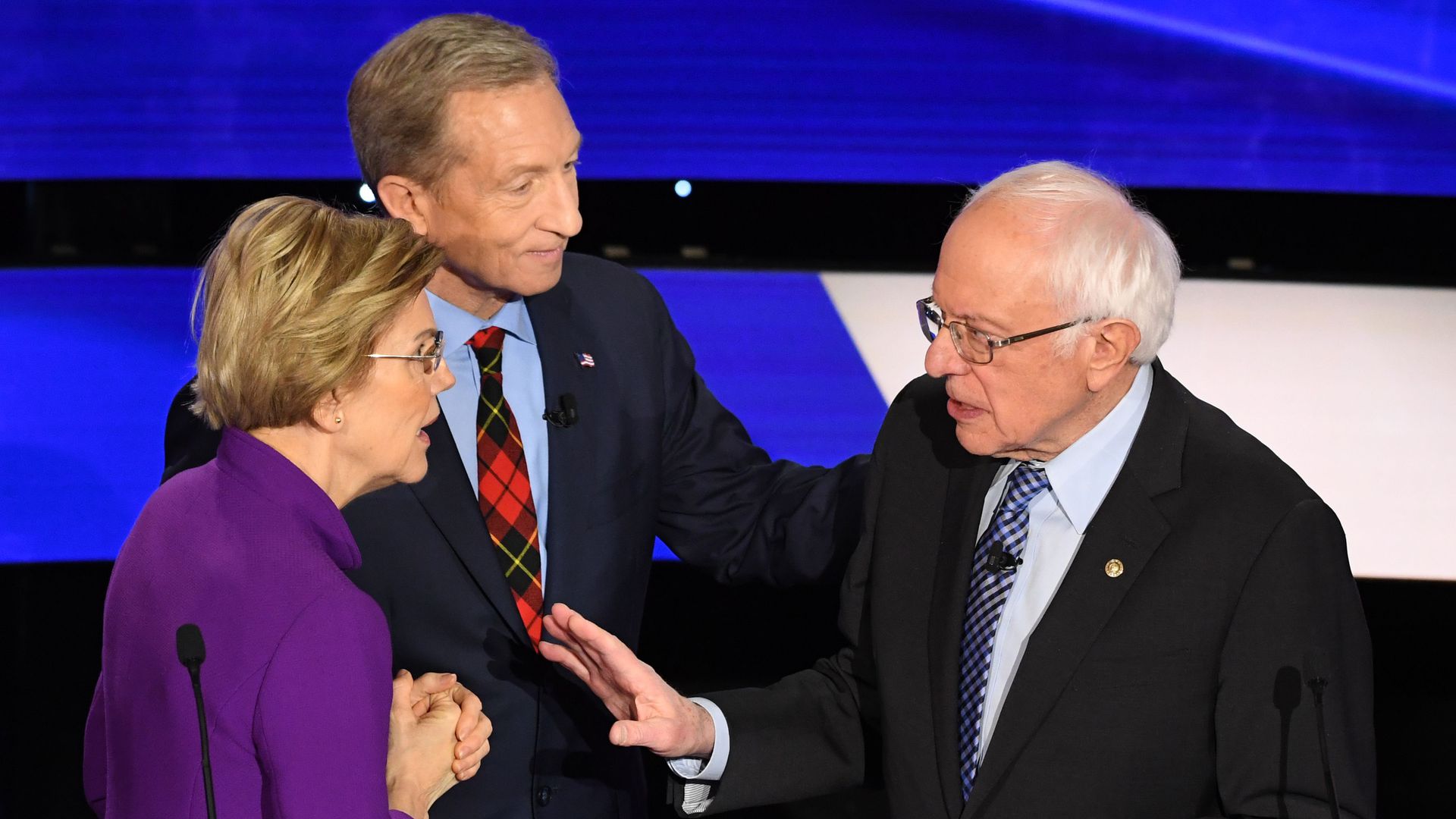 We already knew about the rift between establishment candidate Joe Biden and the progressive wing of the Democratic party. But is the lunatic fringe (sorry, America’s far left) similarly splintered? That would certainly appear to be the case after the latest Democratic debate – which in addition to drawing terrible aggregate reviews saw a high-profile spat between top tier liberal candidates Bernie Sanders and Elizabeth Warren.

The debate – held in early-voting Iowa – featured the top six candidates in the upcoming race for the first round of delegates. In addition to Biden, Sanders and Warren, South Bend mayor Pete Buttigieg, U.S. senator Amy Klobuchar of Minnesota and liberal billionaire Tom Steyer.

How did they do?

Not well, according to the liberal media … which fretted over the party’s ability to select a viable alternative to U.S. president Donald Trump.

“I came away feeling worried for the Democratic Party,” liberal CNN commentator Van Jones said. “I felt like tonight was the night they were going to all put the fireworks out there, you’re going to see the best of the best, and it just felt like a big bowl of cold oatmeal.”

“Democrats have to do better than what we saw tonight,” Jones added. “There was nothing I saw tonight that would be able to take Donald Trump out. And I want to see a Democrat in the White House as soon as possible.”

But while progressive pundits pondered the underwhelming performances turned in by their top six standard-bearers, an ongoing feud between Sanders and Warren took center stage.

As the Iowa debate concluded, candidates mingled on the stage shaking each others’ hands. After taking Biden’s hand and clasping it, Warren was approached by Sanders – who extended his hand, which Warren refused to shake.

With clenched hands, Warren then engaged in a brief discussion with Sanders as Steyer looked on … a discussion which ended with Sanders throwing his hands into the air in apparent exasperation.

What was said? Steyer offered no clarity.

“Whatever they were talking about I was trying to get out of the way as fast as possible,” he said after the debate.

First of all, people … if someone offers you their hand, 99.9 percent of the time you should probably shake it.

You do not have to respect the person, agree with the person or even like the person … it is just a common courtesy. And while we can think of a few exceptions to the rule (skin rashes), we have always believed that refusing to shake someone’s hand when it is extended to you is petty and pusillanimous.

Why did Warren rebuff Sanders? Apparently, the dispute stems from a CNN report published earlier this week. According to the report, Sanders told Warren at a December 2018 meeting that he did not believe a woman could win the American presidency.

Sanders has denied the allegation, calling it “ludicrous” and claiming that “staff who weren’t in the room are lying about what happened.”

A day after the story broke, though, Warren issued a statement confirming the allegation.

“I thought a woman could win; he disagreed,” she said. “I have no interest in discussing this private meeting any further because Bernie and I have far more in common than our differences on punditry.”

Not only have Democrats chased two credible black candidates from their primary … now two of their white front-runners are battling over whether a woman can be president.

Seriously: Could Trump have scripted things any better as he makes overtures to minority voters?

While we believe Democrats’ monolithic hatred of Trump should be sufficient to unite the party behind any candidate it nominates this spring, these fissures cannot be ignored.

They played a role in the 2016 election … and they could play a role this November, too (especially these emerging divisions on the far left flank of the ideological spectrum).

Our website has focused its attention in recent years on the fault lines that exist within the Republican electorate, but the GOP has (for better or worse) united behind Trump in 2020. Meanwhile, the Democratic party – which bears no resemblance to its former self – is growing increasingly divided as socialists like Sanders and Alexandria Ocasio-Cortez gain influence.

Once again, sounds like the perfect time for a third way …