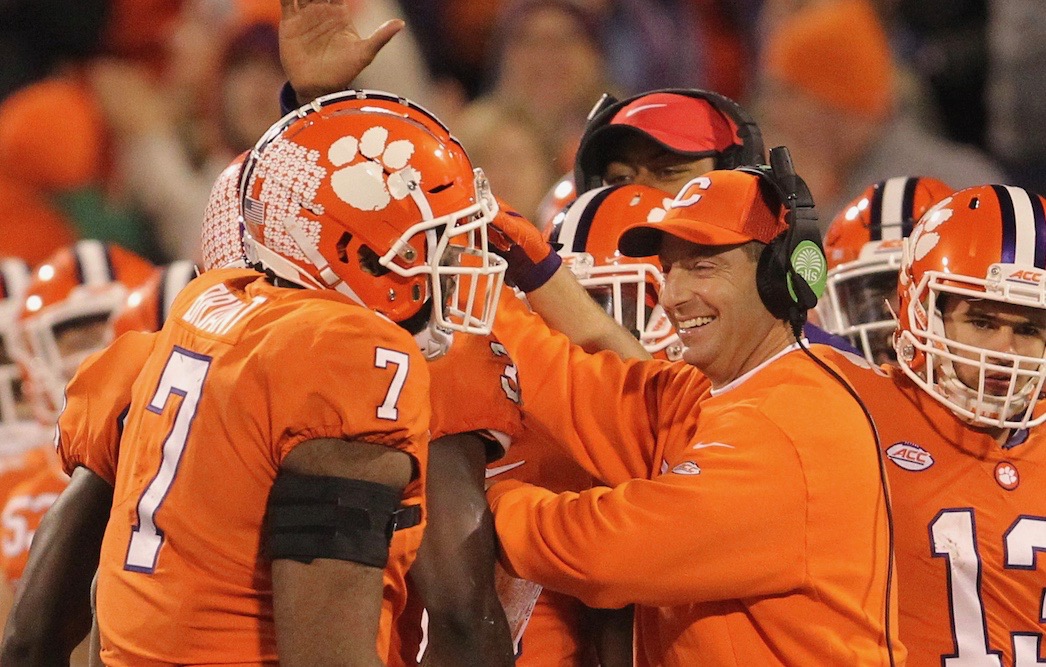 Among those appearing on the wiretap were former Clemson University assistant men’s basketball coach Steve Smith and Christian Dawkins – a disgraced sports agent who was convicted in October of paying college athletes.

According to prosecutors, the wiretaps referenced an attempt by Clemson boosters to pay former Duke University superstar Zion Williamson – a native of Spartanburg, S.C. – in the hopes he would play his college ball in Tigertown. Williamson ultimately chose the Blue Devils, playing one season in Durham, N.C. before declaring himself eligible for the 2019 National Basketball Association (NBA) draft – in which he was chosen first overall by the New Orleans Pelicans.

During the wiretapped discussion about paying Williamson, Smith referenced similar “pay-to-play” arrangements involving Clemson’s top-ranked football program – which has appeared in the College Football Playoff (CFP) four years in a row and captured national titles in 2016 and 2018.

“That’s why football is so successful, is if you do it and use resources at Clemson, like you can really keep everything tight,” Smith said. “It’s a small college town … you can come to a game one night, after the game you see a dude out there in a nice looking suit, you like, ‘wait a minute now.’”

The government witness responsible for the wiretaps, Marty Blazer, stated he “understood that to mean (Clemson) boosters would give certain things” to players.

Blazer would know, having admitted to paying multiple college football players in the hopes they would hire him as a financial advisor.

What happened in the aftermath of this bombshell disclosure? Not much, honestly. Smith (above) was fired from Clemson a week after the news broke, and athletics department officials vowed to launch an internal review of the allegations.

This month, the buzz about Clemson paying players is back …

Last week, bestselling author and commentator John U. Bacon appeared on The Michigan Insider radio show and made a very bold claim. According to Bacon, former Michigan standout Rashan Gary was offered $300,000 to attend “another school” during his recruiting in 2016.

“With the high stakes involved in recruiting, it’s not a shock and with Bacon’s reputation, if he says it, you can believe it,” Michigan football analyst Chris Peterson wrote for FanSided. “He wouldn’t report it if he didn’t have it on good authority.”

The former No. 1 national high school recruit, Gary recorded 119 tackles, 23 tackles for loss and 9.5 sacks during his three-year career in Ann Arbor, Michigan. In April, he was chosen by the Green Bay Packers with the No. 12 pick in the 2019 National Football League (NFL) draft.

Bacon did not name the school that allegedly offered Gary the $300,000 – but he did rule out one of the prime suspects.

“It was not Ohio State,” he tweeted.

Readers will recall that Gary (above) chose Michigan in February 2016 after having narrowed his decision to the Wolverines and … wait for it … Clemson.

So was Clemson the “other school” of which Bacon speaks?

We will have to wait and see, but this allegation – combined with the claims made by Smith on the federal wiretap – should be very concerning for Clemson fans.

This news outlet argued back in April that the information contained on the wiretap should have been more than enough to prompt an NCAA investigation into Clemson’s athletics programs. Of course we also noted that “trusting the NCAA to handle such an inquiry is problematic considering the entity’s history of hypocritical, politically motivated investigations.”

The agency is simply not a fair arbiter …

Bigger picture? Why are we still playing this game when it comes to collegiate athletics? And for that matter the entire higher education racket?

We have been arguing for years, the entire system “needs to be uprooted – academics and athletics – and replaced by a system that doesn’t criminalize individuals for being paid what the market will bear for their skill sets.”