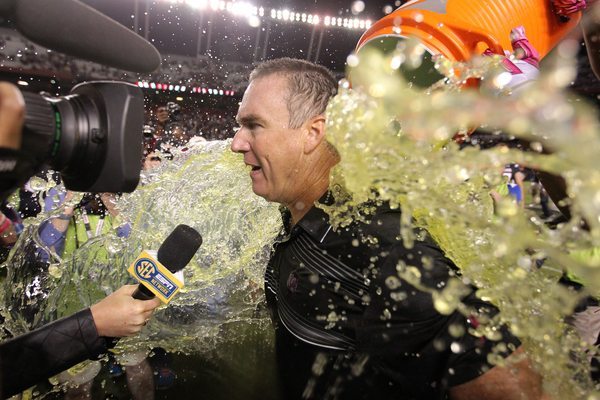 With a little help from the visor …

Prior to the Gamecocks – his Gamecocks – taking the field against Vanderbilt, Elliott held aloft the famed white visor worn by legendary head coach Steve Spurrier, who resigned earlier this week after nearly eleven years at the helm of the South Carolina program. 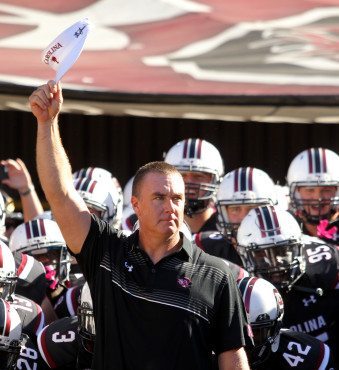 Spurrier led the Gamecocks to unprecedented heights, but they came crashing back to mediocrity in 2014 – and the first half of 2015 was an unmitigated disaster.

Citing the best interests of the program, Spurrier stepped aside and handed the reins to Elliott – who relied on an opportunistic defense to earn a 19-10 win over the Commodores.  It wasn’t pretty.  It doesn’t necessarily bode well for the immediate future of the program.  And it didn’t do much to establish Elliott as a legitimate candidate for the full-time head coaching job (even though Gamecock athletics director Ray Tanner said earlier in the day that he was in the running for the post).

Former walk-on Perry Orth completed 17 of 28 passes – including a 78-yard scoring strike to preseason All-SEC wide receiver Pharoh Cooper that put South Carolina ahead for good in the third quarter.  Cooper finished the game with seven receptions for 160 yards.  The Gamecocks also got a boost from the return of running back Brandon Wilds, who toted the rock 24 times for 119 yards in his first game back since suffering a rib injury against Georgia.

Wilds was cleared to play a week ago against Louisiana State, but said his ribs were still bothering him – drawing a rebuke from Spurrier.

Vanderbilt (2-4, 0-3 SEC) also had a 100-yard rusher.  Junior wide receiver Darrius Sims carried the ball six times for 104 yards.  He also caught three passes for 22 yards.  But the Commodores simply couldn’t get out of their own way.  Quarterback Johnny McCrady completed just half of his passes – 21 of 42 attempts – and was intercepted three times.  He also fumbled once.

The Gamecock defensive effort drew rave reviews from Elliott, whose chest-bumping, vein-bulging, high-intensity sideline demeanor was a marked contrast to the pacing and grimacing of Spurrier.

Oh, and the occasional visor-tossing …

For now, though, the visor that was thrown down has been picked up.

Things get considerably more difficult for the Gamecocks over their next few games, though, with three nationally-ranked teams left on the schedule (No. 9 Texas A&M, No. 8 Florida and No. 5 Clemson).

The Gamecocks will have to steal at least one of those games – and beat Tennessee on the road and The Citadel at home – if they hope to avoid their first losing season since 2003.