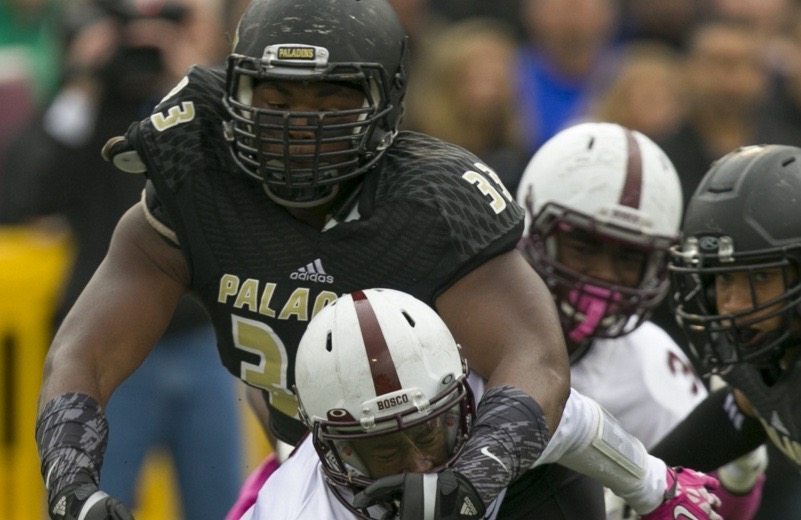 DOES CLEMSON HAVE THE INSIDE TRACK ON AMERICA’S NO. 1 FOOTBALL RECRUIT?  THEY SHOULD …

Rashan Gary has a big decision to make.  This baby-faced, bespectacled kid – who stands 6-foot-4 and weighs 287 pounds – is the No. 1 high school football prospect in America.

And the rising true freshman defensive tackle has narrowed his choice of colleges to two schools: Clemson and Michigan.

Gary will announce his decision “Lebron-style,” during a live telecast on ESPN.

Should he choose the Tigers, Gary would join fellow five-star talent Dexter Lawrence, a 6-foot-5, 335-pound tackle who is the No. 7 prospect in the Class of 2016.  Clemson has also landed the No. 21-rated talent, 6-foot-3, 239-pound outside linebacker Rahshaun Smith of Bradenton, Florida.

Clemson has plenty of reason to be optimistic Gary will don an orange cap come signing day.  Not only did head coach Dabo Swinney‘s team reach the 2015 national championship game, but the Tigers were two special teams miscues away from upsetting perennial powerhouse Alabama.

And while most of the buzz revolved around the steady, heady play of Heisman Trophy finalist Deshaun Watson – the team’s elusive dual-threat quarterback – the Tigers earned their championship shot on the strength of a punishing defense.  In fact, Clemson’s defense was better in 2015 than it was the previous year – when it lost several players to the NFL (including a pair of first round picks).

Coordinator Brent Venables has established the Tigers as an elite unit – especially on the defensive line.

In fact, if former national No. 1 pick Jadeveon Clowney were coming out of high school this year, we have no doubt he would pick Clemson over any other school in the nation.

Hell … in a rebuilding year the Tigers are going to wind up putting five prospects in the draft (including two players who are likely to go within the first ten picks).

Don’t get us wrong: Our founding editor is a lifelong University of South Carolina fan.  And his wife, the lovely Mrs. Sic Willie, grew up in Michigan and loves the Wolverines.

So we have our fingers crossed Gary will pick Michigan.  But given the success Clemson has had in recent years cultivating defensive talent, he would be a fool to go anywhere else.

OSU Lineman Not With Team

He looks tough, too tough to be on the Buckeyes’ team. Go Clemson!

He looks like he’s face masking who ever that is that he’s tackling.

Good, you need to recruit more if you want to be better than Clemson.

Helluva lot of good it did you.

So hopefully you won’t suck this year too?

He’s a pro already, why bother with collage.

He would be a great addition to the Clemson team.
247sports has Michigan as a “heavy” favorite to land him. Dabo is a great recruiter and may be able to pull it off.

Glad to have you, Rashan. Come on home.