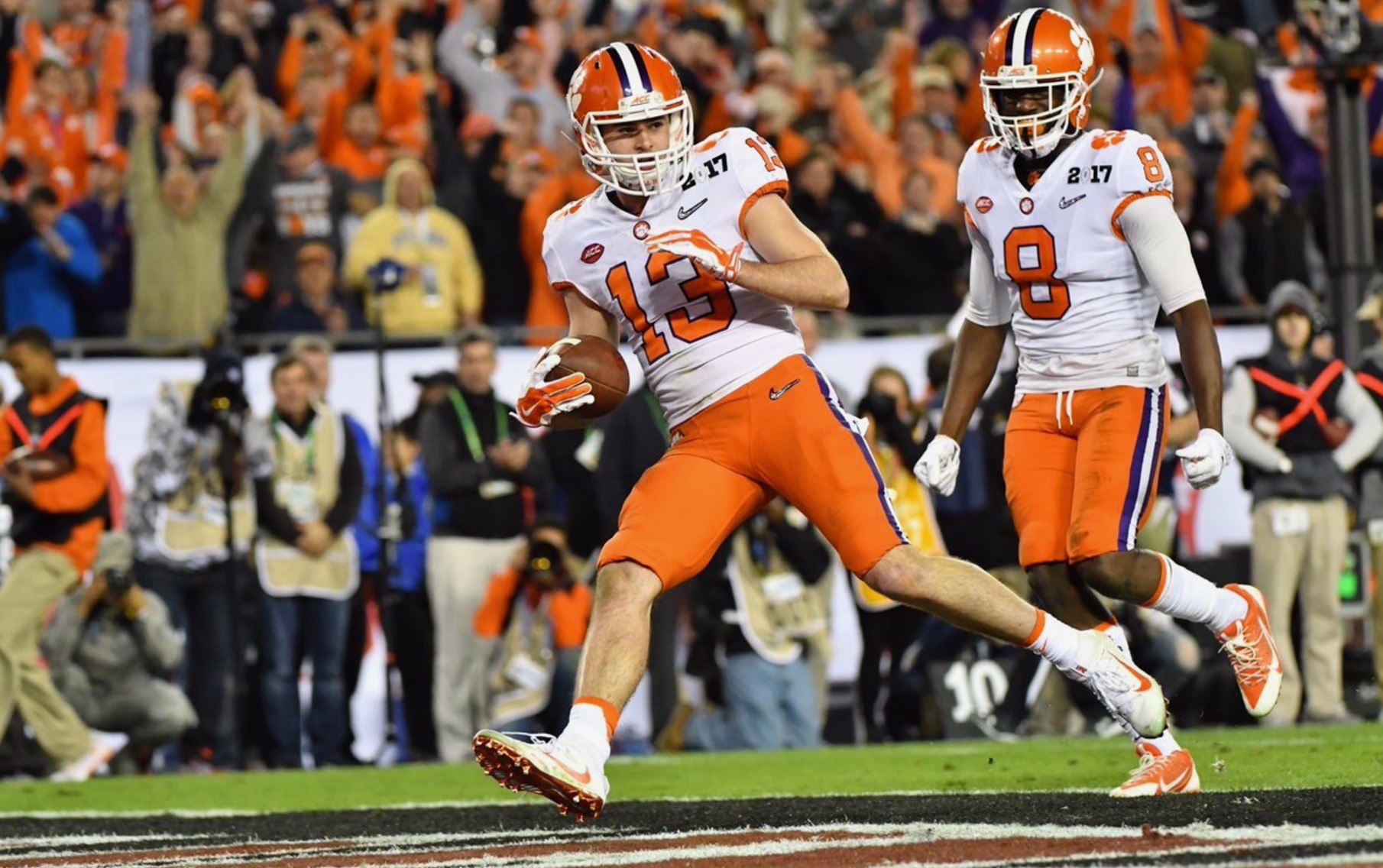 And when we say last second, we mean it …

The controversial score (one of two Tiger touchdowns to come courtesy of a questionable “pick” play) provided Clemson with a 35-31 victory margin in this insta-classic, teeter-totter rematch – producing a final score that wasn’t that far off from this website’s pre-game prediction.

Renfrow – a 5-foot-11, 180-pound slot receiver – caught ten passes for 92 yards and a pair of scores. Not bad for a kid who never got a major college scholarship offer.  Of course Renfrow had a big day on the national stage a year ago, catching seven passes for 88 yards and two scores.

Meanwhile Watson – the college football player we felt deserved the Heisman – turned in the best game of his college career.  Hurried, battered, hounded and harassed all night by Alabama’s No. 1 national defense, Watson hung tough – taking the shots until at long last the mighty Tide ran out of gas down the stretch.

The 6-foot-3, 215-pound junior from Gainesville, Georgia completed 36 of 56 passes for 420 yards and three touchdowns.  He also ran for 43 yards and another score.

He also answered his critics by not throwing a pick – although he did lose one fumble on a bad snap.

That’s okay … after the performance he gave, not much more needed to be said.

As we predicted, Watson benefited tremendously from having future first round NFL draft pick Mike Williams in the offensive lineup.  The 6-foot-3, 225-pound junior – who missed almost all of last season with a broken neck – hauled in eight passes for 94 yards, including a pair of leaping clutch grabs late in the game that sustained critical Clemson drives.

Clemson seemed to have put its stamp on the championship with 4:38 left to play when junior tailback Wayne Gallman rumbled into the end zone from a yard out to put the Tigers up 28-24.

That go-ahead score gave Clemson its first lead of the game.  It also gave the ball back to an Alabama offense that had been stymied on its last three possessions after losing star running back Bo Scarbrough to an ankle injury.

Two plays after converting a critical fourth down, though, freshman quarterback Jalen Hurds broke free for a thirty-yard touchdown scamper with 2:07 left on the clock.  Hurds’ jaunt left Tiger fans nearing a nervous breakdown – and left headline writers searching for the perfect witticism with which to describe what seemed destined to be another soul-crushing Clemson collapse.

Perhaps they would even throw out the infamous #Clemsoning hashtag?

(For the record, we retired that term midway during the 2015 season).

Instead Watson, Renfrow, Williams and the rest of the Tigers gave them something else to write about: Clemson’s first national championship since 1981 and the first-ever loss by Saban’s Tide team in a title game.  In addition to missing out on what would have been an unprecedented fifth title in eight years, Alabama was also denied its shot at becoming the first college football team to finish a season 15-0.

Does that make Clemson the “new Alabama?”  No … not yet.