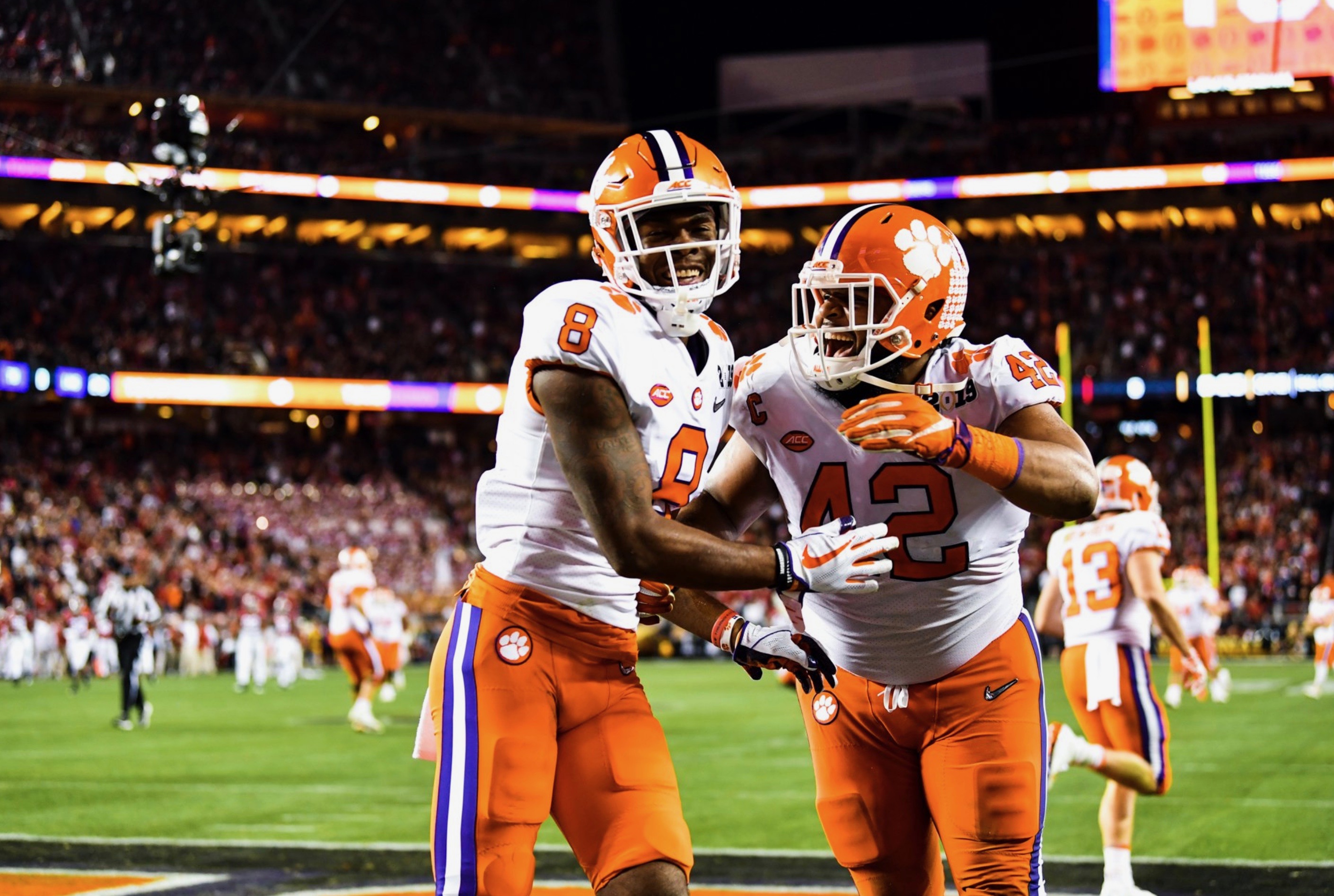 The fourth annual battle of college football’s perennial heavyweights lived up to its advance billing … for the first sixteen minutes, anyway.

With no plans to vacate the premises anytime soon …

“There ain’t never been a 15-0 team!” Swinney told ESPN’s Tom Rinaldi after the game.  “And I know we’re not supposed to be here. We’re just little ol’ Clemson, and I’m not supposed to be here.  But we are, and I am!  And how about them Tigers?  Man, I’m so proud of our guys, these seniors. We beat Notre Dame and Alabama.  We left no doubt, and we walk off this field tonight as the first 15-0 team in college football history.”

“And all the credit, all the glory goes to the good Lord, No. 1, and No. 2, to these young people,” Swinney added.  “When you get a young group of people that believe, are passionate, they love each other, they sacrifice, they’re committed to a single purpose, you better look out.  Great things can happen and that’s what you saw tonight.”

Not only did Clemson demolish Alabama, the Tigers did it without one of their top defensive players – first-team all-American and future NFL first round draft pick Dexter Lawrence.  The 6-foot-4, 350-pound defensive tackle missed his second consecutive game after being suspended by the NCAA last month for testing positive for ostarine, a banned substance.

One of Lawrence’s teammates – senior all-American defensive lineman Christian Wilkins – honored the lineman by marking his face with greasepaint in the form of Lawrence’s uniform number.

“We’re 15-0, we beat the best team ever, nobody’s taking that away from us,” Wilkins said after the game. 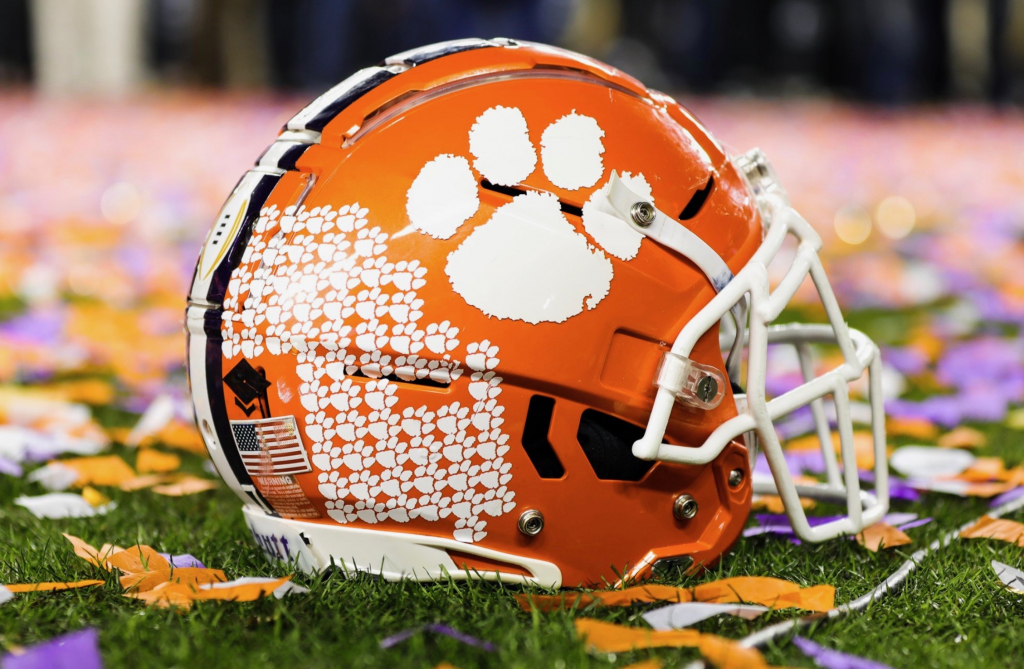 Certainly not Alabama … which surrendered thirty unanswered points to Clemson in the second and third quarters, turning an early shootout into a history-making rout.

Riding the arm of true freshman quarterback Trevor Lawrence, the legs of ACC player of the year Travis Etienne, the hands of wideouts Justyn Ross and Tee Higgins, the muscle of a bruising offensive line led by first team all-American Mitch Hyatt and the stultifying defense of coordinator Brent Venables … Clemson rolled the Tide like no one has done in decades.

Alabama wasn’t just beaten in this game.  It didn’t merely “lose.”  Or get “defeated.”

The Tide was flat out clobbered.  Demolished.  Eviscerated.  Impaled.  Decimated.  And yes … rolled.

The loss was the worst-ever for Alabama head coach Nick Saban, and the worst defeat suffered by the Alabama program in more than twenty years.  In fact, the last time an Alabama team lost by more than 20 points was 2003 – when Saban (then coaching at Louisiana State) laid a 27-3 beatdown on his future team.  It was also a reversal of fortune from the 2018 season, which saw Alabama defeat its opponents by an average of 31 points.

This news outlet’s founding editor predicted a Clemson win – but no one could have predicted the total domination demonstrated by the Tigers on a clear, cloudless night in Santa Clara, a city referred to as “wherever we are in California” by a giddy, God-fearing Swinney after the game.

“There are so many great coaches that are so deserving of a moment like this and never get the chance to experience it,” Swinney told Rinaldi. “And to get to do it once and then to get to do it again, it’s a blessing, and it’s just simply the grace of the good Lord to allow us to experience something like this.”

It was nothing short of a clinic.  And not only did Clemson put it on with everything on the line – the Tigers did it against the No. 1 team in the nation, the defending champions … a program looking for its sixth national championship in ten years.

“It’s embarrassing,” Alabama running back Josh Jacobs told reporter Michael Casagrande of The Birmingham News. “I mean, that’s the only way I can explain it. Embarrassing. Especially when you know it should have been different. I don’t want to speak on it too much.” 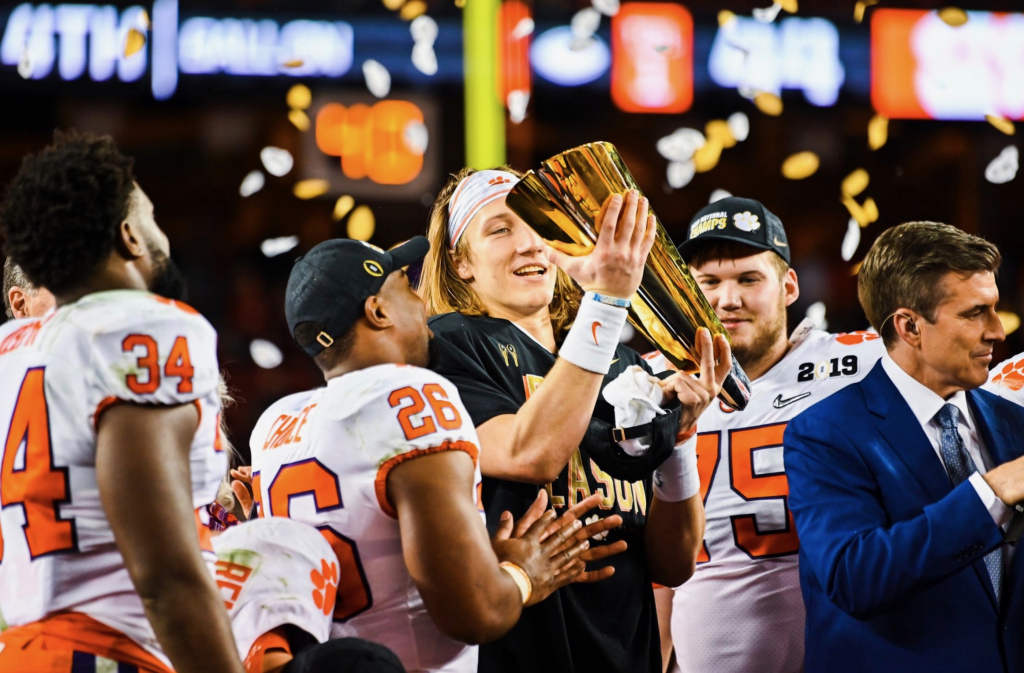 His top target?  Ross, another true freshman.  After setting career highs for receptions and yardage in the national semi-final game against Notre Dame last month, the 6-foot-4, 210-pound wideout from Phenix City, Alabama matched his career high with six catches and set a new career high with 153 receiving yards against the Tide.

Ross got 74 of his receiving yards on a third quarter touchdown that put the game away … and set off a wild celebration 2,000 miles across the country in Clemson, S.C.

This was the fourth straight postseason clash between these two powerhouse programs.  Clemson lost to Alabama in 2015 but conquered the Tide the following year to claim the program’s first national championship since 1981.  Last year, Alabama defeated Clemson 24-7 in the national semi-final round prior to winning its fifth championship since 2009.

They would not score again …

Statistically, the game was closer than the scoreboard would indicate.  Alabama notched 23 first downs (two more than Clemson), enjoyed a three-minute edge in time of possession and amassed 443 total yards (only 39 less than the Tigers).  But two critical turnovers – including a Tua Tagovailoa interception that was returned 44 yards for a score by Clemson’s A.J. Terrell – and an inability to finish drives in the red zone doomed Saban’s team.

Alabama turned the ball over on downs three times against Clemson – twice in the red zone and once on a botched fake field goal attempt.  Tagovailoa – the Heisman Trophy runner-up – finished 22 of 34 for 295 yards with two touchdowns and two interceptions, including the costly pick-six.

USC: Vanderbilt Game Is A Sellout