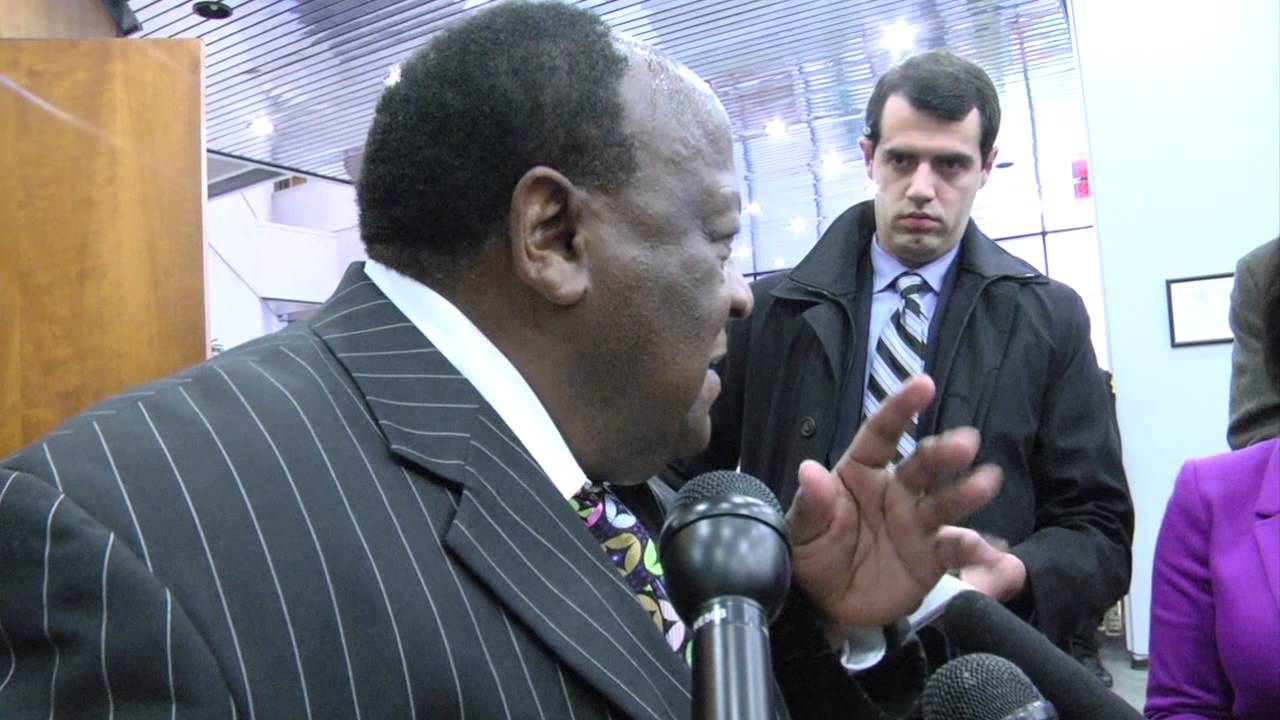 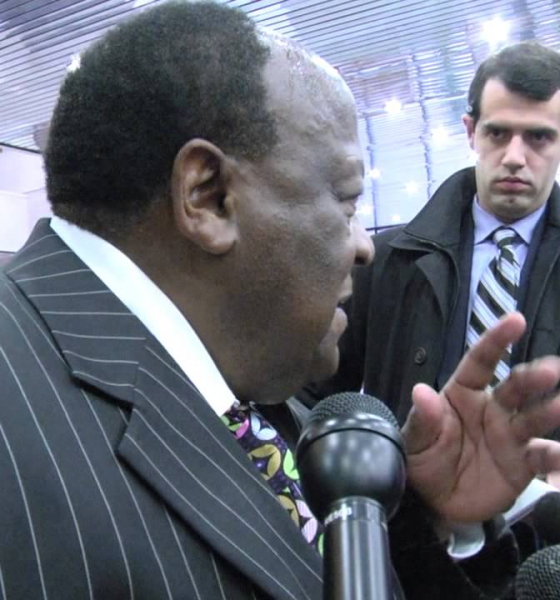 A legitimate point from a disgraced public official?

Former South Carolina state senator Robert Ford – driven out of office six years ago over a bizarre ethics scandal that included campaign purchases made at an adult book store – is making headlines this week for a Christmas message in which he implores recipients to imagine a world in which he was white.

And for once … Ford may have a point.

Ford sent Christmas cards to multiple recipients this week which contained a lengthy “look back” insert recapping his efforts to help secure funding for the Arthur Ravenel Jr. bridge – the now-iconic, 1,546-foot cable-stayed bridge that spans the Cooper River between Charleston and Mount Pleasant, S.C.

The insert concluded with a curious racial reference …

“One problem that I have been dealing with on a personal basis, if I was a white elected official, who was able to get the winning vote behind a billion dollar bridge, how would I be recognized?” Ford wrote.  “Especially if I was anyone other than Robert Ford?  These questions have been on my mind ever since the bridge vote took place.” 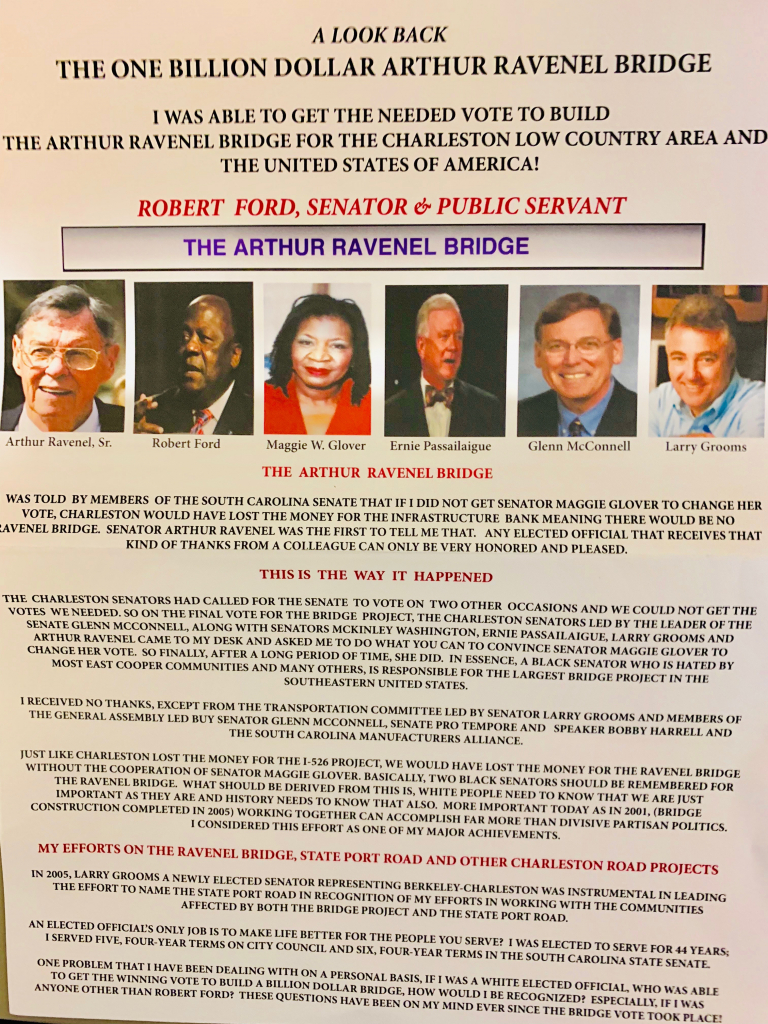 This news outlet typically eschews such “identity politics” nonsense.  Just yesterday, in fact, we were spleen-venting against excessive political correctness … which we maintain is unnecessarily dividing our nation along a host of fault lines.

Why lend any credence to it in this case, then?

Because when it comes to Ford, there is some relevant history … believe it or not.

Ford’s missive – a shamelessly self-serving revisionist narrative masquerading as a holiday greeting – is prima facie ridiculous in almost every way imaginable, but there is a small kernel of credibility to it because of the double standard that was applied to him during his final days in office.

For years, Ford enjoyed a curiously symbiotic relationship with powerful former Republican Senate leader Glenn McConnell.  They watched out for each other and provided political cover to one another when necessary – which is bizarre considering McConnell’s well documented neo-Confederate leanings.

When McConnell left the Senate in 2011 – the first in a series of rapid-fire career moves on his part – Ford became vulnerable.  And make no mistake: He gave his rivals all the rope they needed for the so-called “public lynching” that followed (that was Ford’s term for the ethics trial that resulted in his resignation from office in 2013).

But Ford maintained all along that his ethical misdeeds paled in comparison to those perpetrated by many Republicans – mostly white Republicans – who served alongside him in the legislature.  He was absolutely right, too, as evidenced by the whitewash of charges against former representative/ governor Nikki Haley and the onset of the #ProbeGate investigation into corruption in state government – which continues making headlines to this day (although not good headlines).

The contrast in consequences for Ford and these other corrupt lawmakers/ special interests provided us with yet another compelling indictment of the S.C. General Assembly’s notorious self-policing “ethics” committees … which we routinely mocked as “cover-up” committees.

Obviously, Ford’s political career is over.  After resigning in 2013, he was decisively defeated by Marlon Kimpson – the attorney who won a special election to fill Ford’s unexpired term representing S.C. Senate District 42 (map).  Kimpson trounced Ford by a nearly 4-to-1 margin in their head-to-head race in the 2016 Democratic primary.

He may continue to try, but Ford isn’t coming back from a defeat like that … nor is he ever likely to receive the recognition he so zealously covets related to the Ravenel bridge (from the looks of it, no amount of recognition on any issue would satisfy him).

Still, when it comes to his underlying argument – that he was the victim of a double standard perpetrated by corrupt, mostly white Republicans who did far worse in office than he ever did – Ford is indisputably correct.  He is also correct in assuming that were he a white Republican, his ethical misdeeds would have probably been glossed over or completely ignored … one of the rare instances in which this news outlet affirms such a race-based allegation.

That may not be the legacy Ford is searching for, but that doesn’t mean it isn’t an important one – especially as legislators attempt to (once again) address the issue of ethics reform in the aftermath of #ProbeGate.