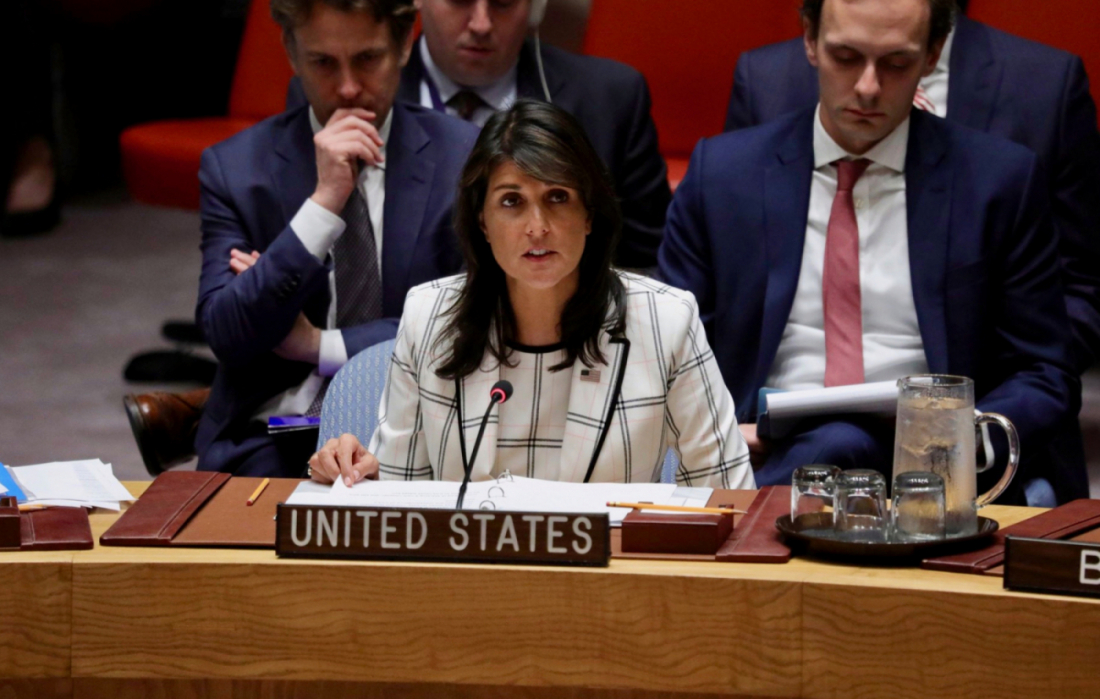 After a high-profile dust-up in late April with her boss – U.S. president Donald Trump – Haley has been largely relegated to the back bench in advancing America’s increasingly erratic foreign policy.

This has led to many to discount the political future of the 29th American ambassador to the United States.  Not Democratic pollster Celinda Lake, though.  According to Lake, Haley remains viable as a presidential contender.

“We will see women presidents in the next decade, and the first one may very well be a Republican actually,” Lake recently told Hill.TV’s Joe Concha.

Despite this news site’s, um, “history” with the ambassador … we don’t disagree with Lake’s assessment.

While it seems clear Haley has been dialed down (again) as a member of Trump’s cabinet, down is not out.  And while the 46-year-old diplomat has been eclipsed/ shelved by Trump in recent months … writing her off as a 2020 presidential contender would be a huge mistake.

Haley still has tremendous neoconservative (a.k.a. warmonger) support.  Look no further than the recent fawning coverage she received from The Daily Signal – the mouthpiece of the Heritage Foundation (among Washington, D.C.’s staunchest advocates for American militarism and global intervention).

“Yesterday, I had the honor of welcoming Ambassador Nikki Haley to The Heritage Foundation,” the organization’s president Kay Cole Jones wrote.  “And as she spoke before a packed audience, I realized we were witnessing a true profile in courage.  Ambassador Haley’s principles and tenacity have served her well all her life, first as a young businesswoman, then as South Carolina’s first Indian-American legislator, and later as the Palmetto State’s first female and minority governor.”

Jones went on to praise Haley for standing “firm for freedom-loving people in the face of despotic regimes” and for how she has handled “the abuse she has endured for pulling the U.S. out of the U.N. Human Rights Council.”

(We supported that move, incidentally).

In other words like most neocons, Jones is “all in” for Haley.  And we suspect the wealthy donors who subsidize her group (and warmongering politicians like U.S. senators John McCain and Lindsey Graham) will be “all in” for her, too.

If they get the chance …

As of this writing, Trump is riding high (at least within his own party).  His approval rating among “Republican” voters is monolithic, and the U.S. economy seems to be experiencing a modest uptick during the first half of 2018 – a trajectory that will ultimately determine his political future.  If positive economic trends continue into 2019, Trump will be unbeatable in the GOP primary.  If they continue into 2020, he will be unbeatable period.

Does that mean we should expect to see a white flag of surrender from the GOP establishment (which pulled out all the stops to defeat Trump and tried to sabotage his early presidency)?

Of course not … they will always have their knives out for him.  Which is why we believe a contested GOP primary for Trump is a given no matter what the economy does.  But a “sustained growth” scenario would mean high-profile potential challengers like Haley would be far more likely to play the long game and refrain from running – or engaging in open warfare against a popular (again, within his own party) president.

Now … assuming the economy slips into another recession sometime in 2019 (as many forecasters are predicting), all bets are off.

Assuming that happens, Trump would likely see his GOP support erode … at which point it is an absolute certainty that we would see a top tier candidate like Haley come to the fore.

This news site could never support Haley in light of her performance as governor of our home state (or for that matter in light of her performance as a warmonger puppet at the UN), but Trump’s repeated failure to rein in wasteful spending in Washington, D.C. (here and here) – and his surrender to the GOP establishment on tax relief – has moved us squarely into the “undecided” column as the 2020 election begins to take shape.

More importantly, it has also made the sustainability of his “recovery” that much more difficult …