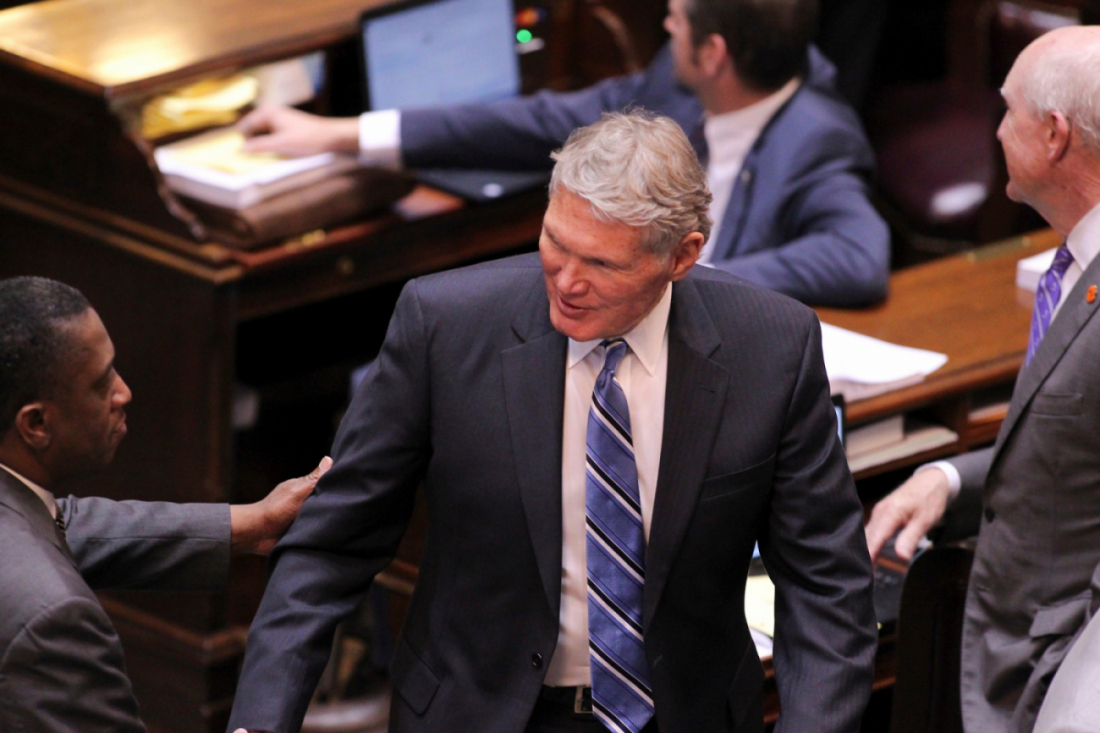 That’s the motto of former South Carolina Senate “majority” leader Harvey Peeler, a status quo “Republican” from Cherokee County who has a reputation as a no-holds-barred brawler in the barroom (something to which the founding editor of this news site can personally attest).

If only Peeler had the same “sense of urgency” when it came to reforming the Palmetto State’s hopelessly broken, corrupt and costly state government …

Unfortunately, he doesn’t.  Sure there’s plenty of “talky talky.”  But we are looking for the “walky walky,” Senator.

And when it comes to a commitment to fixing what’s fundamentally wrong with South Carolina, Peeler is once again pulling up lame.

Nonetheless, the veteran lawmaker holds forth in this week’s editions of The (Spartanburg, S.C.) Herald-Journal, arguing that the key to reducing soaring tuition costs at our increasingly liberal government-run colleges and universities is to … wait for it … funnel more students into the state’s technical college system.

Umm … you mean this system?

“We have to make sure we’re taking full advantage of our technical education system in South Carolina, which is a big selling point for business and industry to locate in our state,” Peeler wrote for the Herald.  “Our tech schools ought to be thought of as a first option, rather than a fallback, for more students.”

We agree … as long as taxpayers are not subsidizing those schools (or guaranteeing student loans).

But that’s not what Peeler is saying.  He wants to preserve the current (failed) government-run system … just route more students into technical college than liberal arts colleges.

That might wind up being a bit cheaper, but it is still preserving a structure in which government controls (and taxpayers subsidize) higher education.

In fact, Peeler also seems to justify more spending by claiming that colleges and universities in the Palmetto State have been shortchanged in the state budget in recent years.

“It’s true that the General Assembly is still catching up on funding for higher ed caused by the last economic downturn,” he wrote.

Listen: The notion that spending on higher education must escalate in perpetuity on the backs of either taxpayers or students/ their parents a false dichotomy.  It’s not an “either/ or” proposition.  In fact, we don’t have to escalate this spending at all.  Why not?  Because as we have said ad nauseam – higher education is not a core function of government.

Instead, it is a multi-billion dollar business … one that needs to be set free to pursue its own destiny (before its unsustainable business model implodes).

To his credit, Peeler does land one or two punches against the corrupt higher educrats in the Palmetto State – criticizing them for embarking on unnecessary building projects and devoting too many scholarships to out-of-state students.

“You don’t have to walk far to see something new being built, and license plates from more and more far-off places,” he writes of South Carolina’s college campuses.  “I’ve grown more concerned that the boards at our colleges and universities and their nearly unlimited power to raise tuition has created a situation where some have lost sight of our system’s core mission to educate South Carolinians first rather than build shiny new dorms for kids from Ohio and New Jersey.”

Of course, Peeler quickly backtracks by saying “if they need more money, I’ll fight to fund them.”

In other words “pay no attention to my previous rhetoric …”

“Each university and college acting on its own clearly isn’t working,” he wrote.

The truth is we want each university and college acting on its own … we just don’t want taxpayers paying for them (or assuming responsibility for the loans that subsidize their operations).

Make no mistake: We staunchly support the activist role the currently composed S.C. Commission on Higher Education (SCCHE) is playing in alerting the public to myriad of problems within our state’s bloated, duplicative and mismanaged higher education bureaucracy.  Commission chairman Tim Hofferth and interim director Jeff Schilz are doing a terrific job sounding the alarm on these matters – but equipping this agency with additional authority is a short-term fix that doesn’t address the root problem.

We have no problem giving them that authority, but again … it is a half-measure.

We’ve said it before, we’ll say it again: Higher education must be immediately and permanently privatized.  No more government appropriations, period.  Furthermore, student loans in this country must be issued based on what the market determines to be an acceptable level of risk, not a federal guarantee.

As for Peeler and his fellow “Republican” politicians, we would encourage them to either embrace real reform … or help themselves to a nice, full glass of STFU.