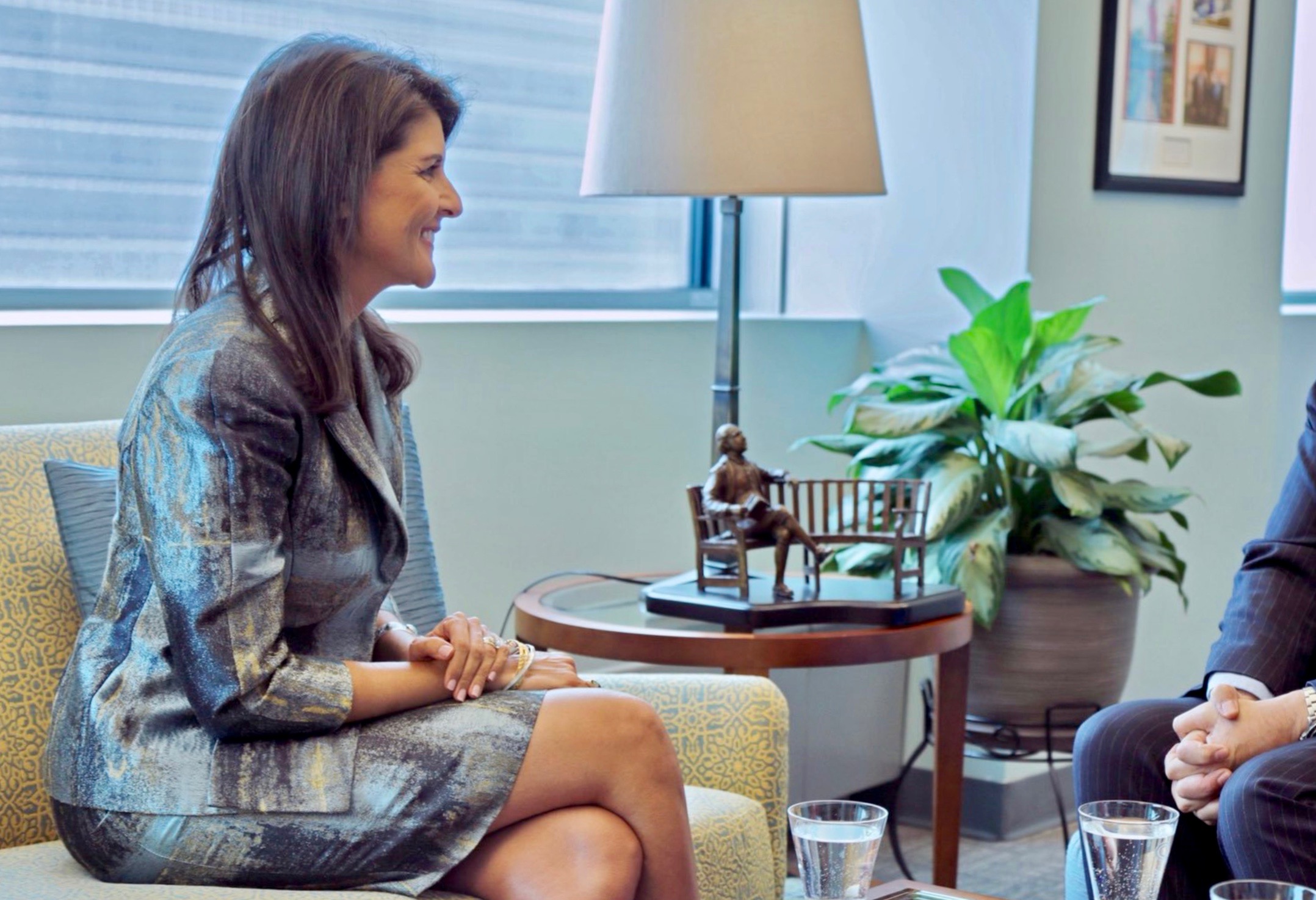 Spoiler alert: It’s mostly positive.  And what little animus there is for Haley among the Jewish population seems exclusively attributable to her affiliation with U.S. president Donald Trump (the guy who appointed her to the job as a favor to Henry McMaster, his top establishment supporter in the state of South Carolina).

That may not be a problem for Haley much longer, though …

Multiple sources at the White House tell us the former South Carolina governor is “actively trying to get fired” from her current job with Trump – a move that would make her a martyr for neoconservatives (a.k.a. warmongers) and would enable her to jumpstart her 2020 presidential candidacy.

Haley has insisted her relationship with Trump is “perfect,” although a high-profile spat over sanctions with Russia last month revealed the extent to which she is ignoring the choke collar Trump had her fitted for last spring.

What happened?  Well, after neocons inveighed upon Trump to sign their bloated budget – and then got him to escalate their proxy war in Syria – Haley sought to ramp things up a notch by poking the Russian bear once again.

“You will see that Russian sanctions will be coming down,” Haley said in the aftermath of America’s attack on Syria, indicating that the U.S. Treasury Department was preparing to announce those new economic measures within twenty-four hours.

Trump’s top economic advisor, Larry Kudlow, told reporters Haley “got ahead of the curve” with her Russian rhetoric.

“She’s a very effective ambassador, but there might have been some momentary confusion about that,” Kudlow said.

That’s when Haley fired a shot heard ’round the Beltway – a statement delivered to neocon central Fox News in which she bluntly stated “with all due respect, I don’t get confused.”

Kudlow appeared to back down – calling Haley personally to apologize and then placing a call to The New York Times in which he publicly apologized and walked back his prior remarks.

“She was certainly not confused,” Kudlow told the paper.

Kudlow added that Haley “was basically following what she thought was policy” but that “the policy was changed and she wasn’t told about it, so she was in a box.”

According to our sources, the administration’s plan was to leverage the threat of sanctions in its negotiations with Russia.  When Haley announced the sanctions as a done deal, the threat (and the leverage) evaporated.

“She wasn’t confused – she was attempting to present the president with a fait accompli,” one White House source told us.

We’re also told Haley “fully expected” to lose her job over the Russian intrigue – the latest flare-up between her and the administration.

“She doesn’t care if she gets fired,” the source added. “She is actively trying to get fired.”

And while Trump clearly isn’t rising to the bait (yet), that doesn’t mean he isn’t fighting back.  Last month, he personally intervened to block the hiring of Haley’s top strategist – #NeverTrumper Jon Lerner – by U.S. vice president Mike Pence.

Lerner is Haley’s deputy ambassador and the architect of her rise to national prominence.  He’s also the likely source of her strategic jabs at Trump – many of which have incensed the Oval Office occupant.

Last December, Trump was livid with his ambassador when she went on national television to argue that several women who have accused him of sexual harassment “should be heard.”

Just last week, he was reportedly furious over Haley’s comments regarding his so-called “indefensible” communications style – as well as her statement that the White House should not intervene to shut down special counsel Robert Mueller’s investigation into alleged Russian meddling in the 2016 presidential election.

Haley did urge Mueller to wrap his probe up soon, however.

So … where is all of this going?  Good question.  Clearly Trump isn’t eager to fire Haley – who is by far and away the most popular member of his cabinet.  That puts her at a decided advantage in terms of planning her exit from the administration.

Haley’s national ambitions are no secret … nor is it any real secret who is supporting her.

The only question now?  When will she make her move?