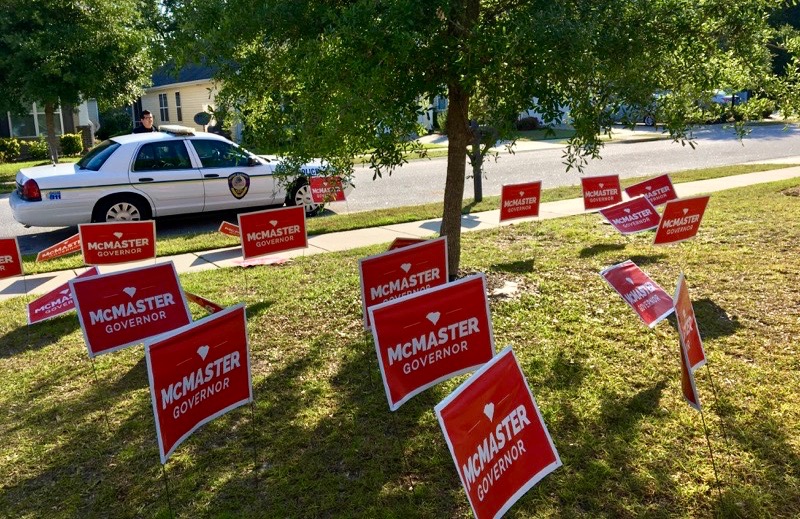 South Carolina “Republican” governor Henry McMaster has run an absolutely atrocious 2018 campaign  … which is probably one reason why the fiscally liberal incumbent is having to run negative ads against his top GOP rival, Lowcountry labor attorney Catherine Templeton.

Despite being gifted the governor’s mansion last January by U.S. president Donald Trump – and despite Trump staking him to some serious campaign cash during a presidential fundraiser last fall – McMaster continues coughing up the ball at every turn.

As a result, this one-time electoral “lock” finds himself in the fight of his political life against Templeton, Upstate businessman John Warren and lieutenant governor Kevin Bryant.

And the desperation is showing …

The latest evidence?  Juvenile shenanigans involving campaign signs … which are beginning to pop up along roadways and on lawns across the Palmetto State in anticipation of the state’s partisan primary elections next month.

Perhaps not surprisingly, Templeton signs are being targeted for removal by her political opponents (ahem).

“We’re seeing a disturbing pattern (of) Catherine’s signs being defaced, vandalized and removed,” a Templeton campaign spokesman told us this week.  “We know sign shenanigans happen in every election but this is clearly shaping up to be something worse than usual.”

Worse than usual or not … sign hijinks are a fact of life in campaigning.

Do they impact the outcome of races?  No … especially not in statewide elections involving multiple candidates (most of whom are advertising across a diverse array of media).

So … why are we writing about campaign signs?

Scott, 18, is a member of the class of 2018 at Wando High School in Mount Pleasant, S.C.   In fact, she’s actually the president of her senior class.  Scott is also an active volunteer on the Templeton campaign – and has made no secret of the fact she’s supporting the former two-time appointee of ex-governor Nikki Haley.

Apparently Scott’s support for Templeton rubbed someone the wrong way.  Like really wrong.

So wrong, in fact, that when Scott returned to her family’s home shortly before midnight after babysitting she found her yard blanketed with nearly three dozen McMaster for governor signs. 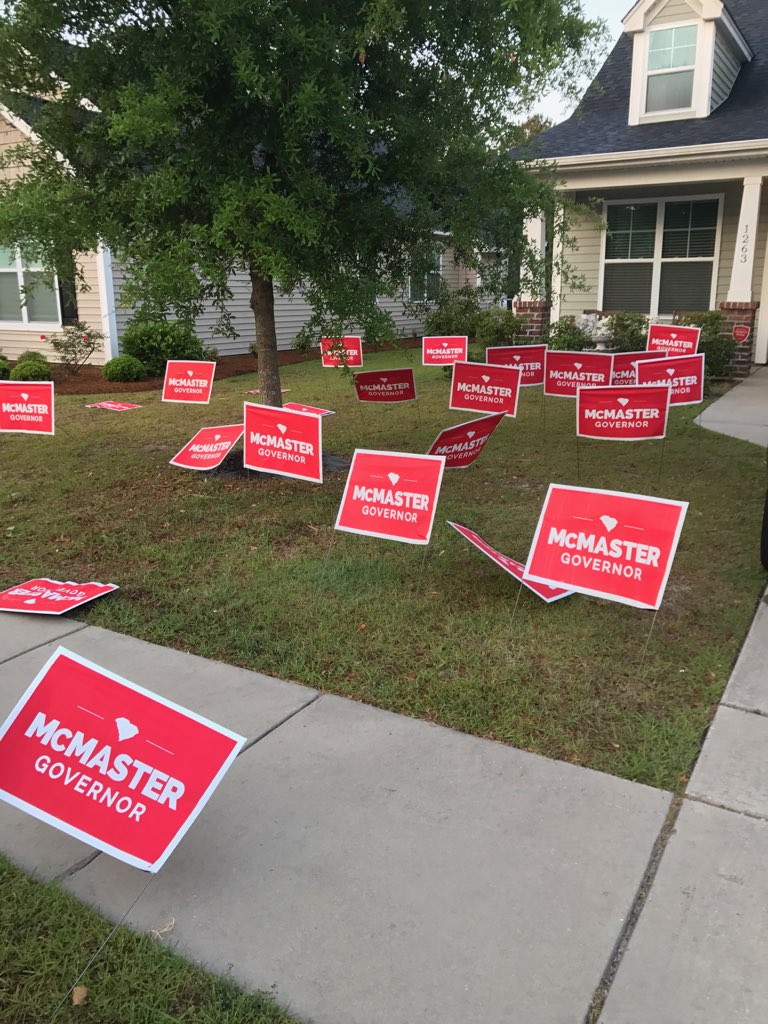 “Last night I learned that somebody who hates Catherine Templeton found out where I lived,” Scott wrote on her Facebook page.  “While my mom and my younger siblings were home late last night, they trashed my yard with the signs of another candidate.”

“How creepy is the McMaster campaign!” one of Scott’s friends wrote in response to her post.

“At first I was scared, because I didn’t know who had placed them throughout my yard or what their intentions were,” Scott continued.

Concerned that someone had trespassed on her family’s property in the middle of the night, Scott filed an incident report with the town of Mount Pleasant, S.C. police department.

Her fear quickly turned to determination, however.

“If anything, the past fifteen hours have taught me grace,” she wrote.  “How lucky am I to be so passionate about a campaign that people saw it necessary to do something like this to my family?  It shows that we’re doing something right.  Team Templeton is moving forward at a momentum where some people found it necessary to attack a high schooler in order to try and slow us down.” 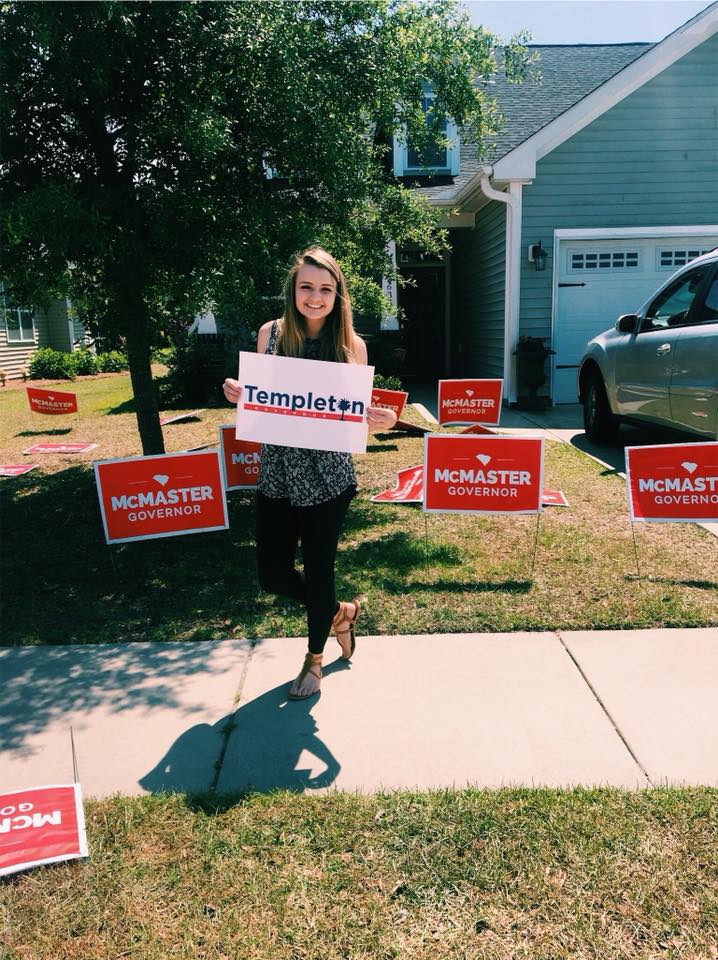 “I plan on doing everything I can to get someone as kind and honorable as Catherine into office,” Scott continued.  “I am so proud of this campaign, and I am so so excited to continue showing my support with my head higher and my heart stronger.”

“We should be encouraging young folks to get involved in Republican politics! Just like yourself!” McCoy wrote in response to Scott’s Facebook post.  “Keep your head held high and stay strong in your convictions. So sorry this happened to you!”

“Henry McMaster goes negative, and in less than 24 hours someone tries to intimidate an 18 year-old high school intern working for Catherine Templeton’s campaign,” Templeton spokesman R.J. May III said.  “They defaced her yard in the middle of the night with over thirty-five McMaster signs.  It’s disgusting.  Say what you want about Catherine – or put the signs in my yard – but don’t target teenage interns.  No matter who’s responsible, this act of cowardice has strengthened our intern’s resolve to help Catherine Templeton take a buzzsaw to the corrupt good old boy network in Columbia and lead a conservative revolution that shrinks government.”

McMaster’s campaign needs to find out who trespassed on Scott’s property … and can them immediately.  The governor should also issue an apology to Scott and her family on behalf of whoever pulled such a creeptastic stunt.

Will he?  Honestly, we wouldn’t be surprised if he did …

McMaster may be a doddering boob (and totally out of his depth as governor), but we’ve never known him to be unchivalrous.