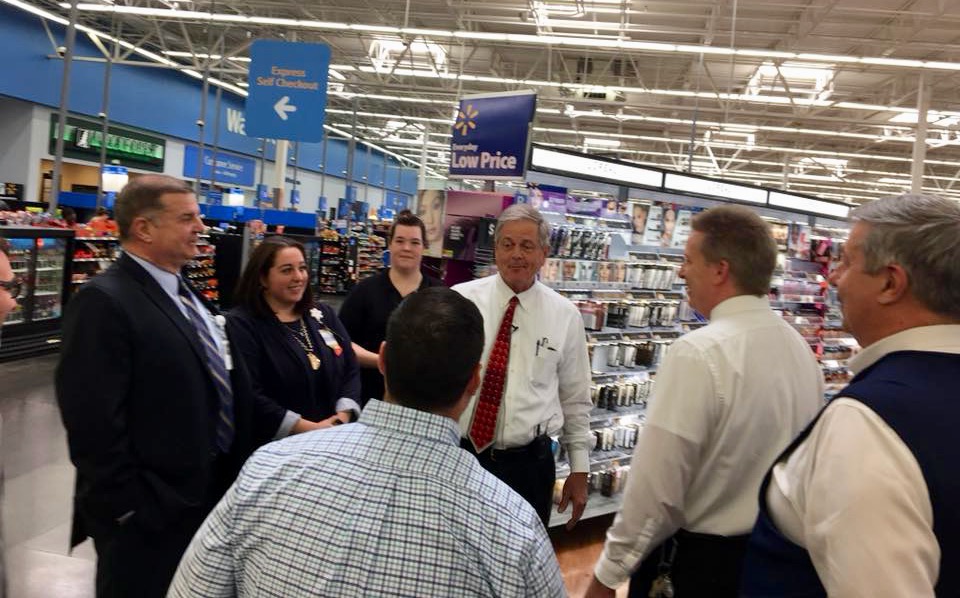 Liberals are all about grabbing guns … but they failed to take advantage of a golden opportunity to grab one earlier this week in the Palmetto State.

U.S. congressman Ralph Norman of South Carolina pulled out a loaded weapon during a meeting with constituents (including several anti-gun activists) on Friday morning – and left it sitting on the table of a local diner for several minutes.

Not only that, he says he plans on doing so again … even though Democrats are pushing for criminal charges to be filed against the first-term lawmaker.

Norman, who has a concealed weapons permit, said his .38 caliber Smith and Wesson handgun was displayed for roughly 1-2 minutes in an effort to prove a political point.

“If someone walks into this restaurant shooting, I’m going to shoot him,” Norman said. “I’m going to protect you and everybody else in here.”

We agree with that basic premise …

We don’t know whether Norman is a fast draw or a deadeye shot – nor are we convinced he chose the best method of making his point – but there’s no doubt in our minds that guns in the hands of citizens constitute a vital deterrent to mass shootings.  As we noted recently “removing guns from the hands of law-abiding citizens is not going to make our society safer.  All it’s going to do is empower those seeking to kill innocents – expanding their list of potential targets and escalating the body count when they do decide to strike.”

That’s why we oppose gun-free zones – and other efforts to disarm the populace or limit their Second Amendment rights.

As we wrote back in October of 2016, “gun-free zones represent an open invitation for evil and/ or unstable people to inflict maximum carnage on unsuspecting citizens – making them the worst response imaginable to (mass) shootings.”

“Seriously, who believes that the best way to respond to a (mass) shooting is by creating more favorable conditions for future violence?” we asked.  “While simultaneously increasing the likelihood that future attacks become more deadly?

Noble has previously assailed his top rival for the Democratic nomination, veteran state lawmaker and Afghan War veteran James Smith, for supporting the Second Amendment.  Not surprisingly, he lit into Norman in the aftermath of this incident.

“Let’s be clear on what happened today: Ralph Norman pulled out a loaded gun, waved it around in a crowd of strangers, and then started ranting about former Congresswoman Gabby Giffords who was shot in the head in 2011 at a similar event,” Noble said.  “The fact is, if he didn’t have the word ‘Congressman’ in front of his name, he’d be undergoing a mandatory, 24-hour psych evaluation right now – and, frankly, that’s exactly where he belongs.”

“You pull out a gun when you are prepared and need to use it – not for a stunt,” Kelley tweeted.

Liberal “Republican” U.S. Senator Jeff Flake also slammed Norman, tweeting “I sincerely hope you never have to experience what my friend Gabby Giffords experienced. But to suggest that she might have avoided being shot had she carried a weapon as she spoke to constituents that morning is inappropriate and inconsiderate.”

Trav Robertson, the chairman of the South Carolina Democratic Party (SCDP), took it a step further – arguing that Norman should be prosecuted for his action.  In fact, Robertson said he would be filing an “official request” with the S.C. State Law Enforcement Division (SLED) to launch an investigation into the incident.

“As any truly responsible gun owner knows and as the statute says, if you have a concealed carry permit, you cannot brandish your weapon without an imminent threat,” Robertson said.  “It’s dangerous and it’s illegal.  And today Congressman Norman showed us that he’s anything but responsible.  This is a felony offense and punishable by up to five years in prison.  That’s why I will be sending an official request to SLED to investigate Congressman Norman’s dangerous actions.”

A SLED spokesperson told us the agency had not yet received a request to investigate Norman, but that it would “consider” launching such an inquiry if a request was made.

While we have no beef with what Norman did, it would certainly appear as though the law is on the side of the liberals on this one.

In other words, this could get interesting …

Democrats are hoping another wave will bring this seat – and South Carolina’s first congressional district – back to them.

Parnell hopes to challenge Norman again in 2018, but first he will have to beat this clown (no really, one of the other Democrats running in the race is an actual clown).

As for Norman, despite an incredibly close 2017 GOP special election primary he went unchallenged this year for his party’s nomination.

A Dam Shame: Fort Jackson Finds Itself In Hot Water