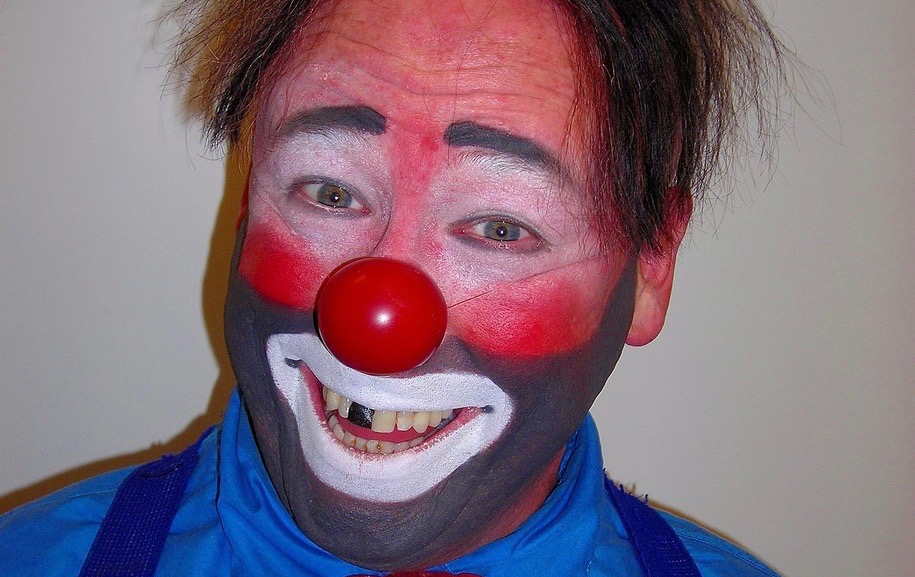 Not long ago we referred to a certain “Republican” primary election in South Carolina as a “clown car.”  Little did we know at the time there is an actual clown running for the U.S. congress in the Palmetto State

His name is Steve Lough, and he’s a native of Camden, S.C. – a town of roughly 7,000 people located roughly thirty miles northeast of the state capital of Columbia.  A staunchly progressive Democrat, Lough volunteered on the campaigns of former U.S. president Barack Obama in 2008 and 2012 and initially supported Hillary Clinton in 2016 before switching over to independent socialist Bernie Sanders.

In other words, he’s one of the Democrats who wound up on the losing end of the real “rigged election.”  Now he wants to flip the script on the party’s more conservative wing by pulling an upset in the Democratic primary for the state’s fifth congressional district (map).

“I volunteered for the Obama campaign in ‘08 and ‘12…Hillary for most of ‘16…but I really found my heart in listening to Bernie talk about single payer healthcare,” Lough wrote in a letter last month to the uber-liberal website Daily Kos.  “My wife is Japanese (she also was a clown for Ringling Bros. Circus…she wore a kimono costume and folded a giant paper crane at intermission) and her father could not believe that the USA is so far behind in healthcare. He feels sorry for us as a nation. So that’s one reason why I’m running.”

Lough says he’s also running “because of what happened at Sandy Hook Elementary School,” which means he’s another gun grabber.

Anyway, we can’t hate on him too much because, well … look …

Posted by Steve Lough for Congress on Saturday, March 10, 2018

Whatever the guy believes, that’s awesome!

Democrats are hoping another wave will bring this seat back to them, but the party establishment has already rallied around “centrist” Democrat Archie Parnell – who turned in a better-than-expected showing in a special election last June.  Parnell still lost to “Republican” Ralph Norman, but Democrats believe he has a real chance to “flip the fifth” in 2018.  Lough isn’t on board with the party establishment, though.  And while he seems friendly enough in his juggling clips, he’s got a razor sharp tongue when it comes to his rival.

Here’s an excerpt from his Daily Kos letter …

When I decided to move back home to Camden, SC, I Googled the 5th District…Ralph Norman, the Republican incumbent, is a real estate millionaire who took over his daddy’s business…the Democrat is Archie Parnell, a millionaire tax attorney who worked for Goldman Sachs in Hong Kong for 20 years and Exxon for 10 years…people say his ads are great! He gets a tattoo, he makes snow angels, he parodies House of Cards! Genius! He lost twice. I say the ads are cruel and sad and show he is completely out of touch. People need healthcare. People need a living wage. Gun violence is destroying our society. And this guy is making snow angels…Pathetic.

Damn … tell us how you really feel, clown!

“If old Ralph and Archie aren’t afraid of clowns now, they will be shortly!” Lough added in his letter.

This news site has written repeatedly about deep Democratic divisions at the national and state level.  Clearly those divisions will be on display in this race.

Obviously, that’s good news for the GOP.  Of all the “Republican” congressional districts in the Palmetto State, this one is the most poachable for South Carolina’s perpetual minority party.  Norman’s narrow win in a contentious 2017 GOP special election – and his worse-than-expected showing against Parnell last June – have created an opening for Democrats.

Unfortunately, it seems they are choosing to clown around instead …

Of course in Lough’s defense, it seems pretty evident to us that his views are more consistent with those of the Democratic base than Parnell’s (here and here).

Got something you’d like to say in response to one of our stories? Please feel free to submit your own guest column or letter to the editor via-email HERE. Got a tip for us? CLICK HERE. Got a technical question or a glitch to report? CLICK HERE. Want to support what we’re doing? SUBSCRIBE HERE.
Banner: Daily Kos