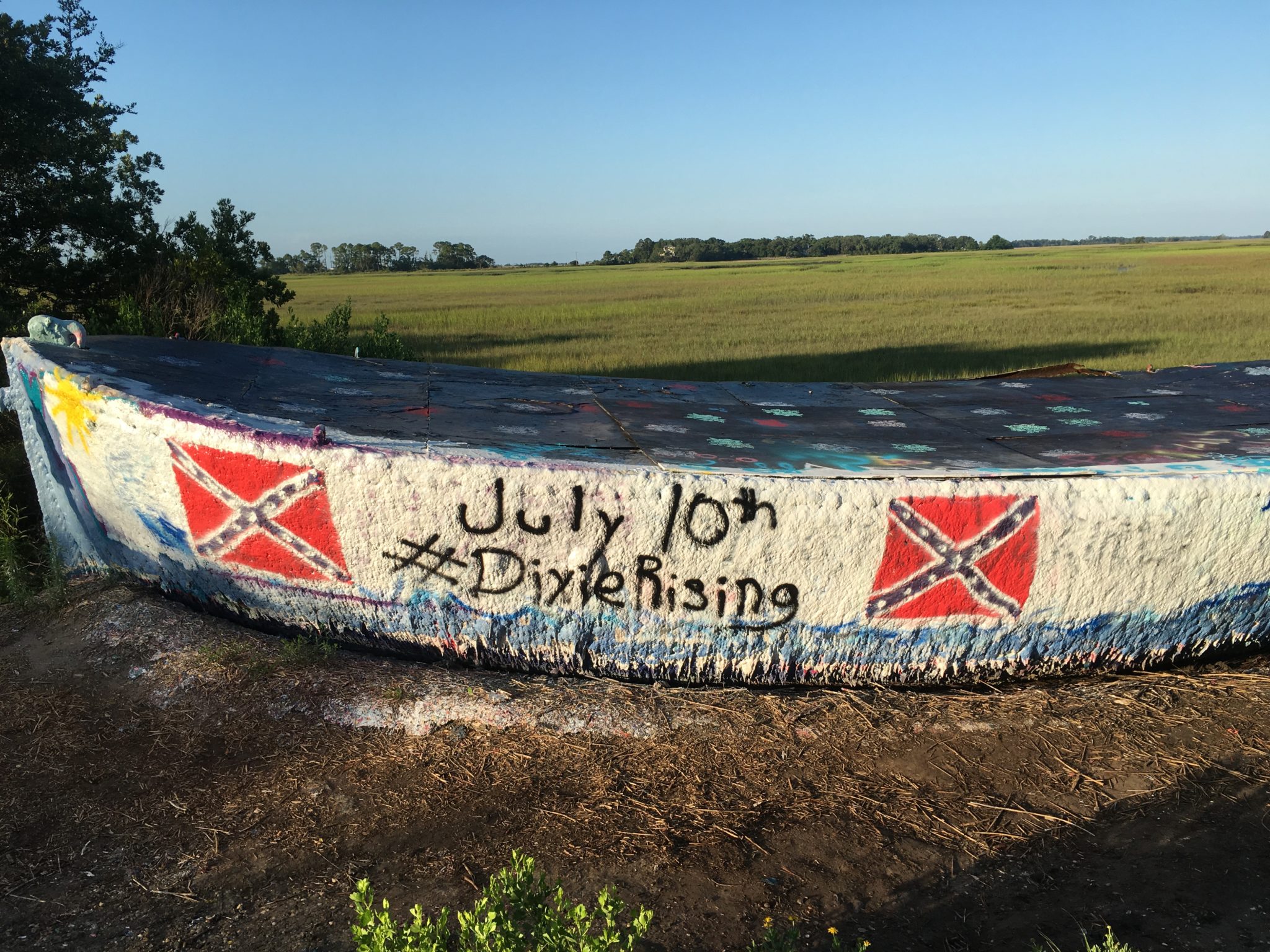 In anticipation of an upcoming flag-raising ceremony at the South Carolina State House next month, members of the S.C. Secessionist Party have painted the Confederate flag on a prominent Lowcountry landmark.

Well, two flags were painted … along with the date of the group’s upcoming event (July 10) and a nifty social media hashtag, #DixieRising.

Secessionist party members thusly festooned the “Folly Boat,” a vessel that came to rest amidst the oleander bushes off of Folly Road during Hurricane Hugo way back in 1989.  The boat – which was never claimed in the aftermath of the storm – now permanently resides along a highly visible stretch of highway bordering a salt marsh.

For nearly three decades, passersby have painted messages and murals on the hull of the boat – most of them memorials, wedding announcements or advertisements for local festivals.  Over that time, she’s gone through multiple clean-up jobs as layers of paint occasionally became so thick they were sagging off of her sides.

“As the unofficial ambassador to Folly Beach it reminds each of its passersby of the funky, feel good vibes of the Folly Beach community,” the boat’s official website noted.

For the moment, though, the Folly Boat is reminding them of the second anniversary of the lowering of the Confederate flag from the grounds of the S.C. State House – and efforts by the Secessionist Party to call out the “spineless politicians” who took it down.

The flag flew on the State House’s north lawn for fifteen years prior to its removal on July 10, 2015 following a racially motivated mass murder in Charleston, S.C.  Prior to that, it flew from the dome of the State House from 1961-2000.

Members of the Secessionist party opposed the flag’s removal – and believe lawmakers lied to them when they vowed to display the banner at a government-run museum in Columbia, S.C.

By way of response, they have engaged in a highly visible “flagging” campaign – of which the Folly Boat painting would appear to be the latest iteration.

In addition to its “flagging” efforts, the Secessionist Party has also led efforts to enforce the state’s “Heritage Act.”  That law forbids the removal of any Confederate (or civil rights) “monument, marker, memorial, school, or street” without a two-thirds vote of both chambers of the S.C. General Assembly.

The group has scored several several victories at the local level (here and here) in its efforts, too.

For those of you new to this website, we were the first media outlet in the state of South Carolina to call for the removal of the flag from the grounds of the State House in the aftermath of the Charleston shooting.  Unlike then-S.C. governor Nikki Haley, we didn’t have to wait for our crony capitalist masters to tell us the right thing to do.

Having said that, we believe the manner in which the flag was brought down was profoundly disrespectful to those who supported it (and still support it).  We were especially galled by the rank opportunism and hypocrisy of Haley, who for years supported the flag and rebuffed efforts to remove it.