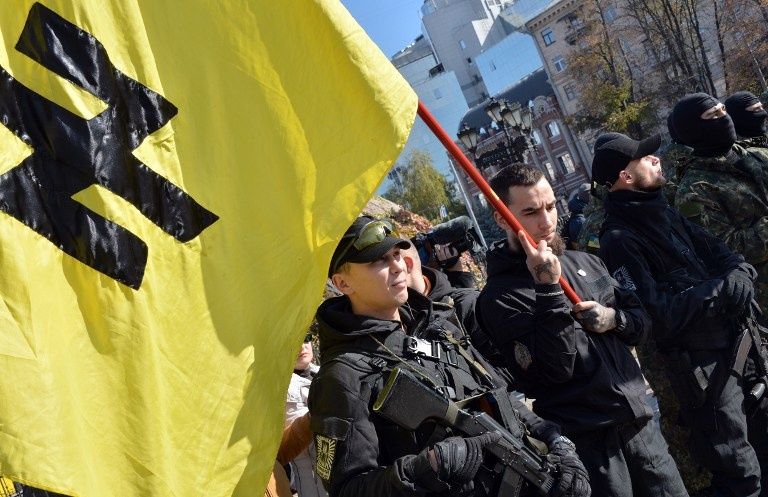 LIBERAL WARMONGERING WITH THE NEW NAZIS …

Most people probably don’t know or care much about George Soros – the multi-billionaire liberal whose “progressive” network has been subsidizing the #BlackLivesMatter movement, climate change “science” and all manner of other left wing nonsense.

Soros’ tentacles are everywhere … closer than you might think (here and here).

And they aren’t helping …

Most people probably don’t know or care much about Ukraine, either.  It’s an eastern European country that lies well within Russia’s sphere of influence – and in 2010 its people democratically elected a president perceived as being pro-Russian.

A few years ago, though, a U.S.-led coalition – one including the Nazis – threw this democratically elected government out of power and installed a puppet regime in its place.  This regime was led by an American diplomat fresh out of U.S. president Barack Obama‘s state department.

Who was really in control of the country, though?  Soros.

Leaked memos (which have gone totally unreported by the American mainstream media) show American diplomats effectively turning over authority for U.S. policy in Ukraine to the liberal billionaire – seeking his instructions as to how to proceed in their Cold War posturing against the Russian government.

“Obama has been too soft on (Russian leader Vladimir) Putin,” he observed, demanding the immediate imposition of new sanctions against the Russian government.

Soros also urged the United States to provide “professional PR assistance” to the illegitimate government it created in Ukraine.

You know … in addition to other assistance.

No wonder American has been escalating tensions in an area of the world where our country truly has no business.

The goal of all this?  Soros’ financial benefit, of course.

So to recap: America’s most beloved progressive icon (a so-called champion for social justice) has been working with European Nazis to overthrow democratically-elected governments so that he can profit financially from the chaos?  And has been dictating a ridiculously dangerous (and expensive) foreign policy to our government in an effort to prop up his coup?

Yup … that about sums it up.

No wonder the liberal mainstream media is adopting a “move along, nothing to see here” approach to the leak of all these documents.

Stoning In Afghanistan: Don’t Call It A Comeback!