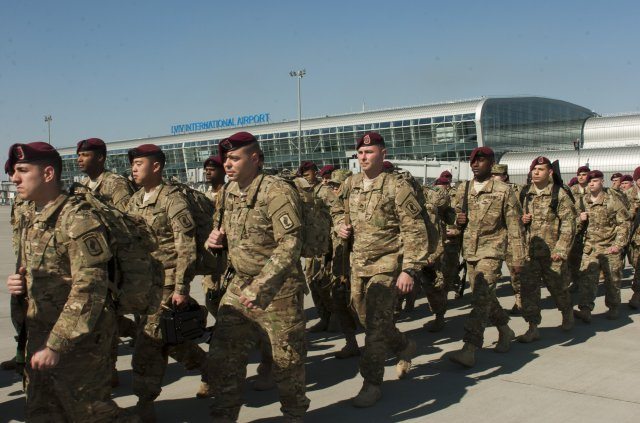 || By FITSNEWS || File this one under the most needless of “needless interventions.” Not to mention among the most ill-timed and  ill-conceived …

The United States has sent three hundred paratroopers to Lviv, Ukraine (a non-NATO nation) this month – ostensibly to “train its forces fighting pro-Russian rebels.”  So yeah … we’re going be training these guys.

Three hundred troops won’t do a damn thing militarily … but you’d better believe they will spark a major geopolitical crisis with Russia.  Which of course is exactly what the warmongering United States government is trying to do.

“The United States and its allies have crossed all possible lines in their drive to bring Kiev into their orbit,” Russia’s defense minister Sergei Shoigu said.

He’s right … which is why Russia is now threatening to “target” nations which host a new U.S.-led missile defense installations, like Poland and Romania (which are NATO nations).

“Nonnuclear powers where missile-defense installations are being installed have become the objects of priority response,” the country’s top general Valery Gerasimov said this week.

What’s got the “bear” so riled up?

“That coup was not only supported by the United States and European Union governments — much of it was actually planned by them,” former U.S. Rep. Ron Paul wrote earlier this year.

Indeed … and now we’re sending in troops to escalate the crisis further.

Iranian Suicide Drones: Coming Soon To A Strait (Not) Near You!