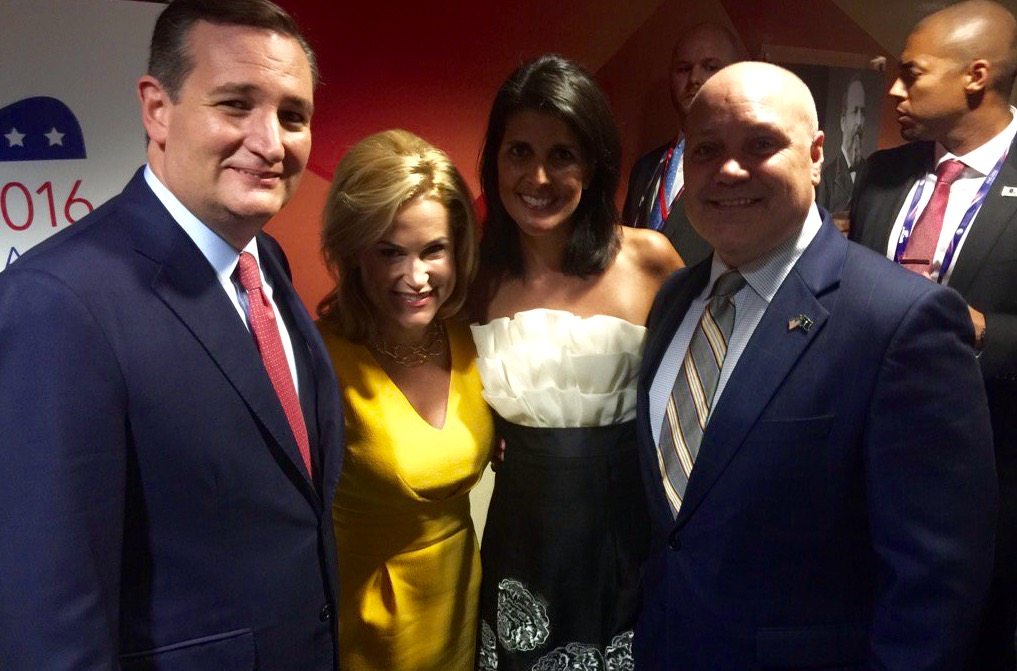 NIKKI HALEY COZIES UP TO HER “SECOND CHOICE”

U.S. Senator Ted Cruz‘s big speech to the 2016 “Republican” national convention has been condemned by supporters of GOP nominee Donald Trump – and vilified by rank-and-file “Republicans,” too.

Across the GOP spectrum, reaction to Cruz’s speech has been negative.

First, Cruz is among those who insisted all “Republican” presidential candidates sign loyalty oaths binding them to endorse their party’s nominee – no matter who it was.  And not only did Cruz sign such an oath, he repeatedly vowed to make good on it.

Second (and more importantly), Cruz never could have captured the “silver medal” in the GOP primary had he not made a calculated decision during the early months of the election to embrace Trump’s populism.  Sure he and Trump eventually turned on one another, but Cruz’s second-place status in the GOP race was due in no small part to his decision to ride Trump’s populist coattails rather than rebuke them.

Speaking of rebuking Trump, though … not everyone attending the convention in Cleveland was upset with Cruz.

S.C. governor Nikki Haley – reduced to irrelevance on the national stage after spearheading the #NeverTrump movement during the primaries – embraced Cruz following his speech.

Cruz was Haley’s second choice for president.  In fact she only endorsed him after her first choice – U.S. Senator Marco Rubio of Florida – flamed out spectacularly.

(And after she punked Cruz regarding her endorsement of Rubio).

Nonetheless, the two found each other following Cruz’s convention speech …

“Like a pair of scrawny stray dogs sniffing each other’s asses,” one veteran conservative activist told us.

Despite being neutered on the national stage (and at home) this year, Haley has been placed on the shortlist of likely establishment GOP candidates for the 2020 presidential nomination – one of several “fresh faces” certain party leaders are looking to tout in the aftermath of what they hope will be a decisive defeat of Trump this November.

Good luck with that …

Whatever one thinks of Trump, it is important to remember that he is not so much the creator of a movement as he is the product of that movement.  And whatever one thinks of this movement, make no mistake: It is growing … empowered by the increasingly transparent corruption of the political elite and the increasingly costly economic malaise their self-serving rule has created.

By embracing Cruz’s insurrection, Haley is once again tilting herself into these headwinds … while simultaneously empowering the most corrupt politician of them all, Hillary Clinton.