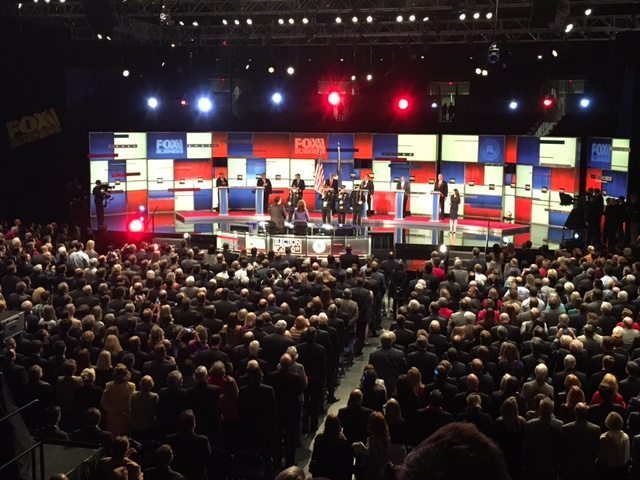 GOP frontrunner Donald Trump was on the ropes early during this week’s “First in the South” presidential debate in North Charleston, S.C.  The billionaire businessman – who enjoys a commanding lead in the early-voting Palmetto State – was outclassed early on the debate stage by U.S. Senator Ted Cruz, who masterfully deflected Trump’s criticisms regarding the former’s eligibility to appear on the 2016 ballot.

Cruz was born in Canada – to an American mother and a Cuban father.  Constitutional scholars have questioned whether he meets the “naturally-born” criteria established by the U.S. Constitution – and Trump brusquely demanded that Cruz seek a declaratory judgment affirming his eligibility.

“If you become the nominee, who the hell knows if you can even serve in the office?” Trump said.  “I’m not bringing a suit, I promise, but the Democrats are going to bring a lawsuit.”

Cruz shot back that Trump’s own lawyers had previously ruled in his favor on the matter – and that his rival was only raising the issue because Cruz’s poll numbers had gone up.

“Since September, the Constitution hasn’t changed, but the poll numbers have,” Cruz retorted.

The crowd of mostly establishment “Republicans” at North Charleston Coliseum roared their approval of Cruz – and booed Trump lustily.

It was a pivotal moment – one that could have conceivably changed the entire complexion of the race.  Why?  Because this debate marked the first time that Trump and Cruz – who have enjoyed an uneasy alliance at the top of the “Republican” primary field – openly sparred with each other.

And in the first round of fighting – Cruz clearly got the better of “The Donald.”

But Trump rallied …  with two ensuing exchanges turning what could have easily been his worst debate performance of the 2016 cycle into arguably his best showing.

The first exchange involved Trump’s reaction to recent comments by S.C. governor Nikki Haley – who criticized Trump as one of the “angry voices” voters should “resist” during her response to U.S. president Barack Obama‘s final State of the Union address.

Haley, who is very popular in her home state, was sitting in the audience – and received a cheer when Fox News’ moderator Neil Cavuto mentioned her name.

It seemed as though Trump was on the verge of eliciting another round of boos from the establishment crowd … but he successfully walked the tightrope.

“Our country is being run horribly. I will gladly accept the mantle of anger,” Trump responded. “I wasn’t offended, I am angry. She said the truth.”

Trump also referred to Haley as a “friend.”

Having regained his footing – and the support of the crowd – Trump went on the offensive when Cruz criticized him for embodying “New York values.”

“Not a lot of conservatives come out of Manhattan,” Cruz said.

Intended to make Trump look weak on social issues – which loom large in early-voting South Carolina – the broadside afforded Trump an opportunity to evoke memories of the September 11, 2001 terrorist attacks on the United States.

“I saw something that no place on Earth could have handled more beautifully, more humanely than New York,” Trump said. “The people in New York fought and fought and fought.  We saw more death and even the smell of death and it was with us for months.”

As Trump spoke – in genuinely emotional, uncharacteristically soft tones – you could have heard a pin drop in the packed arena.  Seriously: If there was a heartstring left un-tugged, we didn’t see it.

The crowd roared its approval …

Trump and Cruz are dominating polling in early-voting South Carolina.  Trump is currently drawing 33 percent support from likely primary voters, according to aggregate polling data from Real Clear Politics, while Cruz is in second place with 22 percent support.