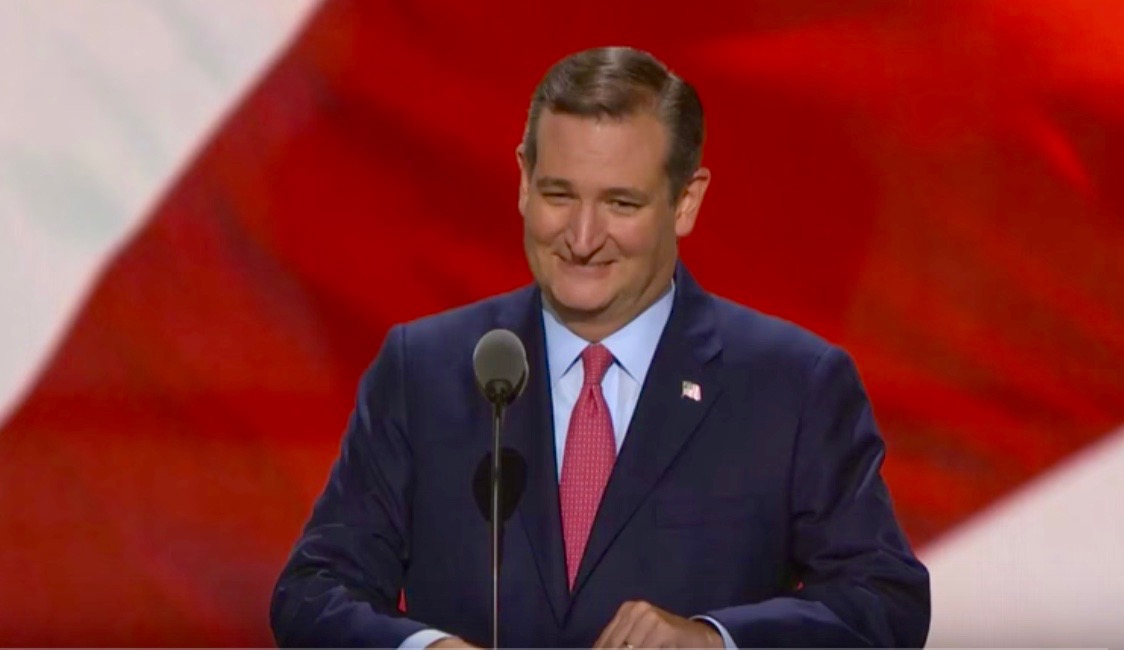 U.S. Senator Ted Cruz of Texas apparently didn’t get the “party unity” memo.  Or if he did get it … he ignored it.

Cruz threw the 2016 “Republican” national convention into further disarray on Wednesday evening when he declined to endorse the presidential bid of GOP nominee Donald Trump, his former rival.

After taking the stage at the Quicken Loans Arena in Cleveland, Ohio to a standing ovation, Cruz departed to cascading boos – as well as round rebukes from Trump supporters and many establishment “Republicans.”

Trump and Cruz met two weeks ago – at which point the victor offered the vanquished a prime time speaking slot at the convention.  Cruz took him up on the offer … then he tried to take Trump out at the knees.

“If you love our country and love your children as much as I know you do, stand, and speak, and vote your conscience, vote for candidates up and down the ticket who you trust to defend our freedom and to be faithful to the Constitution,” Cruz said – a clear dig a Trump’s less-than-stellar constitutional commitment.

As the anger mounted, Cruz tried to dismiss it as the “enthusiasm of the New York delegation” – reprising an earlier dig at Trump’s “New York values.”

That only incensed the crowd further.

“We want Trump!” they chanted.

They got him, too.

As Cruz concluded his remarks, Trump appeared in the crowd – upstaging his defeated rival and flashing a “thumbs up” sign to the delegates jeering his speech.

After Cruz departed the stage, things got even testier.  One state party chairman was reportedly so livid with Cruz he had to be physically restrained.  The Senator was snubbed by party donors – including casino magnate Sheldon Adelson, who literally barred Cruz from entering his suite.  Meanwhile Cruz’s wife – Heidi Cruz – had to be escorted out of the arena by security as convention-goers assailed her with chants of “Goldman Sachs,” her Wall Street employer.

On social media, Cruz was slammed as a “traitor” and a “liar” – and those were some of the nicer descriptions.

“I think it was awful,” New Jersey governor Chris Christie said. “And quite frankly, I think it was something selfish. And he signed a pledge. And it’s his job to keep his word.”

Cruz pledged on multiple occasions during the 2016 election cycle that he would endorse the eventual GOP nominee – whoever that might be.  In fact he affixed his signature on at least two party pledges affirming his intention to do so.

For most of the 2016 race, Cruz and Trump got along exceedingly well.  In fact Cruz benefited tremendously from his early embrace of Trump’s populist insurgency – gaining ground in the polls while numerous establishment “Republican” candidates imploded following their futile attempts to bring down “The Donald.”

Of course Cruz and Trump quickly turned on one another when the race hit its home stretch.  Cruz even went so far as to collude on delegates with liberal Ohio governor John Kasich in a desperate bid to derail Trump’s front-running candidacy.

Cruz unloaded on Trump after suffering a campaign-ending defeat in Indiana, calling him “a pathological liar,” a “serial philanderer” and “utterly amoral.”  He later accused the media of stealing the nomination for Trump – arguing that “a handful of network executives” were guilty of “manipulating and trying to deceive the voters” in an effort to secure him the GOP nod.

And Trump seriously thought there was a chance this guy might endorse him?

Not Everybody Liked Chris Christie’s Speech