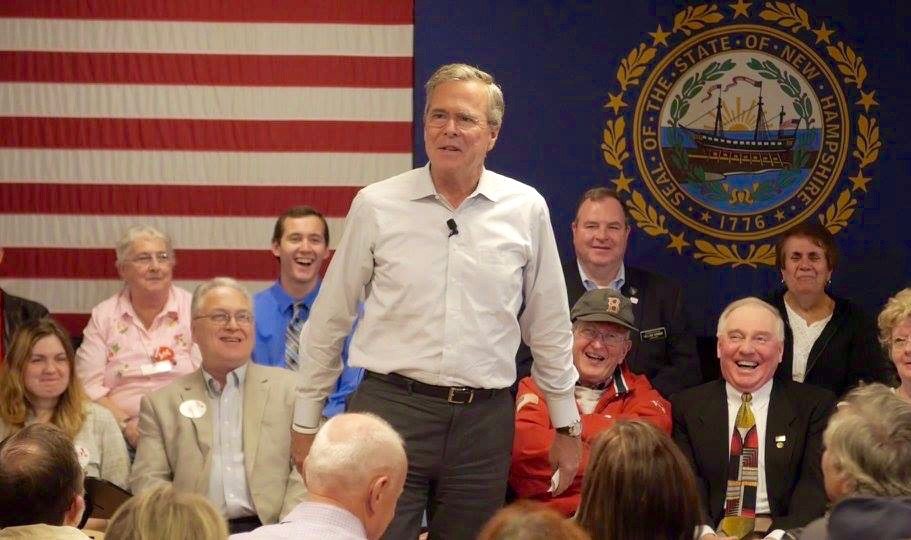 In any other election cycle, former Florida governor Jeb Bush probably would have waltzed to the “Republican” presidential nomination. The early frontrunner for the 2016 GOP nod, Bush’s campaign was staked to more than $100 million of establishment money.

Not a dime of it mattered, though …

Nor did the “First in the South” support of neo-Confederate political advisor Richard Quinn – who guided Bush to a performance so terrible he had to drop out of the race even before all the votes in the Palmetto State had been counted.

It’s shocking to think about this, but exactly one year ago Bush was leading all comers in national GOP polling – having fended off the early surge of Wisconsin governor Scott Walker.

Establishment “Republicans” were giddy – eager at the prospect of nominating another “electable” moderate they could control.

Within a matter of weeks, though, Bush, Walker and the rest of the GOP field had been consumed by the populist juggernaut of Donald Trump.

Riding a wave of indignation at the failure of the status quo in Washington, D.C. (including liberal “Republican” leaders like John Boehner), Trump stormed to the front of the GOP pack – and survived every attempt by the establishment to take him out.

Is Bush bitter about getting his ass handed to him?

He and his family – including fiscally liberal ex-presidents George H.W. Bush and George W. Bush – have already snubbed Trump, saying they would not support him even if he became the GOP nominee.

Now that Trump is on the verge of receiving that nomination, Jeb Bush couldn’t resist taking another swipe …

On Friday, in an opinion piece published by The Washington Post (a.k.a. Hillary Clinton’s hatchet brigade), he vented his spleen against “The Donald.”

“I do not believe Donald Trump reflects the principles or inclusive legacy of the Republican Party,” Bush wrote.  “And I sincerely hope he doesn’t represent its future.”

“Trump’s abrasive, Know Nothing-like nativist rhetoric has blocked out sober discourse about how to tackle America’s big challenges,” he wrote.

Isn’t this guy supposed to be golfing?

From our perspective, Bush’s candidacy had precisely one redeeming quality – its support for free market education reform. In the end, though, Bush was willing to betray even that in an effort to suck up to S.C. governor Nikki Haley (who wound up totally stabbing him in the back).

We hate to break it to Bush, but it’s about time he got around to consuming the nice, tall glass of “STFU” the GOP electorate ordered up for him during the 2016 primary campaign.

Frankly, it’s pretty pathetic that a guy bearing the name of his party’s failed past – who has been roundly rejected by its present – believes himself fit to give a lecture on its future.

Don’t get us wrong: We don’t care what the GOP does (we bailed on that party years ago) … but to watch Bush attempt to reset its agenda is painful.