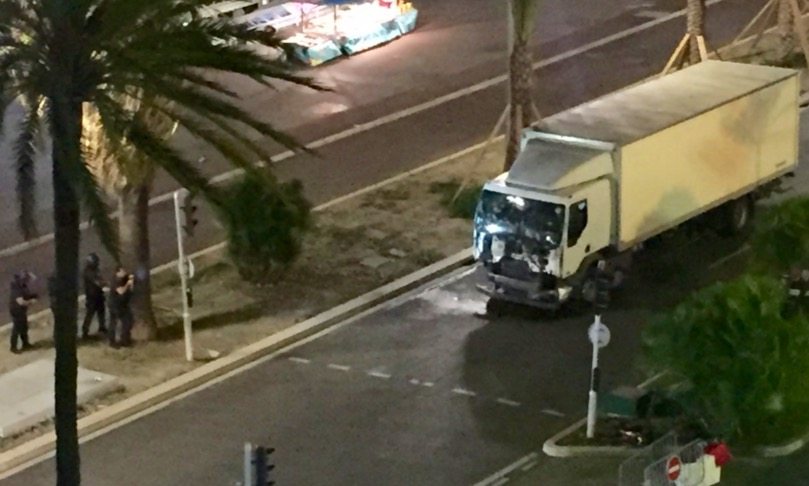 For the third time in the last year-and-a-half, France has been rocked by a major terrorist attack carried out by radical Islamic extremists.

First was the January 2015 assault on the offices of Charlie Hebdo in Paris that killed twelve people.  Then in November 2015 came a coordinated attack on multiple locations in Paris – including The Bataclan nightclub.

Now Nice, France – a tourist mecca located on the Côte d’Azur – is the site of another attack that has left scores dead.

During a celebration of Bastille Day – France’s biggest national holiday – a white truck plowed into a crowd of revelers that had gathered along Nice’s Promenade des Anglais to watch fireworks.

The attack began at around 10:30 p.m. local time when the truck – traveling at an estimated thirty miles per hour – began its deadly run down the famed seafront avenue. It continued on its murderous path for more than a mile – the driver swerving deliberately in an effort to hit as many people as possible.

“Dozens” are reported dead in the attack. Original reports quoted local authorities as saying thirty people had perished, but that count quickly escalated to fifty, then sixty … then seventy-three.

Social media was quickly littered with gruesome pictures and videos of the aftermath of the attack. This was among the tamer offerings …

“It’s total panic,” a witness told France’s BFM TV. “We saw a white (truck) which drove directly into people on the Promenade des Anglais.  A gunman fired into the crowd before being shot by police.”

“Everyone was calling run, run, run there’s an attack run, run, run,” another witness said.  “We heard some shots. We thought they were fireworks because it’s the 14th of July.”

Unconfirmed initial reports suggested that multiple gunmen were stowed away inside the truck – and that several were roaming the streets of Nice in the aftermath of the attack taking hostages and killing additional victims.

Those reports were disputed by French officials, however.

So far there is only one confirmed perpetrator – the driver of the truck – who was shot and killed by police during the attack. No terrorist organization claimed responsibility for the carnage in its immediate aftermath, although suspicion quickly fell on the Islamic State in Iraq and Syria (ISIS).

An ISIS spokesman called on other would-be terrorists to emulate the attack – which was allegedly carried out by a 31-year-old French Tunisian named Mohamed Lahouaiej-Bouhlel. Described as a loner, Bouhlel lived in Nice and used a rented truck to carry out the carnage.

It is not yet known if he received support or instructions from ISIS or any other known terrorist group – but early reports indicate he was not known to French intelligence services.