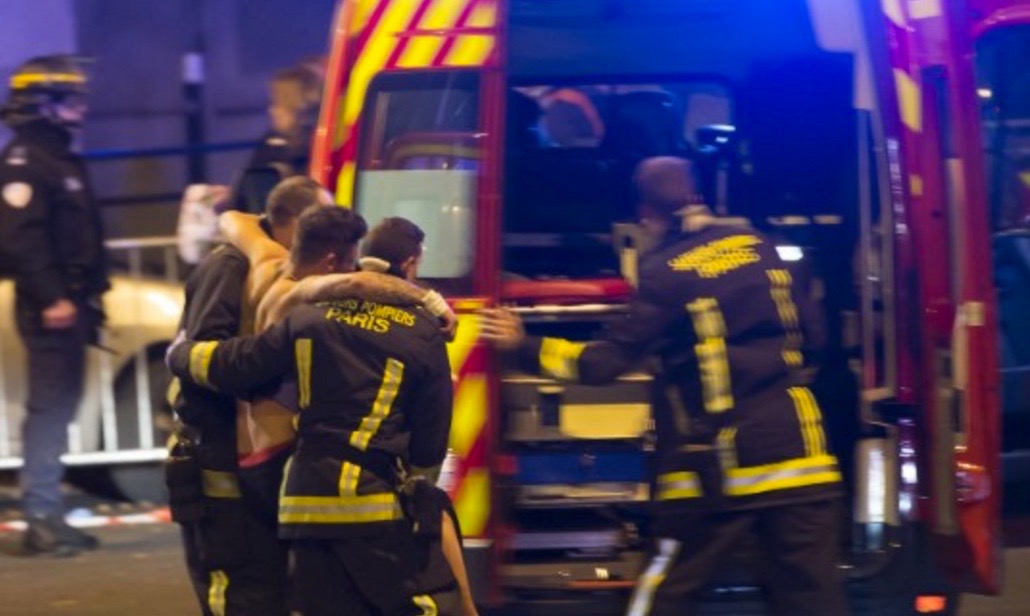 For the second time this year, the capital of France has been rocked by terrorists wielding AK-47s and shouting “Allahu Akbar” (“God is Great”).  Ten months after seventeen people were killed in a raid on a satirical publication in Paris, scores were murdered on Friday evening in the French capital during a series of coordinated attacks.

At least 120 people were confirmed dead and more than 350 wounded in the latest violence, French authorities were said late Friday – a number that is expected to rise.

The scene of the grisliest carnage in Paris?  The Bataclan – a concert hall where police staged a daring raid to free more than 100 hostages.  Two terrorists were reportedly killed during that operation – although dozens were reported dead inside the building.

The attack on the Bataclan began approximately thirty minutes into a concert by the California-based Eagles of Death Metal.

One of the wounded at the Bataclan said victims were slaughtered by two men in black “un par un.”  Or “one by one.”

Here is an amateur video taken outside the concert hall …

Terrorists also attacked near the Stade de France – with a suicide bomber reportedly detonating an explosive device outside the facility during a soccer match.

Several other bomb and gun attacks took place at bars and restaurants in central Paris – killing and wounding an unknown number of people.

French president Francoise Holland declared a state of alert and ordered all borders to his country closed.  A curfew was also imposed.

Holland called the attacks against his country “unprecedented.”

“Faced with terror, this is a nation that knows how to defend itself, how to mobilize its forces and once again, knows how to overcome the terrorists,” he added.

Later Hollande spoke outside the blood-drenched concert hall, vowing France “will lead the fight” against the attackers.

“It will be ruthless,” he added.

Military and law enforcement assets in and around large cities all over the world – including here the United States – were placed on heightened alert in the aftermath of the attacks.  So far no “credible threat” has been reported against any targets in America, though.