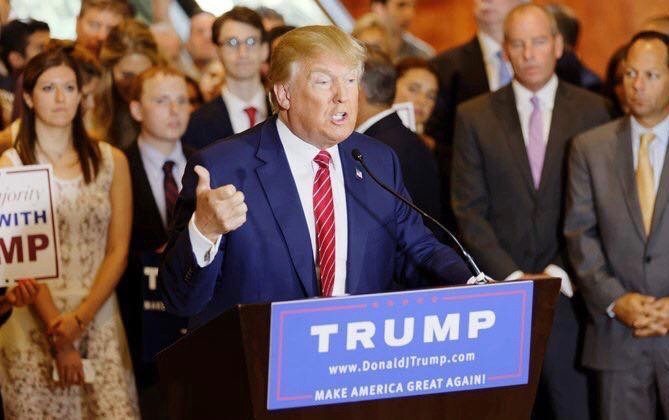 GOP FRONTRUNNER: “AS FAR AS I’M CONCERNED, IT’S OVER”

Viewed as unlikely to capture the GOP nomination on the first ballot just a few short weeks ago, “Republican” presidential frontrunner Donald Trump is enjoying a fresh surge of momentum – and delegates.  On Tuesday night, Trump scored emphatic victories in Connecticut, Delaware, Maryland, Pennsylvania and Rhode Island – routing his rivals by roughly thirty percentage points in each state.

The billionaire mogul also racked up at least 105 new convention delegates – bringing his current total to 950.

Trump’s delegate haul could create real trouble for the badly-fractured GOP – whose leaders had hoped to deny him a first ballot victory, thus forcing a contested convention in Cleveland, Ohio this summer.  In fact Trump’s two “Republican” rivals – Ohio governor John Kasich and U.S. Senator Ted Cruz of Texas – are now openly conspiring in an effort to keep Trump below the 1,237-delegate threshold.

Both Kasich and Cruz have been mathematically-eliminated from winning the GOP nomination during the primary process – and would have to benefit from a contested convention in order to become the party’s nominee.

Even more problematic for “Republicans?”  Trump has now won a whopping 10.1 million votes – or 40 percent of the GOP electorate.  In other words he’s eclipsed 2012 nominee Mitt Romney‘s primary vote total from four years ago – with ten states (including heavily-populated California and New Jersey) still to vote.

Trump wasted little time in capitalizing on his big win.

“When the boxer knocks out the other boxer, you don’t have to wait around for a decision,” he told supporters. “As far as I’m concerned, it’s over.”

In any other primary, it would be … but influential coalitions of status quo “Republicans” remain dead set on denying Trump the nomination at all costs.

They’ve got their work cut out for them now, though.

The website FiveThirtyEight.com – which has been tracking Trump’s delegate progress for weeks – declared the nomination his to lose.

“When we surveyed the race a few weeks ago … Trump was coming off one of his worst results of the campaign in the Wisconsin primary, along with a disastrous series of results in state and local Republican delegate-selection conventions,” reporter Nate Silver wrote.

“Something changed for the better for Trump in the past couple of weeks,” Silver noted.  “At the time we issued those delegate projections, Trump had yet to get 50 percent of the vote in any state and both his national polls and statewide results seemed stagnant.  Now he’s gotten over 50 percent in six states in a row.  Whereas Trump had once been a safe bet to underperform or, at best, match his polling averages, he’s now beaten them in the last six states.”

Trump could see additional momentum as voters digest the crass collusion between Kasich and Cruz, who agreed this week to coordinate their campaigns in an effort to deny Trump the necessary delegates.

Trump must capture 1,237 bound delegates in order to win the GOP nomination on the first ballot this summer – assuming “Republican” leaders don’t try to play fast and loose with the rules in an effort to block him.  If Trump doesn’t hit that threshold, it’s highly unlikely he would emerge victorious from the convention.

The latest aggregate polling in the Hoosier State shows Trump with a narrow six-point lead over Cruz – 39-33 percent.  Kasich is currently drawing 20 percent, but has agreed not to campaign so that Cruz can have a “clear path” against Trump.

“Trump can put Cruz away in Indiana next week,” one GOP leader told us.  “If Trump wins big there, it’s all over.”

Our Rigged Republic: America Is Getting It