HOW DOES HE FIND THE TIME TO DO HIS JOB?

Over the last six-and-a-half months, Laurens County, S.C. sheriff Ricky Chastain has exchanged more than 6,600 messages with a woman rumored to be his paramour.

For those of you keeping score at home, that’s an average of three dozen messages per day.

Yeah … when does this guy find time to work?

Hundreds, if not thousands, of these messages were of a sexually-explicit nature – many of them sent during the day (a.k.a. “taxpayer time”).  Also, more than three-hundred of the messages exchanged between Chastain and the woman contained photos – dozens of which featured graphic nudity.

The racy, emoji-laden exchanges also alluded to the sending and receipt of numerous “Snapchat” messages between the sheriff and his rumored lover.

This website has confirmed the cell phone number Chastain used to conduct the exchanges – as well as the legitimacy of the messages themselves.  In fact, the embattled sheriff used the same cell phone number with the woman that he provided to election officials last month when he filed for reelection to another four-year term.

The messages are also replete with references to Chastain’s job … further evidence of the extent to which he spent taxpayer time engaging in X-rated banter.

Here are a few excerpts from the exchanges (warning, a few of them contain graphic descriptions of sex acts) … 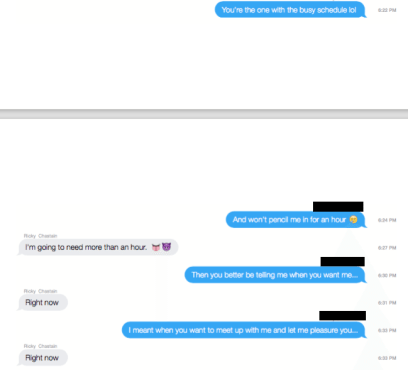 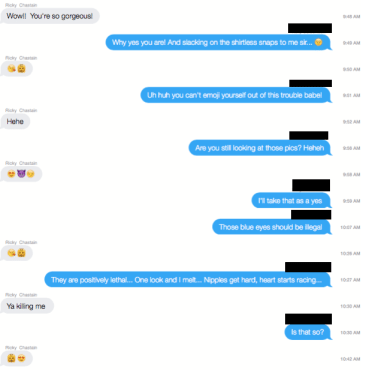 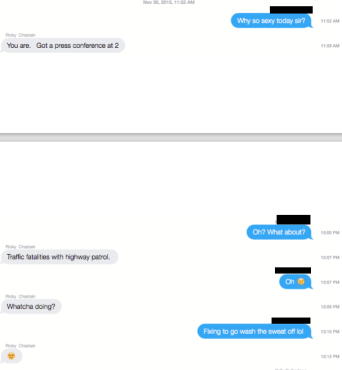 Obviously there are thousands of additional exchanges we chose not to print at this time.  In fact, the files we were provided were so large we had to upgrade our servers just to accommodate them.

At this point, we are not releasing the name of Chastain’s alleged “mistress” – or any other identifying information about her.  Nor are we publishing any of the racy images contained in the chats.  Of interest?  Sources close to the woman tell us she and Chastain never had a physical relationship – that their romantic interactions were confined exclusively to electronic communication.

Chastain won election to his current term in 2012 – despite being busted impregnating a co-worker and driving her to Charlotte, N.C. for an abortion (in his patrol car, no less).  Chastain relied on county taxpayers to subsidize an extended “recovery period” for his lover.

We’ll have more on this story very soon … including our rationale for publishing the limited information we did (as well as details about other shoes that could possibly drop in this drama in the weeks ahead).