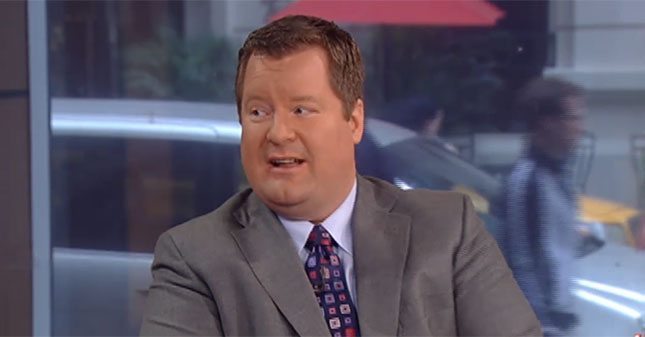 ERICK ERICKSON: “I DON’T GIVE A DAMN ABOUT THE WILL OF THE PEOPLE”

It’s been awhile since Erick Erickson was last on our radar … which is a good thing.

The turkey-necked “conservative” commentator is the very definition of a status quo “pay-to-say” hack – a bought-and-paid-for tool of the “Republican” political establishment that has been sticking it to the hard-working people of this country for years.

With no signs of stopping …

Erickson claims to be a “conservative,” but he’s been sucking up to establishment GOP politicians for years.

Now that the people are fighting back against these tools, Erickson is pissed … in fact he’s the leader of a movement to deny them their voice in the “Republican” electoral process.

His rationale?  “The will of the people is crap.”

That’s the headline of Erickson’s latest piece, in which he continues his jihad against the insurgent populism that’s fueling the rise of surprise GOP frontrunner Donald Trump.

And there you have it …

Obviously this website doesn’t begrudge open opposition to a “Republican” nominee.  In fact after endorsing former U.S. Rep. Ron Paul in the 2012 GOP primary, we proceeded to endorse libertarian Gary Johnson in the 2012 general election.

Why?  Because “Republicans” saw fit to nominate a socialized medicine-loving shape shifter by the name of Mitt Romney, that’s why.  We said Romney wasn’t electable – and he proved us right.

But that’s not the point …

The point is there’s a major difference between our decision to bail on Romney (well, the entire GOP) and Erickson’s fatwa against Trump.  Specifically, we never sought to reverse the decision of the 9.8 million “Republicans” who voted for Romney during the primary process.

That’s exactly what the GOP establishment (and Erickson’s “conservative” movement) are trying to do to Trump.

“The plan is still to try to stop him from getting 1,237 delegates,” Erickson said.

Yeah.  It’s one thing to actively push for your favored candidate – it’s another thing entirely to disenfranchise people by arguing that their votes.

Especially if your only logic for disenfranchising them is “we know better than you do.”

This website has a long history with Erickson.  In May of 2010 – three days after our founding editor Will Folks was pressured by enemies of then-Tea Partier Nikki Haley into acknowledging his prior “inappropriate physical relationship” with the former state lawmaker – Erickson put up an article claiming that Folks had been paid to smear her.

“We know who paid Will Folks to push this story out there,” he wrote.

Within 24 hours, however, Erickson had backed down from his accusation completely. In fact he published a follow-up post saying “I have no clue if anyone is behind Will Folks doing this,” and later admitted that he was merely stringing the media along “like Folks has done.”

Anyway, we look forward to watching Erickson and his allies continue trying to fly in the face of the “will of the people.”

If he doesn’t give a damn about the will of the people why isn’t he backing everyone’s favorite authoritarian, Donald Trump?

If he doesn’t give a damn about the will of the people why isn’t he backing everyone’s favorite authoritarian, Donald Trump?

Donald Trump IS the will of the people, Homeslice.

Please try to keep up.

Kinda hard to keep up when all he is interested in is NAMBLA and pedophila.

Will of the people voting in the Republican primary. Polls of all voters shows otherwise.

Erickson was once one of my ‘go to ” guys on politics. But he has sold his soul to the establishment like so many others. When he wouldn’t let Trump speak at Red State last year, that finished him with me. His daily update that I used to get now goes straight to spam, then the dump. Trump is the will of the people, pure and simple. Lead, follow or get out of the way. Trump 2016.

Hit him where he’ll feel it and unsubscribe already.

Sorry… that made me chuckle a bit.

At least Rush has that Clintonesque bad boy lovability. This cat is just a total douche bucket.

Erick Erickson is the reason that what you send on Twitter is called a tweet. The word twit was already taken and it describes Erickson to a T.

Well, yeah. And this country was founded as a republic.

Maybe Mr Erickson can explain why he has such a hard-on [TBG profoundly apologizes for the imagery evoked…] for wasting US blood and treasure to bring democracy to the rest of the world?

Erickson wrote.“I don’t give a damn about the will of the people.”

Next, in a staggering display of an epic lack of self awareness, Erickson will call Trump an “authoritarian”. Wait for it…

The founding fathers were once an angry mob.

He looks like Fred Flintsone in a suit. And he’s hittin’ the bronto burgers a little heavy.

He, like so many others in the political world, are making a fortune off pretending to be smart and caring about this country. He is a whore and a well paid one at that.

Shun these talking heads and pundits. Better yet, disconnect the TV and think and act for yourself. Cut off the money and let them get real jobs.

Another triple chin, fat, pompous, know it all, do nothing, sit on my derriere all day and pontificate, want to be king maker, what is with all these undisciplined men? Just look at that double chin, put him on a diet pronto!!!!! before he explodes. They all look alike, and sound alike! Beck, Rowe, this one, they must be all eating out of the same garbage can.

Another triple chin, fat, pompous, know it all, do nothing, sit on my derriere all day and pontificate, want to be king maker, what is with all these undisciplined men? Just look at that double chin, put him on a diet pronto!!!!! before he explodes. They all look alike, and sound alike! Beck, Rowe, this one, they must be all eating out of the same garbage can.

Like the RINO dogs they are they will not get far because Tea voters are their veterinarian and this year—they ALL get wormed !!!

Have no fear for the record is clear–cons have voted and will
And Haley-Wilson–RINOs ad nauseum are in for quite a thrill !!!

Erick Erickson, not a Conservative leader, he is a political commentator. As a commentator, he is entitled to his opinion, and it is wrong. He is not officially representing anyone but himself. To take his comments as the official word of the party is over-blowing the situation.
I personally have never paid much attention to him, and I doubt that he has that much of a following outside this region(Atlanta radio). Erickson has a whopping 70,000 subscribers on his email list. I don’t think the Conservative movement is hanging on every word that rolls out of his mouth.

While 70,000 may not be a lot of sheep, the shepherds take him seriously.

Ericsson is what “conservatism” is really all about.

What’s hilarious is all you “conservatives,” are jumping all over him cause he has revealed what a sham your gutter “philosophy” is.

Tell us some more about

Conservative, republican. I get it.

That’s the guy from Modern Family. amirite? His boyfriend is that red-headed dude.

If it were up to Erickson the GOP would have super delegates.

The GOP has superdelegates they just don’t call them that. While this is state specific for many states delegates bound to the people who have dropped out of the race are no longer bound and are free to vote for whomever they please. That makes them Superdelegate. In fact in almost all of the states if no candidate is elected on the first round, the delegates bound to parties who have dropped out of the race are free to support whomever they choose. It is likely the GOP equivalent of Superdelegates will decide the nominee at the convention.

Gee, thanks Mark, you’re so smart. Now, why don’t you explain why the Dems *do* have super delegates. You did such a good job explaining the GOP, can’t wait to read your explanation of the Democrats.

Now give poor Mark a chance. Maybe he is really old and meant super as in swell, admirable, 23 skidoo! I have no doubt he can explain how apples are really oranges. :-/

What the fuck is going on with this Fuckin’ Cockroach’s head ?

Pompous, Sanctimonious, Self-serving, Hypocritical, Egotistical, Sold out to the establishment. I know I left something out.

This site is crap

I say that Folks is paid to write much of what he posts here. Goose, gander, pot, kettle…

The “big secret” is that those running government are on the side of “democracy” only when it serves them. Deep down they feel they are most everyone’s betters and deserve to rule the common man involuntarily as a result.

Lip service to democracy is just so the masses don’t string them up by their necks.

I really believe our only help and response is to take these protesters and big money on as one.If

My guess is that Erick Erickson will be made to care. His anti-Trump movement may very well be helping Trump.

Hopefully Trump echoes Ronald Reagan (about a new Republican party, raising the banner of bold colors, and no pale pastels) and Carly Fiorina (about our founders never intended us to have a professional political class).

It’s obvious that the USA has become a Fascist State.
Fascist State is defined as one controlled by a few capitalist, using Nationalism as a rally point, and suppressing any uprising or organization of the people against it. As was the history of Italy from 1919 until 1939.

The USA no longer has a democracy it’s clearly a Fascist State as defined above.
For examples:

1st: Democrats have “Super Delegates,” that are not controlled by the will of the Democrat primary voters. Free to chose who ever they like.

2nd: GOP convention uses archaic convention rules that can be easily manipulated to chose whoever a few crooked control characters wish to be the nominee. Completely negating the will of the majority of GOP primary voters. As has been done many times in the past, i.e., Teddy Roosevelt had his winning primary election stolen at the Convention.

3rd, the election is a complete farce as the “Electoral College” decides who is President not the voters.

Time to clean up this “Best Democracy, Money Can Buy,” get rid of all the PAC money, illegal campaign money, Paid to say Media, and crooked Supreme Court that thinks “Corporations are people, and with more powers.” BEFORE IT’S TOO LATE!

Its only mob rule when you don;t agree with the majority.

Erickson is to “conservative” as Will Folks is to…”sleeping with Haley”
Airhead buffoons who remove all doubt that they are airheads daily !!!