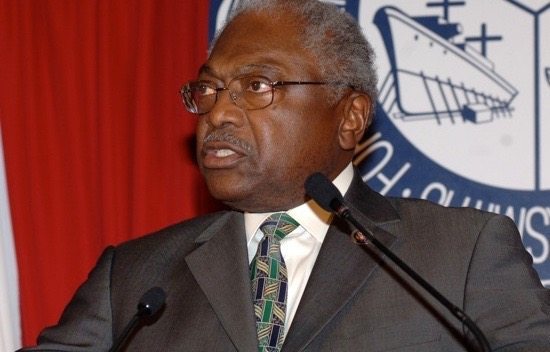 According to an expansive report prepared by Renee Dudley of Bloomberg, in late 2011 Clyburn got the U.S. Department of Housing and Urban Development (HUD) to grant a one-year extension to the notorious “Village at River’s Edge.”

This project – foreclosed upon in May 2013 – received at least $7.8 million in federal “stimulus” money and millions more in grants from HUD.  It also received tax dollars from the City of Columbia, S.C. thanks to Benjamin, who sold city council on the idea back in 2006.

“By the time Clyburn sought the one-year extension, the building contractor had threatened to stop work because of unpaid construction bills, a HUD employee had raised questions about mis-spending of the project’s federal money, and the U.S. Department of Justice had started an investigation,” Dudley reported. “The probe included secret wiretaps on the telephones of the developer, Jonathan Pinson, who was also a Clyburn campaign contributor.”

In fact four days after Clyburn sent a letter to HUD’s South Carolina field office leader Larry Knightner, Pinson was on the phone with a business partner discussing how the congressman’s advocacy would help put the kibosh on questions surrounding the deal.

And keep the gravy train rolling …

“F*ck HUD, and they don’t know,” Pinson said on a wiretap referenced in Dudley’s report.  “Don’t any of y’all mention it to ’em, but Clyburn already sent the letter to Larry Knightner.”

Last July, Pinson was found guilty on twenty-nine of forty-five charges filed against him by federal prosecutors.  Most of those charges stemmed from a bribery scandal involving S.C. State University (SCSU) – which is home to the biggest Clyburn boondoggle of them all.

That scandal also briefly ensnared Benjamin, who along with Pinson was the beneficiary of a night of debauchery in Orlando, Florida in December 2010 – paid for by the developer at the heart of the SCSU bribery scam.

How serious are these scandals?  Deathly.  Two months ago Eric Robinson – a businessman who was Pinson’s college roommate at SCSU – was found dead in a hotel room in Atlanta, Georgia.  Robinson had been charged by the government in connection with the SCSU scandal, but was acquitted on all charges.

To read the entire Bloomberg report on Clyburn’s connection to this boondoggle, click here …

Not So “Fast Track?”

I’ll go ahead and start it off….”This article is just racist!!!”

“I’ll go ahead and start it off….”This article is just racist!!!”

Don’t know about the article but you can rest assured that the comments will be . . .

Program Alert: The new reality show, “Southern Tomfoolery” starring none other than the infamous “Duke of Dupe”, Jim Clyburn, is now in negotiations with the Federal Gotcha’
Network. Details to be announced later.

And rest assured you’ll stand behind Clyburn, Pinson and Benjamin.

Why do people think liberals have such a fascination for Clyburn? He has a job as a direct result of GOP gerrymandering. His seat may be a safe seat but so are most of the other House districts for Republicans. Clyburn’s corruption is far from surprising but don’t pretend Republicans did not have a hand in creating the climate that let his corrupt fat ass get comfortable enough to rip us off.

What we liberals would rather have is decent districting that makes Clyburn as well as other House members have a harder time winning elections so that the assholes we send to DC might actually have to worry about their job prospects if they decide to screw with us. It will definitely result in a better crop of Republicans AND Democrats in office. We would all benefit from that.

As if gerrymandering is something new, check out Elbridge Gerry.

BTW have you ever seen a gerrymander map of Chicago?

SCBLUEBALLS forget the political map…. get out an Atlas and use it to move the hell out of here…

The most corrupt Republicans in the former district ruled over by Clyburn are joined to him at the hip. It’s more than just them being done a favor, by the way the current district is set up. It’s a deep level of cooperation with them on many issues for many years, and the connection with them comes from their former political lives as Democrats.

In SC, just because you switch parties does not mean you give up your contacts and cronies in the other party. Far from it. You keep them, and can use them at will. See Leatherman for a perfect example of that, besides Clyburn.

This does not mean that all Dems are corrupt, any more than it means all Repubs are corrupt. It just means there’s some deep connections between the most corrupt of both parties. A couple of the most vile trolls on here work overtime to convince everyone that it’s not true. It’s their obsession. Which means they are in league with the criminals who keep our political system as sick as possible in this state.

Sit there like a good little liberal lapdog and lick those salty chocolate balls.

Two guys were walking down the street when they came across a dog sitting on the sidewalk studiously licking his balls.
“Would I ever like to that,” sighed one man enviously.
“Go right ahead,” encouraged his friend. “But if I were you, I’d pat him on the head first.”

The same two guys were talking about their dogs. One says, ” Sure, I have a great dog. She’s half Labrador and half Pit Bull. It’s a good combination. Sure, she might bite off my leg, but she’ll bring it back to me.”

LOL Thanks for proving my point . . .

@ JayRoam Chief she licks her own blue ones.

racist as in SCBlues’s…… Balls are Blue? Or SCBLUEBALLS Hurt

No matter how many scandals his Democrats are involved in….FITS s#! ts a brick at each revelation. ..LMAO…

Does your caretaker know you’re on the computer?

You are reading something entirely different than the rest of us. I’ve told you, repeatedly, that Clyburn is THE link between corrupt Democrats and corrupt Republicans like Tom Rice in South Carolina. I’ve never seen anything Will has written about him that contradicted that. But you and your twisted playmate have been so intent on defending Rice and other like him that you only see what I say negative about Clyburn and Republicans beholden to him as being an attack on Republicans. We all have filters, but you constantly wear blinders.

It’s the Republicans fault!!!!…LMAO…There are Dumb@$$#$…but there ain’t NOTHING like a Liberal Dumb@$$…LMAO…you take the cake, for stupidity….

Name something that Clyburn has been involved in that WASN’T a boondoggle or crooked. (crickets chirping!)

Stop eating it then.

Clyburn is one of the most corrupt politicians from the State of South Carolina in our lifetime. And that’s saying a lot.

This is no partisan statement. Anyone who is honest, regardless of party, should agree – if they’ve followed all the excellent coverage of his corrupt, nepotistic, crony-stroking ways by David Wren and others.

um Low IQ John…. Have u seen the district?

In a gerrymandered, special-interest district.

But not one white vote, we are high-information-voters, not racist who vote by skin color.

He quoted that great, old Southerner Strom Thurmond…”it is a southern gentleman’s prerogative to make money where and when he can…” Fortunately, Strom was smart enough to keep his dealings a little more private. Enos taint that bright. Just wait until they have a forensic audit at SC State.

And remember Benjamin’s brother in law who was shot and killed in Charlotte? What happened?

Per Bloomberg: why is it taking 10 months to sentence Pinson on May 20?
Maybe, he’s ‘cooperating’ more than Thomas Ravenel?
Who is this ‘Knightner’ at SC HUD?

Clyburn should be serving time in federal prison. Enough people in the private sector uniting for a common cause can force him to be prosecuted.

Everyone knows, that the only reason he has not been arrested and prosecuted is simply because he is black. Its kind of like the Al Sharpton case with his millions in owed back taxes and tax fraud.

I support anyone who pisses off republicans and gets them frothing at the mouth. Clyburn has my unfaltering support!

You would bite off your arm to feed a greedy mouth?

look at it this way Bill Cosby is home more these days and so now the Poverty Pimp will have more access to THE SWEATER COLLECTION!!!!!
Fits please break out the sweater picture

Why are you singling out the African-Americans?

IS THE “FISH EYED FOOL” GONNA BE FRYING SOME MORE FISH?

For Diamond Jim the chances are slim he’ll escape a federal indictment for the 50 mil
And when God gets through with the corrupt black racist–he be in far worse shape still !!!