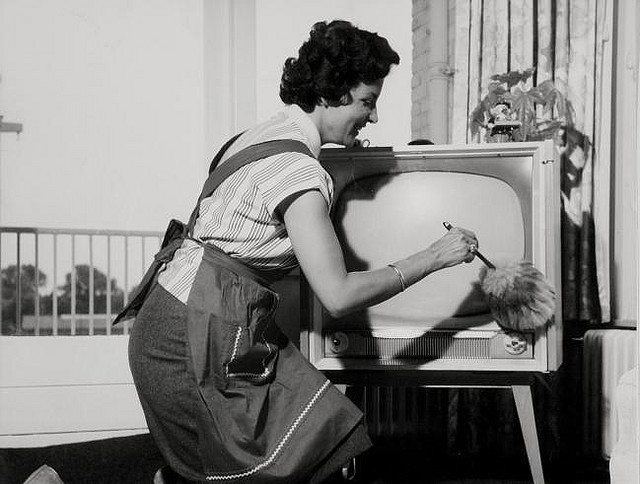 || By FITSNEWS || Are you a South Carolina woman between the ages of twenty-five and fifty-four? If so, you are the be-all, end-all of the local television market … which evidently exists to cater exclusively to your perceptions (at least as represented by a cardboard cutout).

“When you pitch, pitch to her,” an internal memo from a Palmetto State TV station reads, referring to a cardboard cutout of a woman representing this demographic.  ““When you write, write to her.  This is who we need watching in February.  Women 25-54 is her demo.”

Wow … we knew South Carolina’s mainstream media was bought and paid for.  And totally in the pocket of the state’s status quo.

But this?  This is ridiculous … it’s pure “fluff fabrication,” a manufactured product in pursuit of an audience, not truth in pursuit of the public interest.

The TV memo – discussed at length by reporter Corey Hutchins in an excellent post for Columbia Journalism Review – once again highlights the elemental, internal biases and self-serving motivations inherent in “journalism.”

To explore the subject a bit deeper, Hutchins interviewed Stanford professor James Hamilton – who has extensively researched the phenomenon of “newscaster pursuit of marginal female viewers.”

“What I’m most concerned about is what economists would call a market failure: that there are certain stories that people need to know as citizens, but they don’t want to know as consumers,” Hamilton said.

Can anybody say “rainbows and unicorns?”

Here’s how it breaks down: Either you’re on board with the whole “government is good” (a.k.a. “everything is awesome“) narrative – which is the mainstream media’s modus operandi – or you are by definition some radical, agenda-driven malcontent.  You know, the kind of voice Barack Obama wants to erase from the debate as he pursues “a better politics.”

And his idea of a “better country.”

Our question is simple: How’s all that fluff working out for you?

For the record, we don’t have any cardboard cutouts in our office (well, except this one of Charlotte, N.C. TV vixen Dianne Gallagher).  And we don’t cater our “pitches” or “writing” to anything other than the truth – especially when it involves children being stuck in failing government-run schools.  Or your pockets being picked.  Or rampant dependency being portrayed as “conservatism.”  Or media outlets providing cover for self-serving politicians.

Also, we think the notion that women aged 25-54 can’t handle the truth is profoundly insulting … especially coming from a media establishment that pretends to be “pro-woman.”

Don’t listen to us though … like our masthead says, we’re “unfair, imbalanced.”

UPDATE: For those of you keeping score at home, the station using the memo/ cutout is WSPA TV-7 (CBS- Greenville-Spartanburg, S.C.).  It’s one of several South Carolina news outlets owned by Media General.

Because it is. "We think the notion …women aged 25-54 can’t handle the truth is profoundly insulting" http://t.co/ATzLDL6tS1 via @fitsnews

@msynan Serving agendas while garnering profit generating ratings is the goal of national news networks.Plenty of $ in lobotomizing punditry

“The Quinndom” Gets Well Off Of Higher Education

Taylor: Lawmakers Must Stand Up For The Women Of SC