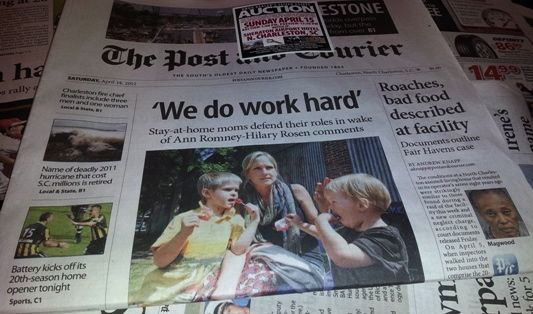 Earlier this month, this website delved into allegations that The (Charleston, S.C.) Post and Courier – the largest newspaper in the Palmetto State – was bullied into backing off of a major scandal involving powerful S.C. House Speaker Bobby Harrell.

(For the latest on Harrell’s ongoing saga, click here).

Why would the paper have done such a thing?

Well, one of the central components of our story was the allegation that The Post and Courier – whose former publisher spent countless hours in Columbia, S.C. lobbying lawmakers on behalf of an industry tax exemption – decided to “play ball” when legislative leaders threatened to close this tax loophole.

For those of you keeping score at home, South Carolina has dozens of sales tax loopholes – many of which are targeted to specific special interests.  In fact the state actually exempts more than it collects in state sales tax.

In the case of the newspaper industry, publishers are exempt from paying the state’s six percent sales tax on the paper they purchase to print – and the papers they sell to readers.  That translates into $13 million annually – money which goes straight into their pockets.

If South Carolina had a fund like this, our lawmakers could quickly and easily send surplus revenues, so-called “savings” and money from closing these loopholes directly to the taxpayers.

Doing so would not only make our tax code more competitive, it would slow the growth of government and put more money in people’s pockets.

Needless to say our state’s “Republican-controlled” S.C. General Assembly – which likes to boast about how “conservative” its leaders are – doesn’t want to do that.  In addition to growing government by leaps and bounds and preserving an anti-competitive tax climate, it is painfully obvious that these “conservatives” enjoy lording such special interest exemptions over the heads of their loyal subjects (most of whom fill their coffers every year with special interest campaign contributions).

Meanwhile … for the rest of us the beat goes on (bada boom da doom dada).

Since our report was published earlier this month The Post and Courier has – to its credit – resumed its reporting on the Harrell scandal (although its latest installment failed to follow up on several key components of his dubious self-reimbursements).

More on that later, though …

For now, lawmakers need to close this loophole and send this $13 million back to the taxpayers.  Then they need to start from the very top of the list of sales tax exemptions and start determining whether each one of them should be rebated as well.

But the newspaper exemption must be the first one to go … if for no other reason than it represents nothing more than an annual bribe to the state’s mainstream media (an infinitely corrupt arrangement that in our opinion materially contributes to South Carolina being one of the most corrupt states in America).